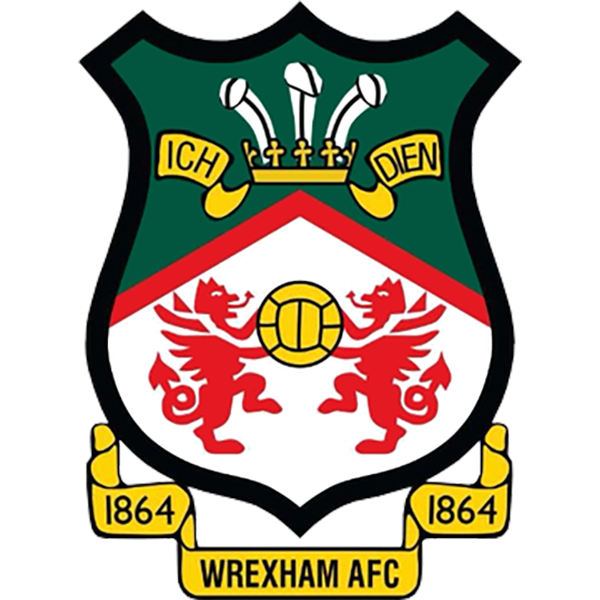 The Cards will be hoping to build on Tuesdayâ€™s improved performance against Bromley when they return to the Laithwaite Community Stadium this weekend to take on Wrexham.

Woking were excellent for large portions of the mid-week fixture, leading 2-1 and 3-2 before eventually succumbing to a dramatic 4-3 defeat. Moussa Diarra and Jack Cook goals cancelled out Jack Bridgeâ€™s opener in the first-half, the National Leagueâ€™s top scorer Michael Check equalised against the run of play, before Sam Dalbyâ€™s first goal for the club saw the home side regain the lead. But a goal of the season contender from substitute James Alabi and a late Jack Cook own goal saw the Lilywhites claim all three points. The league table remains unchanged with the Cards in 19th position, five points clear of Kingâ€™s Lynn Town and the bottom three.

Wrexham remain firmly in the hunt for a play-off place after thrashing fellow top seven hopefuls FC Halifax 4-0 in mid-week â€“ scoring all four goals inside 35 minutes â€“ and ending a run of three straight defeats which came at the hands of Notts County, Torquay United, and Stockport County. They are currently in seventh place with 50 points from 33 games, level on points with the Shaymen, who also have a game in hand. Bromley are just one point further back. Prior to their recent losses, Wrexham had been on a seven-match unbeaten run, stretching back to a 3-0 defeat at Aldershot Town in mid-February.

Please remember that this game is now a 12:30pm kick-off.

The Cards will be without three further players who have joined a growing injury list. Midfielder Ben Dempsey, winger Jamar Loza, and captain and full-back Josh Casey are all out. Ben Gerring, Sam Ashford, Matt Jarvis, Nathan Collier, Malachi Napa, and Josh Goddard also remain sidelined. Young striker Jayden Wareham also remains unavailable. Manager Alan Dowson will at least have been encouraged by the debut of AFC Wimbledonâ€™s Zach Robinson on Tuesday. The 18-year-old striker joins the club on loan from AFC Wimbledon, where he has featured seven times in all competitions so far this season, scoring once in the EFL Trophy.

Dean Keates is in his second spell with the club. The former midfielder, who also played for Wrexham between 2010 and 2015, became manager for the first time in 2016. He remained in charge until March 2018, winning 25 of his 73 games, before joining Walsall. After just over a year with the Saddlers, whom he also played for in two spells across his career, he returned to Wrexham in October 2019. They finished last season 19th, but stayed up relatively comfortably on the PPG method, and have been much improved this campaign.

Woking fans will be familiar with experienced midfielder Luke Young, previously a regular at Torquay United, who scored the winner against the Cards in a 1-0 victory for the Gulls back in September 2014. He made almost 150 appearances in four years at Plainmoor, having previously been a regular for their Devon neighbours Plymouth Argyle in League Two. He also netted one of his seven goals this season in the reverse fixture back in February.

The Cards into this game with reason for optimism, having ended a seven-match run without a win in 90 minutes by beating promotion-challengers Sutton United in the FA Trophy the previous Saturday. But a rejuvenated Wrexham, fresh from the news of a completed takeover from their new American owners, were comfortable winners at the Racecourse Ground. Luke Young and Dior Angus scored the goals either side of half-time.

Woking welcome old foes Torquay United to the Laithwaite Community Stadium on Tuesday. That will be followed by away fixtures at Maidenhead United and FC Halifax Town to complete the April games.

The Cards continued the league campaign with the visit of Hollywood backed Wrexham at Kingfield, on the day of the funeral of Prince Phillip. This forced kick off forwards to 12:30, and the weather was glorious as kick off approached. Alan Dowson was forced to make changes from Tuesday nightâ€™s thriller, with Josh Casey making way for Jack Cook, and Ben Dempsey for Tommy Block.

Wrexham began the brighter in a scrappy opening, the lively Reece Hall-Johnson having the first shot on goal, but he shot wide of Craig Rossâ€™ goal. On the quarter of the hour mark, Wrexham had a corner which was punched off the line by Ross, and then another corner was cleared off the line by Max Kretzschmar, before Ross was called back into action. A great cross from the right hand side was met by a free head of Jamie Reckord but Ross pulled off an excellent reflex save.

After this, the Cards began to create chances. Charlie Cooper was the first to test Christian Dibble in the Wrexham goal, an ambitious effort from 30 yards was slapped away by Dibble. Moments later, Jordan Davies went in for a 50/50 with Ben Gerring, the Woking man coming out worse, and Davies was booked. The Cards felt that they should have had a penalty, smart work from Zach Robinson and he was fouled in the box, but the referee waved away claims for a penalty. 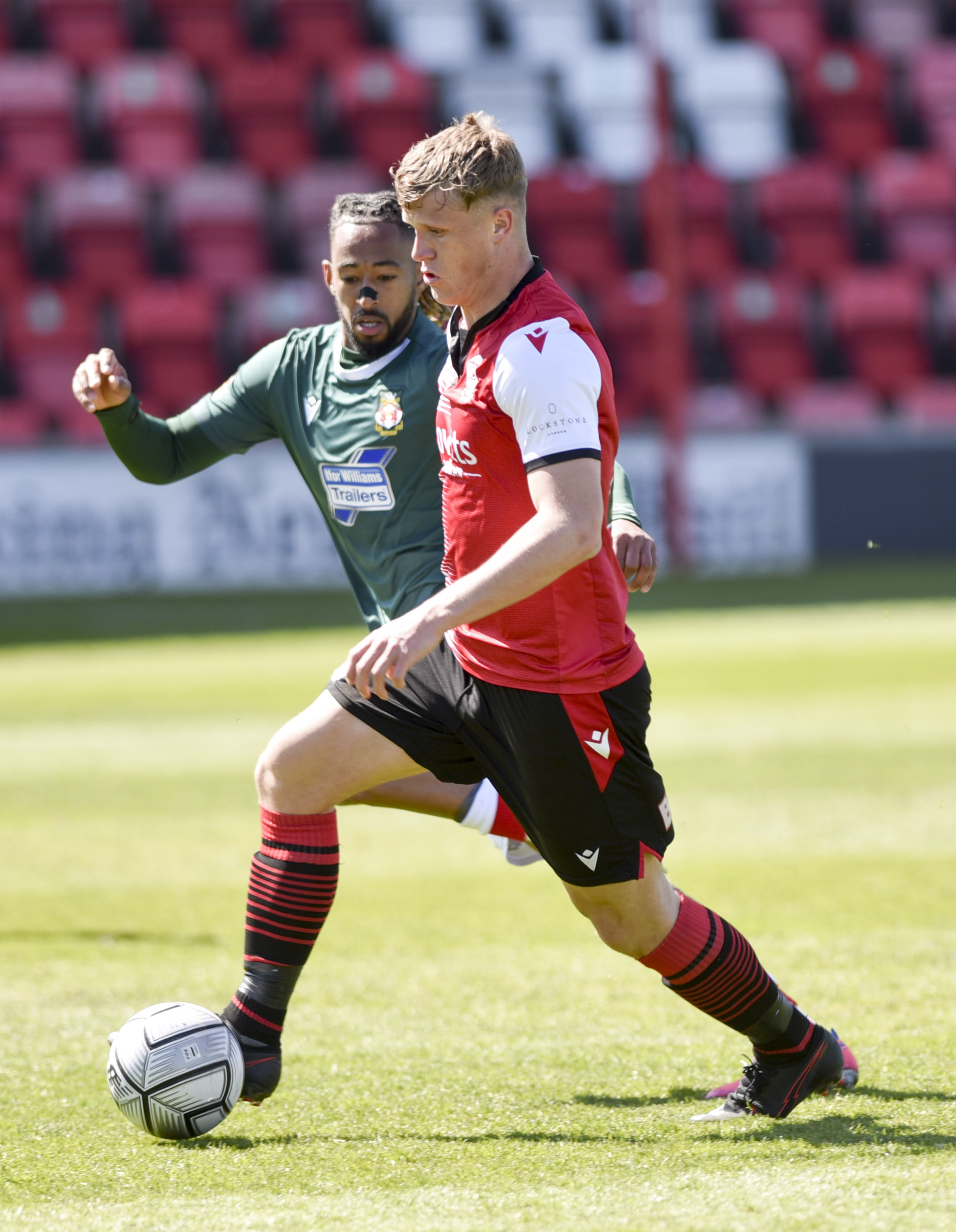 Wrexham themselves had a penalty after 36 minutes, Jordan Davies played through the Woking line, but was barged over by Ben Gerring. Luke Young was calmness personified as he slotted past Ross for the opening goal. Wrexham were able to comfortably see through their goal advantage into half time, the Cards disappointed that they were trailing at the break.

Woking began the first half with a quicker tempo, but no cutting edge, and Wrexham had the first real chance of the half, an excellent ball in from Luke Young was a touch away from doubling the Wrexham advantage, but Ross clutched the ball to his chest. However, with just five minutes gone in the half, Wrexham did double their advantage, a ball in from Reckord was dummied by Gold Omotayo, and Reece Hall-Johnson finished clinically at the back post, the ball hitting the post before it went in; Ross had no chance.

Woking were clearly shocked, and found themselves desperately trying to create chances to rescue something. A rare opening was well worked in the midfield, Kretzschmar blazing wide, which summed up Wokingâ€™s match in all honesty. Paul Hodges was introduced in place of Tommy Block, but was unable to create much with Wrexhamâ€™s backline holding strong. The game never really got going for Woking, Kretzschmar injured from a heavy tackle, which bought two stoppages for Wrexham, just as the Cards were looking to push on, and Kretzschmar went off with seven minutes of the game left, Sam Evans introduced for his Woking debut.

Wrexham added salt to the wound for Woking, six minutes added time were signalled, but this proved inferior for the cards, as Chris Sang fed Omotayo, who broke clear of the Woking defence and finished calmly past Ross. Wrexham were enjoying themselves, and wanted more goals, and with essentially the last kick of the game, Jordan Davies hit an excellent strike from the edge of the box into the bottom corner, Wrexham were rampant.

In terms of the season, this result didnâ€™t mean very much for Woking, although in terms of the future, it showed that much change is needed if the Cards are to improve significantly next season when they go full time. The quality of Wrexham shone through, and itâ€™s that sort of quality that Dowse is looking for in terms of the squad next season. The recurring theme this season seems to be that there is no lack of effort, just a shortage of quality which is why Woking find themselves adrift from the top half of the league.

Man of the Match: Craig Ross had another faultless game and was unfortunate to concede 4 goals