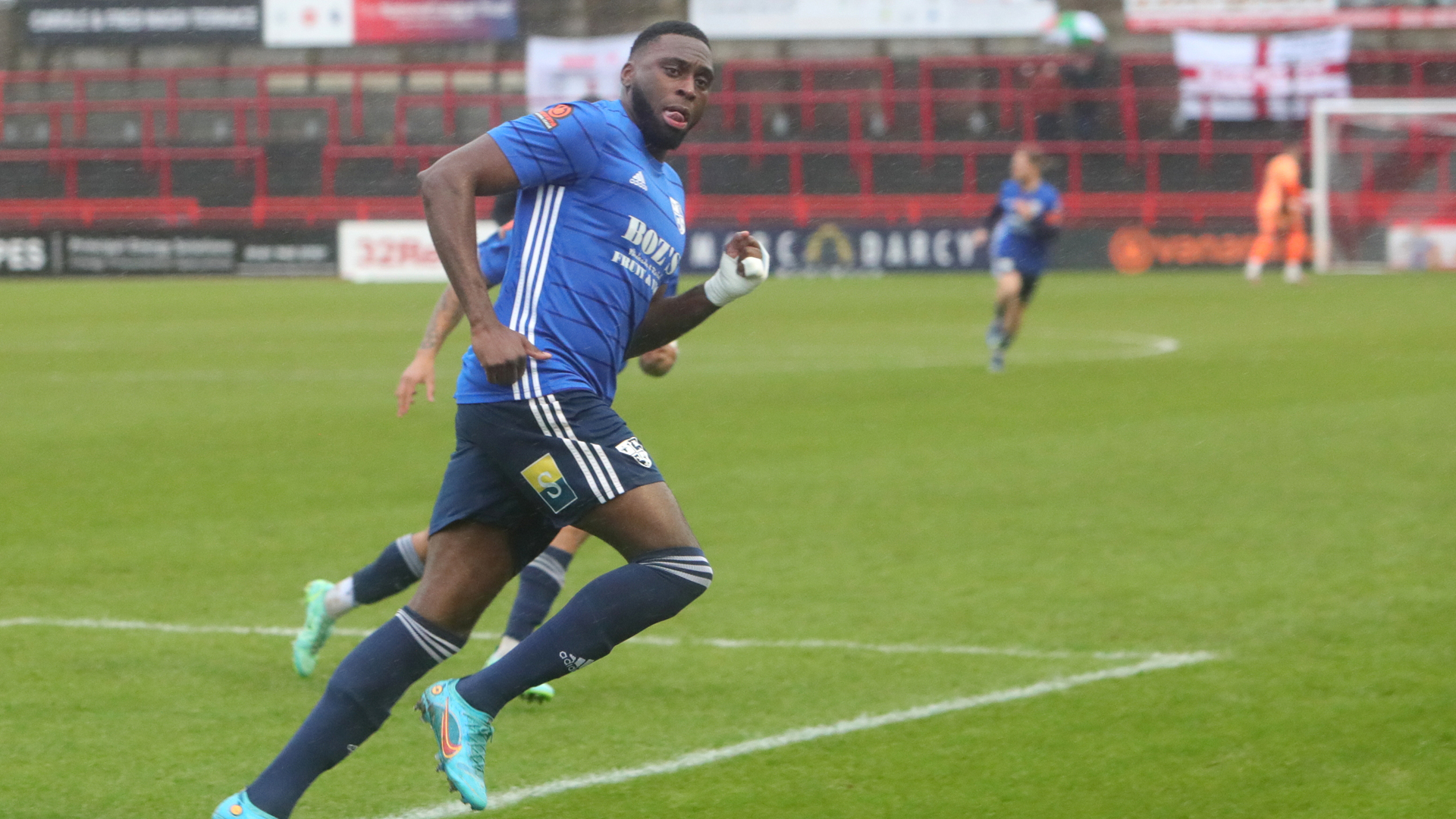 A second half double from Ryan Colclough was enough to leave Woking reflecting on two points dropped on the road, as a two-goal lead was squandered in the Manchester rain at Moss Lane. Colclough’s second goal on 84 minutes, rifling home at the near post from the left-hand side of the penalty area, left the crestfallen Cards reflecting on missed chances that should have put the game beyond the home side.

The end of this match provided such a stark contrast to the very beginning. After consecutive league defeats without scoring, Woking fans would have been looking to see an improvement in terms of attacking threat; and could not have dreamt of a more perfect start than that they managed at Moss Lane. Rohan Ince, winning the ball in midfield, played a direct, purposeful pass forward to Jamar Loza, playing just behind Inih Effiong. The number 7 played a delightful ball between the two home centre backs, into the path of Effiong, the striker advancing into the box and hitting a low left foot shot past the keeper, with just 15 seconds on the clock. 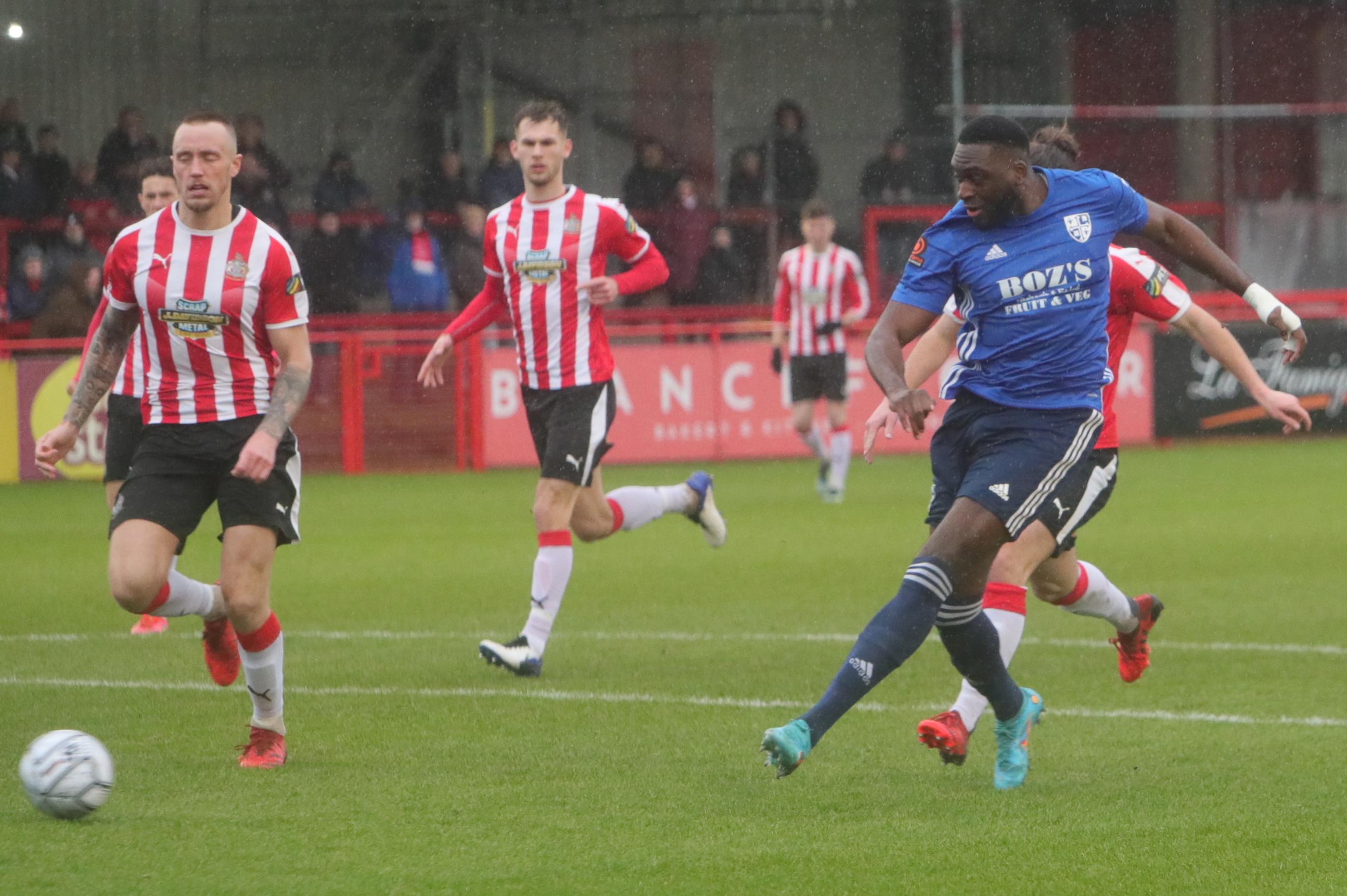 Alan Dowson made three changes to the starting line up from the previous League fixture against Yeovil Town. Louie Annesley, returning from suspension, stepped into the right-hand side of a back three alongside Moussa Diarra and reinstated skipper Josh Casey. Tarryn Allarakhia was preferred in the attacking midfield role to Solomon Nwabuokei, with Ince and Jermaine Anderson providing the engine room in the centre of the park. Much of Woking’s threat looked likely to come from the pacey and direct wing backs Kyran Lofthouse and Tyreke Johnson, who would be looking to provide the supply to the twin strike force of Loza and Effiong. New signing Jack Roles was among the substitutes.

Effiong’s strike provided the catalyst to a hugely eventful opening period. On 7 minutes, the home side, looking to reverse a dreadful recent run of form, found themselves with a great opportunity to level. Chris Conn-Hall, who joined the Robins this week on loan from Fleetwood Town, turned sharply in the penalty box and was upended by Annesley. Elliot Osborne stepped up to take the resulting spot kick, which was superbly parried away by Mark Smith, to the delight of the travelling supporters. Shortly after that Woking looked to drive home their advantage, Lofthouse forcing Tony Thompson into a sharp save and Allarakhia having a shot deflected onto the bar after Loza caught the home defence napping after they tried, unsuccessfully, to build play from the back.

The home side looked nervy at the back -perhaps unsurprisingly, given their recent poor form and their heavy defeat in the preceding game against Solihull Moors. Woking pressed the home side well, and this approach led to a number of errors which turned possession over to the visitors in dangerous areas. Despite defensive insecurities, Altrincham did carry a threat at the other end, as Colclough and Conn-Clarke forced Smith into saves from long range efforts.

Woking doubled their lead through an unlikely source in Kyran Lofthouse after 33 minutes. The young wing-back had previously only scored one goal for Woking (ironically against Altrincham in a 1-1 draw the previous season), however his second for the club was something special. Finding himself more central than his wing back role would normally lead to, Lofthouse picked up the ball in the centre circle and evaded two challenges. Driving towards goal, he unleashed a fine strike from 25 yards into the top left-hand corner.

Just before half time, Woking almost added a third in similar circumstances. This time it was Ince with a powerful break from the midfield; his shot was well saved by Thompson.

Woking emerged unchanged at half time, as did the hosts, and it has to be assumed that the message from Dowson would have been to continue to play in the manner of the first half, with positive intent and some encouraging attacking combinations from the midfield triumvirate, the wing backs and the forwards.

Woking controlled the first twenty minutes of the second half, coming close to adding to their lead on a number of occasions. Johnson and Loza combined well down the left, the latter firing over following a good pull back to the edge of the box. Johnson then came close with a free kick, which he bent over the wall but not beyond the dive of Thompson, who, despite being somewhat uncomfortable with the ball at his feet, was having a good game in the more traditional aspects of goalkeeping (he was later announced as the home side's ‘Man of the Match’).

Altrincham got themselves back into the match shortly after. Josh Casey, to his dismay, was adjudged to have fouled Conn-Clark. The Cards skipper was adamant that the contact was minimal, however he earned a booking despite his protests. Worse punishment was to follow however, as Colclough made a smart near post run to flick home the ball which was dangerously whipped in by Mooney.

This goal provided the home side, and crowd, with a much-needed lift, and Woking sought to respond positively. Lofthouse shot wide having been played in by Ince. Dowson then made his first change of the afternoon, Loza being withdrawn for Nicke Kabamba. Then, Woking contrived to spurn two excellent opportunities to put the game to bed. The first came on 76 minutes when Allarakhia pressed Jake Cooper in his own box, dispossessing the on-loan Rotherham defender and playing a low cross in towards Effiong. Whilst the cross was slightly behind the striker, Effiong turned but had his shot smothered by Thompson. Then, shortly after, Effiong was played through on goal following a fine pass from Allarakhia, although again the home keeper denied Effiong with a smart save, although the forward will feel he should have scored.

Unfortunately Woking were made to pay for their profligacy in a way that has been all too familiar in recent months. On 84 minutes, Woking were only able to clear their lines as far as to Colclough, just outside the box, who rounded Lofthouse and drove home a fierce shot at Smith’s near post, prompting jubilant scenes amongst the home support.

The visitors made a couple of further changes to try and snatch back the lead late on, Solomon Nwabuokei replacing Allarakhia and debutant Roles replacing Anderson. There was time for Woking to threaten on a couple of occasions in the four minutes of stoppage time added by the referee. Johnson, lively all match, crossed from the left but Kabamba couldn’t quite jump high enough to make the contact on his header that might have tested the keeper. Then, an exciting but brief cameo from Roles saw him twist and turn past the Robins left back and whip a dangerous ball into the box, however no Woking player could get on the end of the cross.

At the final whistle, Woking looked pretty despondent and stunned, reflecting on missed chances going forwards and a lack of solidity at the back. The home side battled well and Woking were not short of effort, however were left to reflect on failing to take an excellent opportunity to chalk up a valuable away win.

The Cards will now look forward to the televised encounter with Southend United in front of their own fans next week, hoping that they can take some of the positives from this display (two fine goals, some encouraging combination play going forward) alongside a more robust defensive display than they showed in the latter stages in Cheshire.