Nothing scares a football fan like a losing streak. For all of the spooky costumes strewn across Kingfield on this sunny October afternoon, the most frightening idea was that Woking would lose five in a row, in something of an homage to the graveyard of last Spring.

Fortunately, despite two goals that felt against the run of play, the Cards would bury the spectre of the last few weeks with a trio of goals that combined skill and character. Max Kretzschmar, Inih Effiong and Tahvon Campbell would do the damage against a threadbare Altrincham side that fought manfully, scoring twice from outside the box despite their limited number of shots on goal.

The Woking side saw a return to the three-at-the-back system that Alan Dowson has favoured so far this season, with debutant Louie Annesley taking the role of the currently suspended Joe McNerney. Other than that, the side was the same one that buried Notts County at the start of the month.

Altrincham, for their part, were dealing with something of a COVID horror show. The visitors fielded the best side they could from a squad decimated by isolation restrictions: Loanee Matt Gould replaced the ever-present Tony Thompson in goal, while outfield players for the Robins had only mustered 7 goals between them.

If such a threadbare team implied an easy ride, it didn’t materialise in the opening twenty minutes. Altrincham’s deep back four, combined with Woking’s man advantage being in their defensive third, saw an opening period that amounted to little more than sparring.

The Robins were happy to keep the ball wide and look for direct, counter-attacking balls in behind the Woking line that amounted to little; the Cards, on the other hand, were unable to string a moment of quality together on the attack early on. Tav Campbell’s long-range effort was the only shot in anger in the opening stages.

To be completely honest, the opening goal wasn’t much of a shot either. It came from Altrincham’s first real attack, moving the ball well from the right-hand side into the feet of Tom Peers in the left-hand channel. Standing up his namesake, Champion, the 26-year-old cut inside and curled an effort towards Ross. The Woking keeper was well-placed to divert the ball, but his dive came back to haunt him: the ball squirmed under his one-handed effort into the back of the Woking net.

The storming response that Cards fans would have hoped was, admittedly, a little slow to spark. The home side continued to dominate possession, with Kyron Lofthouse in particular standing out as a player who Altrincham struggled to dispossess. But barring a Moussa Diarra header that went out for a throw-in rather than a goal kick, shots were almost absent.

And then, with five minutes till the close of the half, a game of football broke out, sparked by the equaliser. Woking burst forward with intent, with Solomon Nwabuokei evading the Altrincham midfield before fizzing a ball into the left side of the penalty area for the onrushing Max Kretzschmar. The midfielder took the ball across his man and the opposition goalkeeper, toe-poking a left-footed effort under Gould that bobbled into the goal, to the delight of the LGS behind it.

Less than sixty seconds later, Woking were in on goal again – this time working from right to left, with Campbell shielding the ball on the edge of the area to play Effiong in on goal. The 30-year-old went down with Gould challenging him; the referee saw simulation rather than a penalty, and booked the forward, to his dismay.

Altrincham could have struck back within sixty seconds of that chance, with a good effort from range parried by Ross and then breakdance-kicked away before Peers could capitalise on the loose ball. While it didn’t seem significant at the time, a booking for Ben Pringle would shortly follow, with the half-time whistle capping off a busy period in what had been a quiet half.

The opening stages of the second half certainly offered more than those of the first. Indeed, Woking should’ve taken the lead with their first significant chance: a free kick from Kretzschmar on the left-hand side found Effiong in the six-yard box, only for the striker to toe-poke his effort over Gould’s bar under pressure from the defence.

While the dynamic of the game stayed the same, with Woking retaining the ball well and Alty looking to hit on the break, the Cards certainly seemed to exercise more control over the flow of the match. Both Lofthouse and Josh Casey enjoyed significant offensive moments, overlapping their forwards dangerously and picking out crosses that just over- or under-hit their targets.

On the hour, that pressure told. A ball across the Alty box from the right wasn’t properly cleared, pinging between Effiong and Casey in the Robins’ area on the left of goal. Both kept their composure, and after a tense few seconds, Casey’s flick gave Effiong the space to shoot. From a similar position to his miss at Maidenhead, he made no mistake this time around, bulleting a curled effort into Gould’s top-left corner. 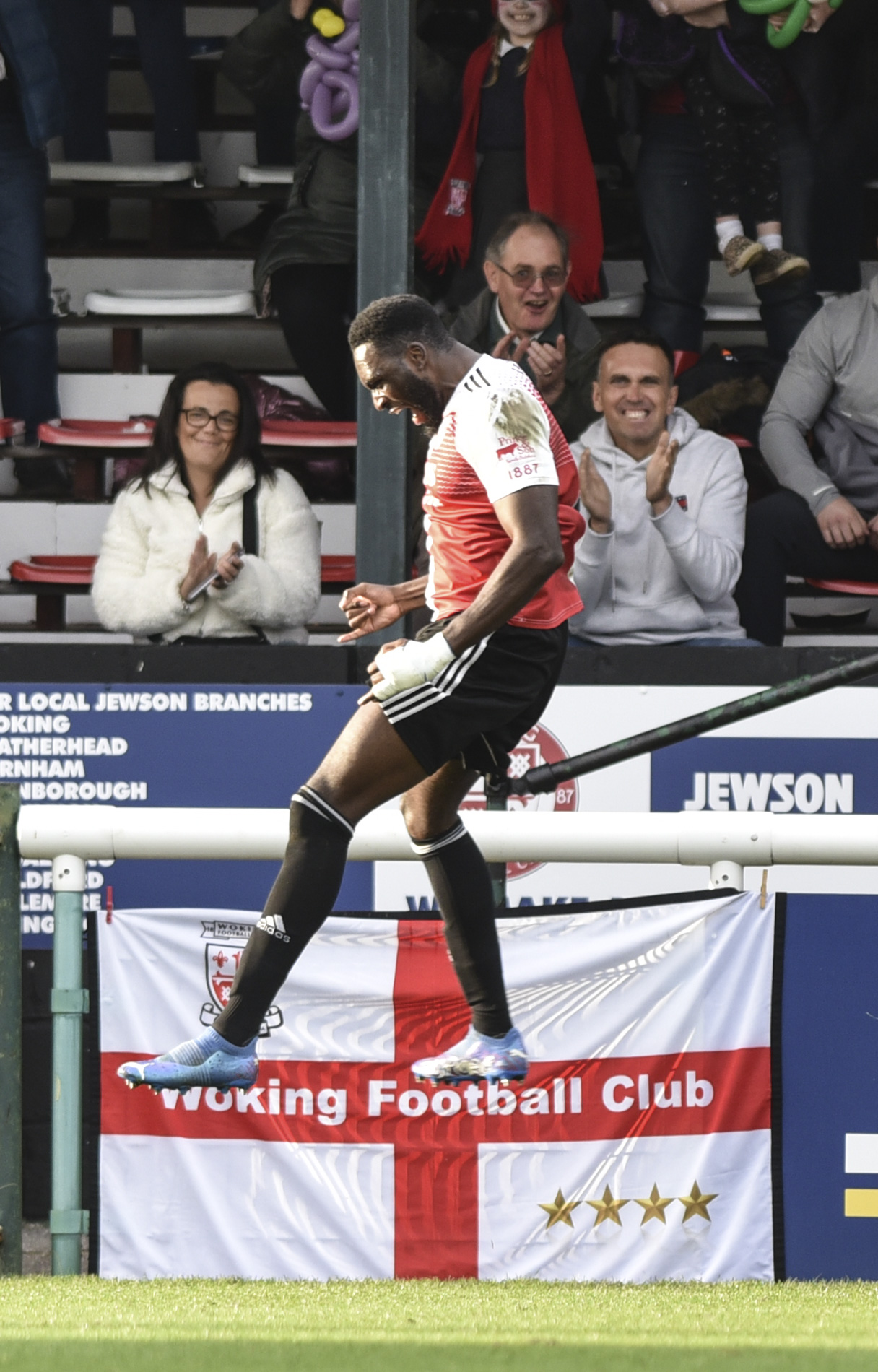 Despite their good work, the lack of away attacks, and the chants of “2-1, and you [inaudible] it up”, it would take the visitors approximately 90 seconds to draw level again. With Woking caught ball-watching down their right, it was Josh Hancock’s turn to run at an exposed Champion, cut inside his man, and fire at goal. There was no luck with this strike, a dipping howitzer that bent away from Ross and into the bottom corner. Game on – again.

Subsequent efforts from Effiong and substitute Sean Densmore would lead to tense moments, with both strikes from narrow angles batted away by their respective keepers. With Jordan Maguire-Drew warming up for the Cards, a change in system was expected.

But just as the midfielder stripped off to join the fray, the Cards found what would turn out to be the winner with a great move across the field. Cutting from right to left, the ball found Effiong in the left-hand channel of the Robins’ penalty area. Evading his marker, the forward rolled the ball across the opposition box to Kretzschmar, who bravely left it to find the feet of top-scorer Campbell. The 24-year-old has the tricks, and his goal was a treat: firstly the quick feet to open up the shooting opportunity, and then the fizzing effort across Gould to find the back of the net from close range.

To the relief of the home side, that was more or less the final significant opportunity of the game. A barrage of Altrincham corners late on would come to nothing, while Kretzschmar should have perhaps done better with a shot from range on the counter. The introduction of Kane Thompson-Sommers for Rohan Ince gave Woking some much-needed legs to absorb the pressure, and beyond some tense crosses, there was little of note to report.

The pressure was properly released by a last-minute sending off for Pringle, who picked up a second yellow for bringing down Lofthouse as the wing-back looked to break. From the resulting free kick, the ref blew his whistle, and the Cards had ended a run of four successive defeats in all competitions – just in time for the Halloween celebrations.

Man of the Match: Kyron Lofthouse. The wing-back was on the bench on Tuesday due to the change of system, and responded with a performance full of energy and positivity, beating his markers time and time again throughout the game.

Moor pain for the Cards as Solihull stroll to victory