Talk around a new ground for Woking has been around for years at this point, so it’s nice to celebrate the success of another in that field – particularly with an away win! Pre-season is well and truly underway for the Cards, with a twenty-two-player performance and three goals to celebrate the opening of Sheerwater FC’s new ground, hopefully heralding a new era of success for the club.

The Cards played two entirely changed elevens as they continued to work towards full fitness for the season. The first half team included a start for academy keeper Callum Backhurst – one of the heroes of the Woking Academy’s run to the Third Round of the FA Youth Cup – as well as a forward line that included two trialists, one of whom (Trialist #2) was Tahvon Campbell who signed a contract shortly after the game. There were familiar faces too, including Moussa Diarra, Josh Casey, and Max Kretzschmar.

Truth be told, the first fifteen minutes looked like the second game of pre-season. Woking were able to dominate possession without breaking down the home side in any meaningful way, with Trialist #1 firing over from range, and a clutch of free kicks from deep cleared away. Sheerwater’s 442 was bright and energetic, with Sheerwater #10 almost breaking through on the Woking goal until some tidy tracking back from Kyran Lofthouse averted his efforts.

When the first chance came though, it would open the scoring. The Cards caught Sheerwater high up the pitch through the middle, with forward George Oakley slotting Kretzschmar in on goal with defenders unable to reach him. The attacking midfielder – entering what is technically his fifth season in red and white – toe-poked beyond the onrushing keeper to open the scoring.

Seven minutes later, it was 2-0. The Cards were again able to transition through the middle, this time from left to right, driving in a cross that was bravely defended by the Sheerwater backline. The Woking midfield was able to recycle possession back out to the right, though, and the second ball in found Kretzschmar again at the far post. His nodded header down into the six-yard box returned the favour to Oakley, who opened his body up to wrong-foot the Sheerwater keeper and trickle a finish across him into the net. 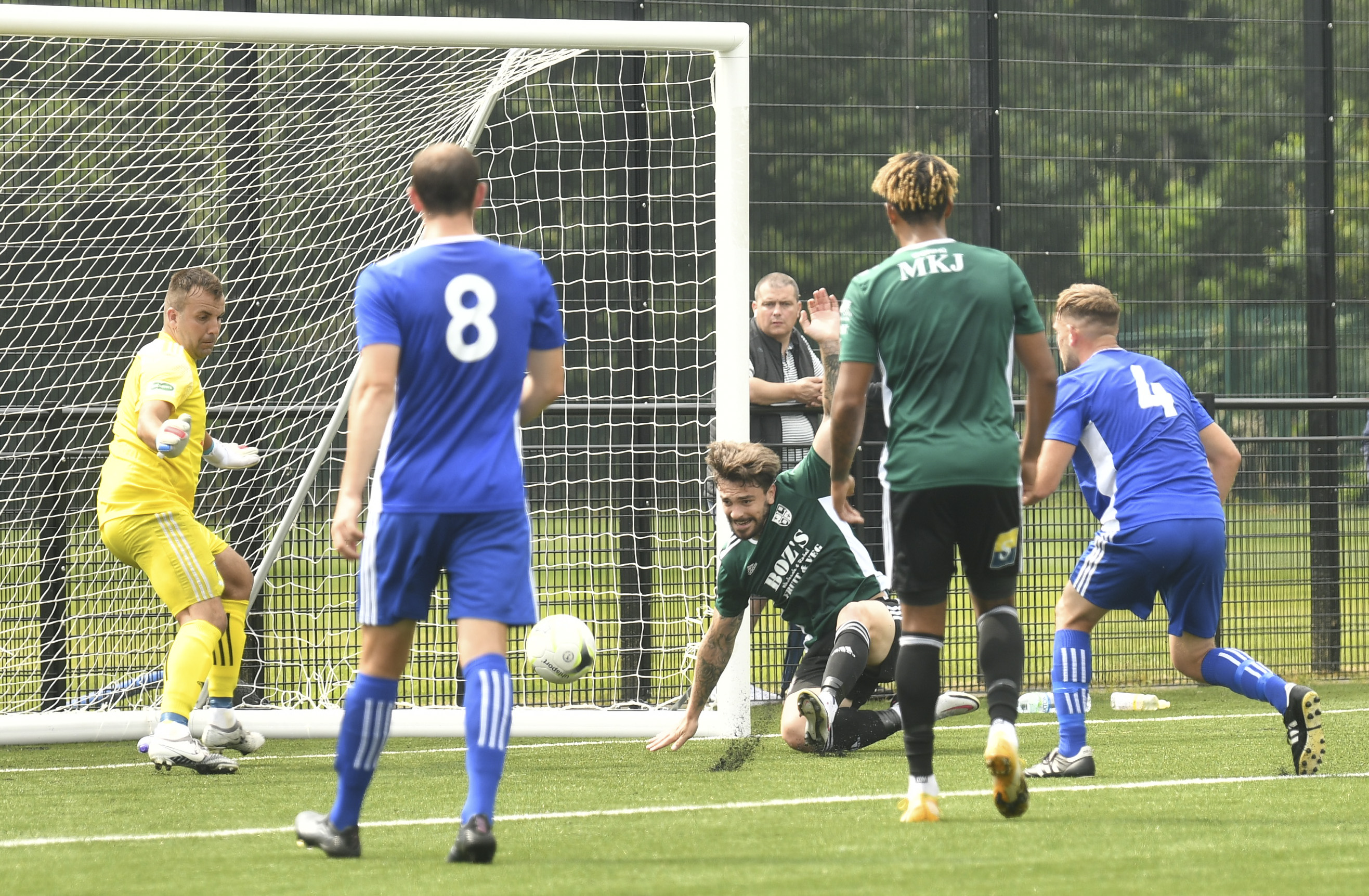 Oakley gets a final touch on his debut
David Holmes
In reality, it should’ve been three before half time. Kretzschmar nearly scored a scorching second with a superb drive from thirty yards, while the Cards looking increasingly dangerous down the left as Trialist #1 combined with Casey in the final third. The central midfield also caused Sheerwater problems, with Solomon Nwabuokei fizzing a left effort from the edge of the box that needed tipping round the post.

As it was, the visitors went in at half time two to the good. Barring some tempting set pieces from Sheerwater #8, the home side had done little to trouble Backhurst in the Woking net; it was near enough as professional as you could wish for.

The second half saw a total change to the starting XI, with a mix of first team and academy players taking to the field accompanied by two trialists in central midfield. Tyreke Johnson and Inih Effiong, two popular ex-Cards and the first two signings announced this summer, were among the standouts.

The half started as the first had left off, with the visitors doing all the legwork in attack. Johnson was the first to fire at goal, looping an effort from range over the bar, before Effiong pulled a full 360° spin to fire straight at Sheerwater #1. The former would then fail to find the latter with a fizzed effort across goal; it felt like pressure was building.

However, Sheerwater changes would stymie that momentum. The first team that had been run ragged by the Cards over the first period saw increasing injections of fresh legs that reinforced the compact, hard-working 442 shape employed by the home side. While Woking would continue enjoy possession and territory down their left-hand side, often effectively riding tackles and experimenting by the corner flag, chances were increasingly hard to come by.

That was further exacerbated by an injury to Johnson, who had to leave the field with fifteen minutes remaining. With all eleven substitutes already used, the Cards were down to ten men for the rest of the game.

While there was little more to talk about at either end, there was one moment of individual brilliance left to come. Trialist #3 picked up the ball in central midfield and was told to “turn and go.” That’s what he did: charging through the middle of the Sheerwater half, he rode one challenge, then two, faked past a third and – bravely ignoring a screaming Effiong demanding the ball – lashed a low drive across the goalkeeper and into the bottom corner. £5 well spent to all those who came down!

Minutes later, that was that: another milestone on the march towards the new season. Three goals and a shedload of sun wasn’t the worst of inaugurations for Sheerwater’s new ground, and the Cards will hope that it’s one of many small successes that build towards the best possible campaign this season.

Man of the Match: Max Kretzschmar. The midfielder was at the heart of almost everything during Woking’s best half of the game, scoring, assisting, and striking the post with a thunderbolt of an effort from range.