All the signs were there on Saturday afternoon that the Cards were on for a hiding in Greater Manchester, an unenviable club record staring Alan Dowsonâ€™s beleaguered side in the face.
But Woking took their underdog spirit to old heights, all the luck that had deserted them in this wretched season seemingly coming their way and offering hope a plenty for next term.

An away loss was always the most likely outcome, and it would have ensured a club record 11th straight defeat. As it was though, they ground out a spectacular draw that equalled their points tally from the previous dozen matches, albeit stretching a winless run to 15 games in all competitions.

That started in late March at Edgar Street with a narrow FA Trophy semi-final defeat to Hereford, but on the day the Bulls were getting a little comeuppance from seventh-tier Hornchurch at Wembley, Woking put on a mighty display of Isthmian-like resilience at Edgeley Park that many felt unlikely.

While Alan Dowsonâ€™s CV read three league wins and 18 defeats from 26 matches in 2021, home boss Simon Rusk - who replaced Jim Gannon in January â€“ was overseeing a team unbeaten in 16 league games, including 10 wins and just three losses this year, including a single-goal defeat to West Ham.

But this turned out to be the Hattersâ€™ third consecutive draw, fellow promotion hopefuls Hartlepool handed an unexpected chance to climb into the driving seat for a play-off first-round bye.

There was no shame in Stockportâ€™s performance, the hosts creating a club post-war record for 17 consecutive unbeaten matches in a season and creating enough chances to see off most National League outfits. However, on this occasion Woking â€“ with three previous wins out of three off Hardcastle Road - were made of far sterner stuff.

What a difference a noise makes, and from the start the hosts were buoyed by the returning faithful, the Cards also raising their game, even if in their case the inspiration came from the antagonisation, ready abuse and frustrated groans that followed their every small victory and act of on-pitch self-defence throughout this enthralling encounter.

Visiting skipper Craig Ross gave a sign of what was to come in the fourth minute, clearing with his feet from Macauley Southam-Hales after ever-lively Alex Reid and John Rooney combined and the latter â€“ Wayne Rooneyâ€™s younger brother â€“ delivered, Southam-Hales then going on a great run but unable to find Reid when it mattered.

Tom Walker won the first corner after Nathan Collier got in a vital touch, Rooneyâ€™s delivery finding Liam Hogan, who could only find the roof of the net, Stockport taking the game to their visitors.
A counter-attack fuelled by a Jack Cook long throw led to the defender looping the ball back in but failing to find a Cards attacker, while Leo Hamblin was back to clear the next Rooney centre, the resultant corner caught by Ross.

As Woking pushed back up, Zach Robinson went on a marauding run from the touchline, Stockport reticent to tackle and the ball somehow ending up in the side netting, a corner ensuing.

From the next away break, Woking came close at the far post, while as Stockport looked to re-establish early ascendency, Rooneyâ€™s free-kick from distance blasted into the Railway End seating.
Robinson remained a handful in the visiting attack, but there was a blow as John Freeman lost out to Elliot Newby then won the ball back illegally and was cautioned.

Woking were through on goal again as Charlie Cooper played in Sam Ashford, but the frontmanâ€™s finish was slightly hesitant and keeper Ben Hinchcliffe pounced.

Newby was next to go close with a header, just over, while Kyran Lofthouseâ€™s tackle on James Jennings led to a free-kick subsequently cleared for a home corner, Jenningsâ€™ centre flashing right across goal, no one able to supply the mere touch required to open the scoring.

The following home attack ended with a flashing shot that went behind for a Ross goal-kick, and while Woking countered - Cooper playing in Ashford, who combined with Max Kretzschmar before a finish denied one-handedly by Hinchcliffe - a lack of belief seemed evident.

Soon, Newby headed over from Ryan Rydelâ€™s cross from the left, while a Tom Walker corner played short to Newby found its way back to the taker, but Ross was equal to his low shot.

Then came the turning point, Lofthouse labouring for a free-kick on the right flank, Cooperâ€™s resultant set-piece from near halfway played deep, held up by Cook, leading to Kretzschmarâ€™s mighty finish from a narrow angle, the home crowd silenced. 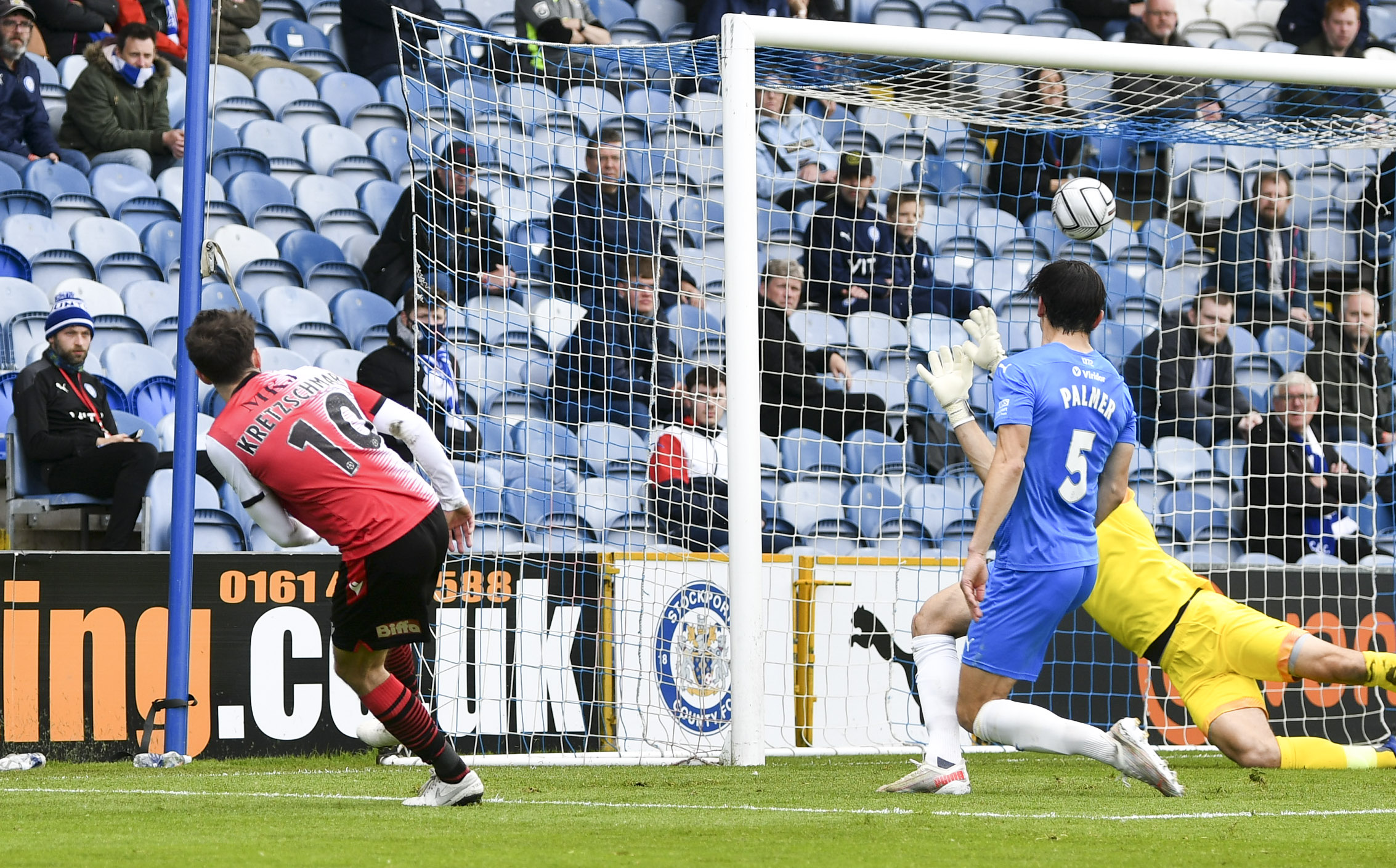 Robinson might have added a swift second, having more time than he suspected, but as so often the case this term a lack of concentration at a key point followed, great work by Southam-Hales leading to a Rooney shot deflected on to the left post, Reid firing back into the middle and unfortunate Ben Gerring deflecting home his low delivery, more or less on half time.

Woking had the first opening after the break, another promising long-range Cooper free-kick going through for a goal kick, while home defender Jennings was booked after tugging back Lofthouse.

But a concerted period of home pressure followed, Richie Bennettâ€™s opening effort leading to a great reaction save from Ross, the flag raised anyway for a foul, the same half-time striking replacement then heading over from the next Reid centre, while Walker fired just wide as home appeals for handball in the area were waved away.

Ross got down well to deny Reid, and while Gerring â€“ who put in a splendid second-half shift, no doubt stung by that unlucky equaliser â€“ headed away as the next danger ball arrived.

Collier was also on form, getting a vital touch as Southam-Hales tried to find Bennett, the following corner zipped right across the area and out for a Cards throw.

Collier headed away for another corner soon after, Southam-Halesâ€™ delivery causing flutters, while Cook did enough to cut out the next effort, leading to Lofthouseâ€™s break, linking with Robinson, winning a free-kick from which Cooper lofted the ball in but couldnâ€™t quite find Collier.

It seemed that Bennettâ€™s header from Walkerâ€™s delivery went over the line after cannoning off the underside of the crossbar - and County certainly appealed - but play resumed, and the ball was headed away for another corner.

As the ball came in again, with Woking under relentless pressure, Reid couldnâ€™t quite get his footing and struck over, Rooney also striking the right post, home fansâ€™ frustration mounting, not least after lengthy treatment for Cooper.

When Ashford broke through, he had time to do more but instead drilled a rather lacking shot that Hinchliffe easily dealt with.

Ross cut out the next home attack, home groans increasing as the clock ticked down, the visiting keeper then pulling off an instinctive tip behind from Ash Palmerâ€™s bullet far-post header from a 75th minute corner, then doing enough to deny Jennings from a follow-up Walker corner.

On that occasion, Gerring cleared as far as Reid, who set up Jennings, Ross again proving equal to his finish, Dowson introducing Jack Skinner and Malachi Napa in a bid to disrupt the flow. Yet the home pressure continued, Gerring having to cut out from Southam-Hales, the following corner put behind by Cook, with Cooper clearing the next home centre.

From there it was about trying to keep possession away from the danger zone, Lofthouse continuing to battle and winning another free-kick, Hinchcliffe this time plucking Cooperâ€™s delivery from the air, each Cards free-kick leading to more ire from the home crowd and team, Kretzschmarâ€™s legs as good as gone and Paul Hodges taking his place.

Cooper remained a menace, but soon Stockport were piling forward again, Jenningsâ€™ next corner flashing right across the goalmouth, going out for a goal kick, while Gerring half-cleared the next raid and Hamblin and Cook made great touches as the 90th minute arrived, Woking living on their nerves.

The six added minutes indicated would have been enough to finish off a lesser side, but Woking remained resolute, even instigating occasional forays forward, Ashford and Napa looking for breaks and Gerring the next beleaguered defender needing treatment, home torrents of abuse increasing as he hobbled off and back.

There was still time for a 55-yard Ross free-kick, but Hinchcliffe collected and the ball was soon back down Wokingâ€™s end, Hamblin again giving hope for the future, feeding Ashford in a rare moment of relief.

Stockport werenâ€™t done yet, another great Ross save following, while the crossbar somehow came to Wokingâ€™s rescue again, Ryan Croasdale then Reid denied, Gerring clearing, the referee soon signalling time to ensure an amazing point that few would have bet on before kick-off, and one more than UK Eurovision entrant James Newman managed later that night.

And that sets it all up nicely for Saturdayâ€™s finale, the home faithful set to return for the visit of Wealdstone, the last club the Cards managed to beat, way back on 23rd March.

Star man: Craig Ross - The Woking keeperâ€™s crucial shot stopping was not only crucial to this Great Escape, it also served as the personification of the battling spirit shown all over the pitch by a cobbled-together squad it was assumed would get a thumping on the day, but came out of this bruising encounter with heads held high, offering much hope for the future.