The match took place at the Silverlake Stadium in Hampshire on a cool and overcast afternoon.

The first half produced little action of note, but Woking had their backs to the wall shortly after the restart when Tommy Block received a second yellow and had to leave the field.

The Cards reshuffled and held out admirably with ten men; they even had a chance to steal the three points at the death. Eastleigh would have won but Craig Ross and his defence stood firm to claim a point on the road that had seemed unlikely once their numbers had been reduced.

After an impeccably observed minuteâ€™s silence in memory of HRH Prince Philip, The Duke of Edinburgh, the visitors kicked off and forced an early corner which resulted in nothing. This was a sign of what was to follow throughout the afternoon.

The fake crowd noise broadcast in the stand made for a strange atmosphere but both sides settled quickly, and Woking gained a second corner. From this there followed a stoppage in play whilst treatment to a leg injury took place which resulted in Sam Ashford unable to continue after barely six minutes on the radiant electronic scoreboard; he was replaced up front by Jonte Smith.

Shortly afterwards Block became the first player to find himself in the refereeâ€™s notebook after a foul. This meant that he had to exercise caution before attempting any subsequent challenges as the man in the middle was very quick to blow for the slightest of transgressions.

After eighteen minutes a cross into the box from the left by Tomlinson, looking for Baggie, was almost turned into his own goal by Moussa Diarra with Craig Ross stranded. Fortunately for both parties it went harmlessly wide of the post for a corner which came to naught.

Moments later it was the Eastleigh left back who was involved again as a strike from range was deflected behind for a corner to the Spitfires. Payne took this but it was cleared by the defence.

The best chance of the half came after 38 minutes. Another Payne corner eventually found Boyce, but the centre-back blazed his shot high over the bar. 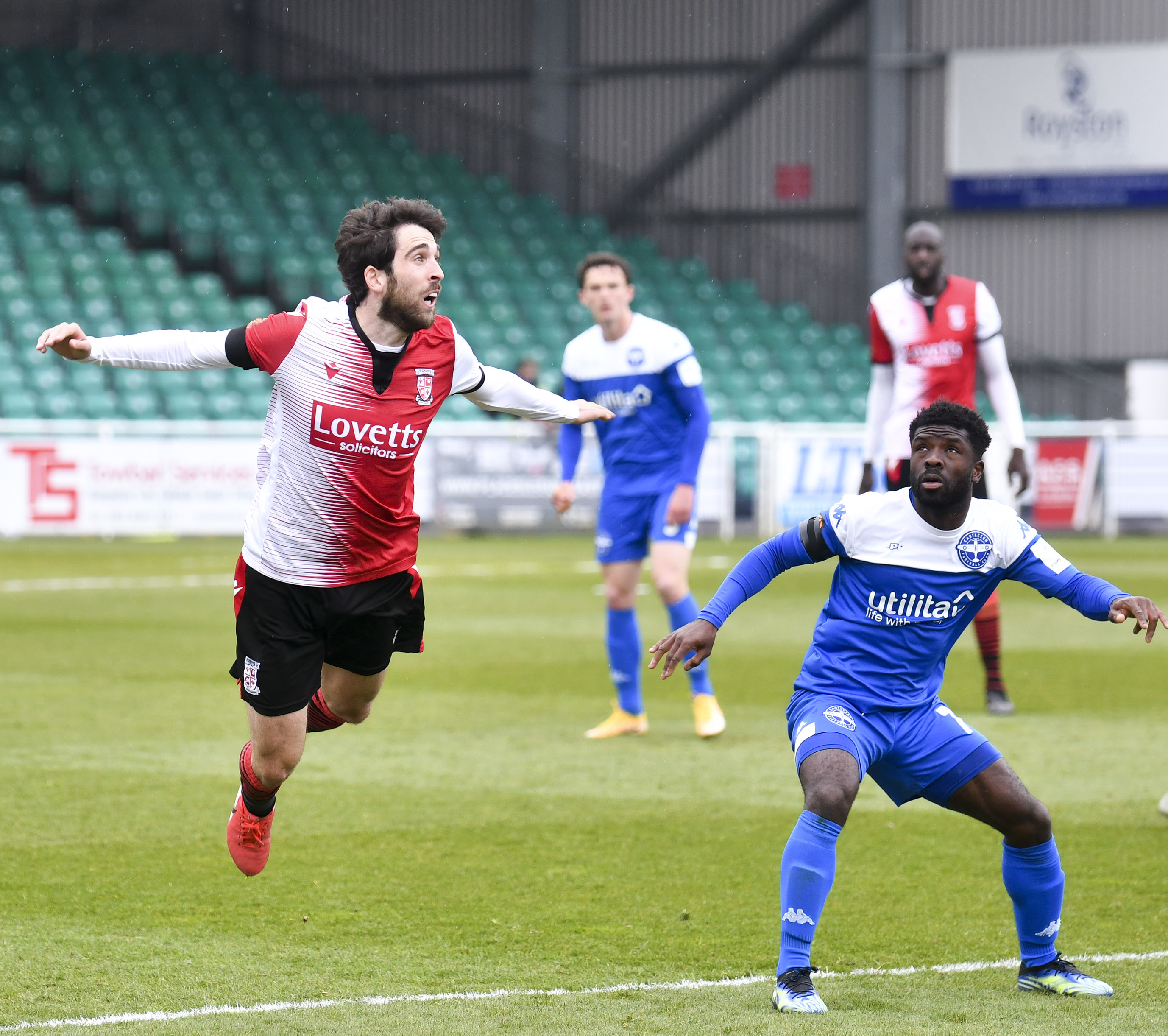 The last chance of a dull first half, extended by two added minutes, fell to Woking when Sam Dalbyâ€™s header was easily saved by the underemployed McDonnell, the visitorâ€™s first attempt on target.

A bright start to the second period ensued with a rare sight of the ball inside the box for Jamar Loza on 51 minutes, who cut the ball back but shot over, was interrupted two minutes later by the most significant event of the match by whistle-happy referee Robert Whitton.

A darting run forward by Baggie was cut short by Block as he tackled the Eastleigh winger on the touchline. The result was deemed to be a second yellow and Woking were reduced to ten men on 53 minutes. The Cards then made a tactical substitution four minutes later with Smith being replaced by Leo Hamblin; a rare occasion where a substitute is substituted.

Ten minutes after the numbers were imbalanced and with the pressure on the visitors building, Craig Ross saved well at the feet of top scorer House who had broken free of the defence. A minute later a cross from the left flashed across goal but fortunately evaded everyone.

In the 68th minute it was Diarra who almost gave Eastleigh the advantage again. A cross from the recently introduced Smart was deflected but fortunately for the Woking centre half, Craig Ross was able to turn the ball away and out of danger.

Two minutes later the home side were threatening to score again when a Tomlinson cross fell straight into the path of House, but somehow the usually reliable forward managed to hit the keeper with his effort from three yards out, another incredible acrobatic save from Craig Ross.
As the ball was being cleared, Payne tried his luck from the edge of the box. The midfielderâ€™s effort had the keeper beaten, but this time the woodwork came to the Cardâ€™s rescue.

The home side tried time and again to pierce the visitorâ€™s defence, but they remained resolute and watertight despite the onslaught. In the last of the four added minutes Max Kretzschmar at last found space to have a shot from distance but his radar was off-target and the chance sailed wide. It proved to be the last play of the afternoon in the match that ended goalless, just as it had between the sides earlier in the season in Surrey.

The visitors and their management team will have been pleased with the clean sheet especially after being reduced to ten men, but the lack of goals and creativity was once again evident and still needs to be addressed. They were certainly the happier of the two sides at the final whistle.

Woking now have three home matches to look forward to, starting on Tuesday against Bromley, and then games against play-off chasing Wrexham on Saturday and then Torquay United the following Tuesday in a hectic end to April.

Man of the Match: With two outstanding saves and a clean sheet Craig Ross ensured that Woking came away with a point from a game they would otherwise had lost