Top-of-the-table clashes are expected to be tight, tense affairs where the odd goal can make the difference; rarely does the visiting team go to a side above them and run rampant in their own backyard. For Woking fans hoping for an early Christmas present, the performance they saw at the New Lodge was one that even Santa couldnâ€™t have delivered â€“ they needed Dowse himself to provide it!

Following two games against National League opposition where profligate finishing was ultimately the difference between success and failure, it was third time lucky for a Woking side that blasted away their title rivals with a barrage of first-half goals. Efforts from Ben Gerring, Jake Hyde and Jamar Loza were consolidated by a wonder-lob from Max Kretschmar in the second half, with the result meaning that the Cards leapfrog Billericay into second place in the table â€“ two points off leaders Torquay with two games in hand â€“ just in time for Christmas.

Wokingâ€™s line-up was largely a return to Dowseâ€™s favoured 11, with Toby Edser recovering from a slight concussion on Tuesday night to make the team. Also in midfield was debutant Harry Taylor, boasting almost 50 League appearances at the tender age of 21, who joined the Cards on a monthâ€™s loan from Barnet in midweek. Loza returned to the side after being unable to play against his parent club on Tuesday night, with goal scorers Aaron Eyoma and Paul Hodges both moving to the bench.

The Billericay XI was almost unrecognisable from the side that Woking defeated 2-1 back in September, with key players like Adam Cunnington and Jake Robinson having been released as part of the Bluesâ€™ transition to a full-time model. Ex-Card Moses Emmanuel was one of the few to retain his place, as did ex-Stevenage â€˜good sportâ€™ Alan Julian to the delight of a number of Woking fans!

Cards fans hoping for a quick start to the game were almost rewarded, with Hyde played through on goal by Kretschmar within a minute. The hero of Swindon dragged his shot just wide of the near post, but the space he had found in behind the defence would prove a running theme in the first half.

The scoreline might suggest that Billericay were poor across the pitch, but that was far from the case â€“ they had plenty of the ball in the first half, and the game couldâ€™ve changed entirely if theyâ€™d taken one of their early chances. Midfielder Jake Howells fired a shot straight into Craig Rossâ€™s midriff early on, and a mistake from Gerring gave space for Emmanuel to put in a dangerous ball that ultimately went to waste. Howells and Devonte Aransibia combined particularly well throughout, but were unable to create anything telling.

The Cards would take the lead with their next big chance just fifteen minutes into the game, following a foul midway inside the Billericay half. Kretzschmar needs little invitation to put in a dangerous set piece, and his sumptuous ball to the back post was bulleted past Julian by the onrushing Gerring, scoring his third goal in just eight league games.

Just six minutes later, the visitors doubled the lead. Billericayâ€™s back four were giving Woking plenty of space to play the ball both over and between them, and another great direct ball from midfield played Loza into open space down the right-hand side. Alan Dowson brought the Maidstone winger in due to a perceived lack of pace and Loza showed it in abundance, leaving Danny Waldren scrambling to keep with him before rolling an easy ball across goal for Hyde to rifle past Julian.

With the home side reeling, the Cards could smell blood, and went for the jugular. Loza was denied a goal of his own just two minutes later thanks to a superb block on the edge of the box, with the winger then turning provider for Hyde to force a superb low save from Julian. Gerring would also miss the opportunity to bag a brace as the half wore on, with his diving header slicing harmlessly wide of the â€˜Ricay goal from a good position.

These attacks did leave Woking slightly more open, despite exceptional running from Taylor and midfield partner Christian Jolley. A Callum Kennedy corner â€“ whose set pieces were a danger throughout â€“ should have been bundled home by Aransibia, only for the Norwich loanee to fluff his lines unmarked at the far post, to the delight of the visiting fans.

The next goal would be crucial in the narrative of the game, and the 90 seconds surrounding it were the most accurate summary possible of the contest as a whole. A superb ball from the right-hand side ricocheted off the combination of Billericay forward Lafayette and Craig Ross, agonisingly wide of the Woking goal, for a corner. Kennedyâ€™s resulting cross was dangerous, but dogged defending saw the Cards pick the ball up on the edge of the box â€“ and within three passes, Loza was bursting in behind the defence down the left-hand side. His finish, waiting to sit Julian down before deftly guiding it over his head, was immaculate; the visiting fans, jubilant. 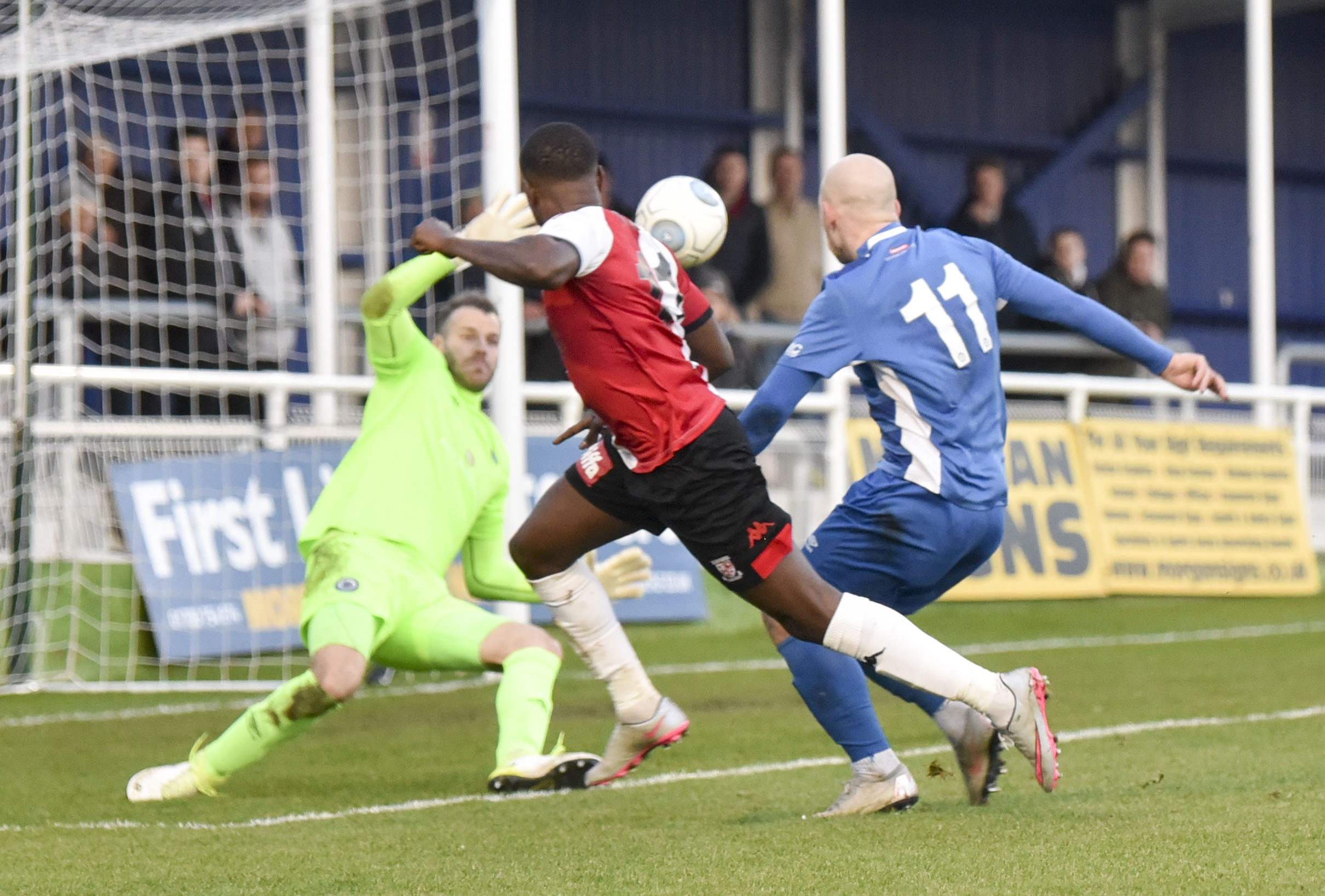 It was a great time to score, and brought an impassioned response from the players as it did the fans. Casey would have to replace his shirt at half time due to damage done during the celebrations. The half time whistle 90 seconds later drew Wokingâ€™s most efficient half of the season to a close, and left them in a superb position to secure what could be one of the biggest results of the season.

With the Billericay management recognising that major change was needed, two changes were made at half-time. Paul Rooney and the ineffective Alfie Potter replaced by Antiguan international Calaum Jahraldo-Martin and the dangerous Adam Coombes respectively. The latter had almost rescued a point for Billericay at Kingfield earlier in the season, and was a clear statement of intent for the second half, with the changes meaning that Billericay switched to a back three in an effort to commit more bodies forward and to close the distance between their defenders.

The commitment to trying to make amends was clear early on, with Howells forcing a strong low save from Ross just a few minutes into the half, and Gerring nonchalantly blocking a dangerous low effort moments later. At the other end, Woking were still looking to improve their lead. The dead-ball delivery was proving extremely effective, with Hyde finding himself free eight yards from goal after another great Kretzschmar freekick. His low drive towards the far corner was scuffed, but it still took the save of the game from Alan Julian to keep it out.

The next goal would change the course of the game; if it was Wokingâ€™s it was over as a contest, and if Billericay scored it would make the last half an hour a tense affair. As before a Cardinals sucker-punch would prove the gamechanger, but it couldâ€™ve been different if Adam Coombes had his shooting boots on. The forward found himself free just ten yards out after a great ball in from the left-hand side, but with the goal at his mercy, his tame effort was denied relatively easily by Ross.

Not more than a few minutes later, it was game over. Collier and Hyde combined superbly from a throw-in on the right, working the ball around two Billericay markers before the latter dinked the ball over the defensive line. Kretzschmar deceived the offside trap by charging onto the ball from deep, and rather than cutting inside to look for a cross, the midfielder floated the most delicious of chips over the despairing Julian into the corner of the net from thirty yards. Once again, the visiting fans exploded.

The effort had been valiant, but that moment of sumptuous quality utterly killed the game with half an hour to go. Billericay were allowed to keep more of the ball, and vaguely threatened with pot shots and driven crosses that couldâ€™ve ended up anywhere, but Coombesâ€™ miss would prove their last major chance of the game.

Woking should have added more shortly after the goal, but for good work from Julian to block Nathan Collierâ€™s cross and wasteful control at crucial moments. Dowseâ€™s substitutes looked to promote ball retention and stamina rather than forcing further goals, with Wheeler, Leighton and Eyoma replacing Edser, Hyde and Loza respectively.

The final whistle blew to rapturous support, with the Woking fans staying to a man to congratulate their team on the biggest win of the season against one of the best sides in the division. To take six points from the title favourites at the beginning of the season is a great testament to the hard work of the management and the players who have been with the club this season, and as we enter the busy Christmas period, Woking fans have plenty to be thankful for.

Man of the Match: Max Kretzschmar. â€œThe moodiest Iâ€™ve seen him and the best Iâ€™ve seen him playâ€� was the description from teammate Ben Gerring â€“ the midfielder was full of running, movement and creative intelligence for the entire ninety minutes. He started the show with a superb ball to pick out Gerring for the opener, and ended it by scoring what may end up as the Woking goal of the season. You could not ask for much more from a playmaker at this level.