Hydeâ€™s Header sends Woking in to the Third Round

Woking Football Club are through to the Third Round of the FA Cup for the first time in 22 years.

Jake Hydeâ€™s accurate header sent a large contingent of travelling Cards fans into rapture with the only goal of the game. A resolute and disciplined defence of the lead capped off a thrilling result which now sees the Cards join the 44 teams from the top two divisions of English football in the Third Round hat.

Having seen a return to form in recent weeks, Woking travelled to Wiltshire in high hopes of producing a performance to be proud of. Woking had been widely regarded as underdogs for the match with two divisions separating them from their opponents; however they knew that in the FA Cup a shock was always a possibility. As such, manager Alan Dowson made just two changes to the seemingly more settled team with Jamar Loza and Christian Jolley who was returning from injury coming into the team in place of Luer and Hodges.

In damp and overcast conditions Woking attacked the Town End in the first half. The conditions initially made play difficult and it took both teams time to properly settle. In one of very few chances in the opening stages, Twine cut the ball back for Iandolo who hit a swerving first time shot with his left foot. Gerring stood up tall and managed to put his body in the way, which narrowly deflected the ball away for a corner.

Once the game adjusted into more of a flow, the Robins began to apply greater pressure on the Woking backline. A free kick wide on the right was whipped into the penalty box by Doughty. Sensing the danger, Little scrambled across to deflect with a powerful defensive header. A minute later Town were in an identical position and played out a similar move with the same player involved. This time it was Gerring that read the flight of Doughtyâ€™s effort to head away.

As the rain began to drift into the faces of the Cards players it was evident at this point that they would have to apply some pressure themselves to stay in the game. The first surge forward started with Jolley marshalling the centre of the field with composure. His searching pass fed Loza who initially looked to be clean through. However, Lancashire read the play well and was able to track back and dispossess the Cards winger before he could carve out a shot on goal.

Sensing greater confidence the Cards pushed forward again. Edser fed Kretzschmar on the right who then embarked on a mazy run surging past Iandolo in to the penalty area. Tracking back Dunne produced a heavy challenge which appeared to bring the Cards forward to the ground. However the referee chose to wave away the protests for a penalty.

Moments later Jolley was adjudged to have been marginally second best to a full-bodied challenge with Dunne. Once he had received treatment referee Donohue felt it worthy of a booking for the Cards midfielder.

Having begun to reassert their dominance of possession Town came close to breaking the deadlock. Knoyle pushed forward along the right flank before zipping a cross over for Twine. Collier covered across well to get just enough on to deflect away for a corner.

A series of well drilled passes from the home side set Knoyle free again. This time his cross was headed away by Gerring but only into the path of McCourt 25 yards out. Having taken a touch to control the Robins midfielder hit a powerful shot that was acrobatically parried away by Ross.

Having had the bulk of play but little to show for it, Swindon started the second half by continuing to plug away at the Cards. Doughty fed McCourt who in turn laid off a through ball for Iandolo; having successfully tracked his man, Gerring was able to cut across and marshal the ball away.

In the 54th minute Jolley won back possession in midfield and squared the ball out wide to Casey. The Cards captain surged down the left flank in front of the Cards supporters before clipping an accurate cross towards Hyde at the near side of goal. Reading the play well, the Cards top scorer got up well ahead of Lancashire to accurately glance the ball down beyond McCormack and into the far corner of net. With the elation of scoring against the club that had released him earlier in his career, he charged towards the ecstatic section of travelling support to celebrate his ninth goal of the season. 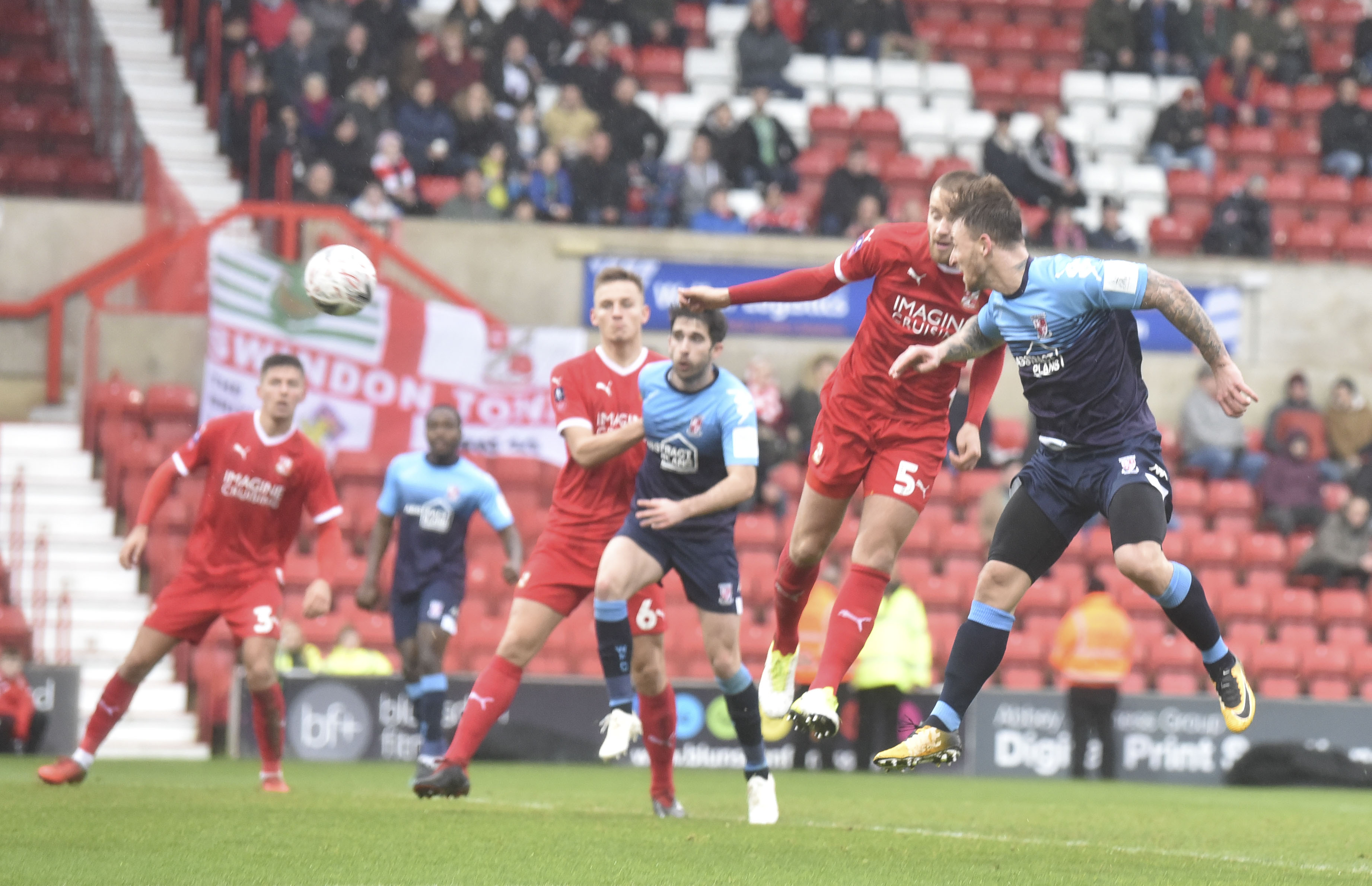 The vital blow for Woking from the head of Jake Hyde; pic: David Holmes

Swindon responded by making a couple of substitutions but initially found the ability to hit back difficult in part by the deteriorating weather conditions. With the rain at his back, Kretzschmar escaped down the left and skipped past a couple of challenges. When the cross was headed out by Iandolo, Little picked it up and placed an effort through bodies that narrowly trickled the wrong side of the far past.

Robins substitute Adebayo won a second ball and crossed in for Twine in the centre just five yards out. His first time shot was fiercely heading for goal though Collier managed to reposition well to brilliantly block the shot.

In the home sideâ€™s best opportunity of the half Iandolo later displaced the ball from Loza deep in the Cards territory. He then laid off to McCourt who was able to surge forward deep into the penalty area before squaring a pass across the face of goal to Doughty. The Robins striker snatched at his opportunity and scuffed a shot low to Rossâ€™s left which he was able to claw away to safety.

As the final minutes ticked down all eleven Cards players found themselves resolutely defending behind the ball. The home sideâ€™s frustrations grew and wayward passes from first Taylor and then Dunne showed that Woking were very nearly there. Substitute Luer proved a real handful for the Robins with his ability to keep the ball safely down the opposite end in front of the jubilant Cards fans to whittle away the final seconds of the game.

When referee Donohue concluded that his four added minutes had been completed, the Cards players leap towards the Woking supporters to celebrate a famous cup shock.

All attention now moves towards the draw for the third round on Monday evening. Who will the Cards draw next?

Man of the Match: My MOM: Jake Hyde. The whole back four defended as warriors throughout and Christian Jolley produced an outstanding performance on his return from a long injury. However this was Jake Hydeâ€™s day. In scoring one of the most memorable Woking goals against the club that released him early on in his career, Hyde will live long in the memory of Cards fans.