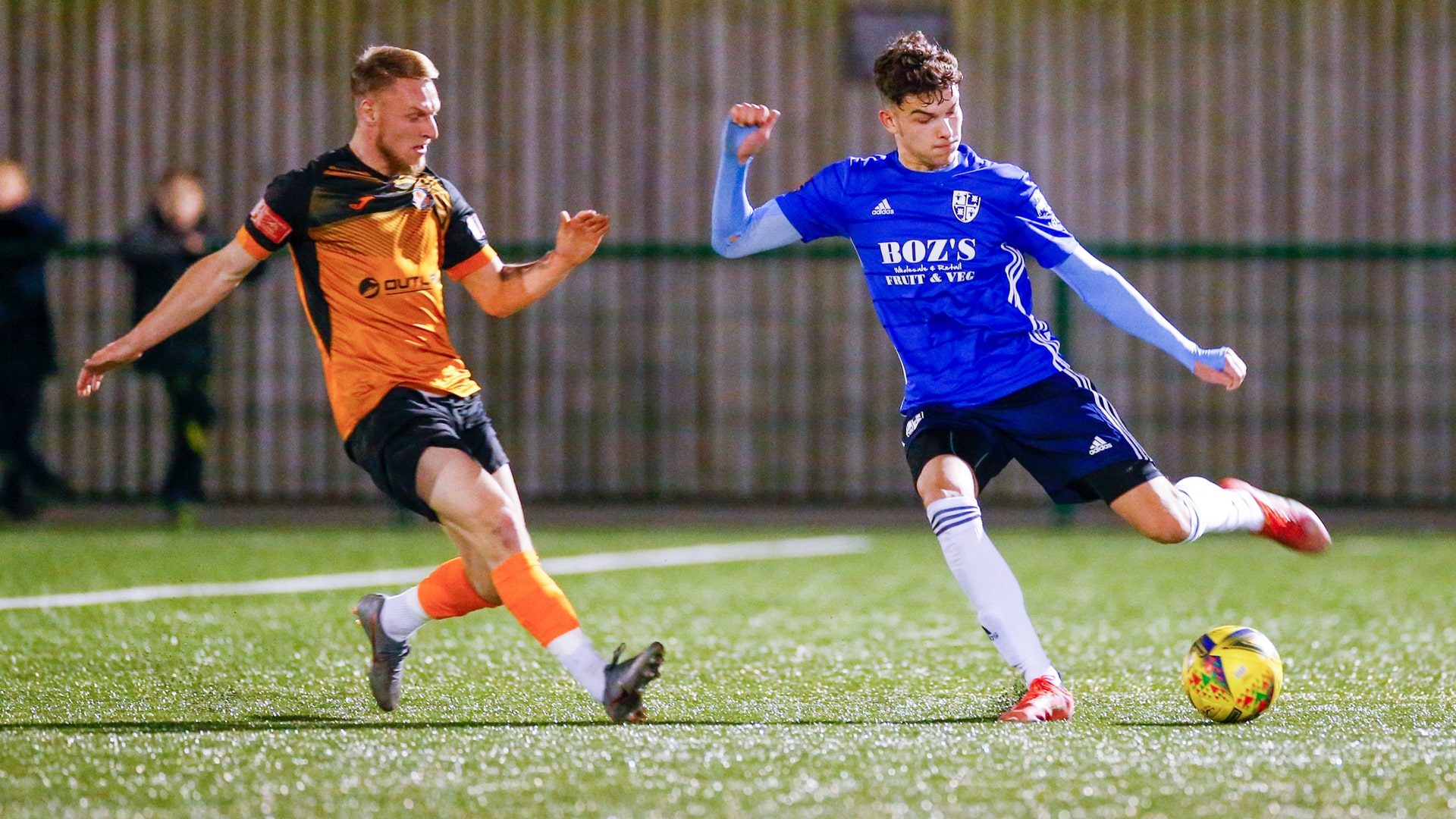 Woking made the short journey to the Elmbridge Xcel Sports Club to take on Walton Casuals in this second round tie, after both clubs had eased through the first round, on a very mild evening for early February. A fair-sized crowd had assembled by kick-off, many of whom were hopeful of a ‘cupset’ on the excellent, if dimly lit, artificial surface against opponents 43 places above them in the non-league pyramid. The Cards made several changes from their home defeat to Yeovil on Saturday with Craig Ross returning in goal and Josh Casey as Captain; there were also starts for Jack Skinner, Louie Annesley and Jake Rumble with Lofthouse, Effiong and Johnson on the bench.

The match itself was a very tight affair with defences on top until the final few minutes of both halves when Woking put extra pressure on their hosts to score with a fine 45th minute header and ultimately convert an added time penalty to progress through to the quarter finals against either Chertsey Town or Virginia Water. The Stags had plenty of possession and caused the Cards problems with their long throw-ins, forcing them into some timely interventions at the back and to keep their concentration with plenty of steadfast defending throughout the tie.

Woking kicked off in their change strip of blue and black towards the car park end. but found their opponents difficult to break down in the early stages of the match. The first chance fell to the home side when a long throw-in by Lelan was flicked on towards goal whereupon Craig Ross palmed the ball onto the post for Jake Rumble to clear the rebound and avert the danger. The Cards responded with a mazy run and shot by Jamar Loza which was blocked well by the home defence.

The next passage of play saw both sides trying to stamp their authority on proceedings, but this only resulted in a series of free kicks and long throw-ins which all proved fruitless as the defences held firm and remained resolutely watertight. Just after the half-hour mark, the ball was played into Loza’s feet but his path to goal was blocked and the end product was only a corner.

It was apparent that no space was being afforded to the visitors by a less-than-casual Walton team who had kept their shape and carried a threat going forward, especially from set-pieces.
With 37 minutes on the clock Josh Casey, on one of his many runs, created a chance which was cleared back to Loza who fired over the bar. The pressure was starting to build on the Stags with the Cards forcing them to concede a couple of corners, but the game remained goalless as halftime approached. The ball hit a Walton defender and there were cries of ‘handball’ but this was waved away by the man in the middle, along with a half-hearted shout for a penalty just afterwards.

The deadlock was broken as the stopwatch reached the 45th minute when Loza found space out on the left-hand side of the box for a pin-point cross to be headed firmly home by Jack Skinner into the far corner of the net to give Woking the lead on the stroke of halftime. This was due reward for their concerted pressure which finally enabled them to pierce the Stags’ defence to lead at the break.

Woking started the second half with Nathan Collier replacing Louie Annesley and almost immediately a great save by Craig Ross from Wiltshire prevented the scores from being levelled.
A heavy challenge by Gough then resulted in the first yellow card of the tie in the 51st minute.
The Cards then forced the home side back with a series of Casey free kicks and corners, with Loza and Tarryn Allarakhia in the thick of the action. The lead, however, remained a slender one with an hour played.

Walton’s captain McAuley was then replaced by Liddle and Kyran Lofthouse came on for David Longe-King. Woking thought they had doubled their lead after 65 minutes, but Kabamba’s effort was ruled out by the raised flag of the assistant on the far side. The Stags then had a good spell of play in attempting to restore parity, but their efforts were thwarted by a solid visiting defence.

Carvalho entered the action with 15 minutes to play replacing Rowe in the final change for the Stags. Goal scorer Skinner was then substituted with Tyreke Johnson taking his place on the pitch.
Josh Casey then had his name taken by the referee for a pull-back as the Stags drove forward.

Into the final five minutes and fitness was a deciding factor with chances coming and going for Woking to put the game to bed; firstly, a shot wide of goal by Nwabuokei and then a similar effort from Johnson when well-placed. It seemed that would be the end of the scoring until added time.

A great break down the left-hand side from Allarakhia saw him head into the box only to have his run halted by substitute Carvalho who conceded the penalty. Loza placed the ball on the spot and hit the ball high into the net for the second goal to seal the win. This was the last kick of the match as the referee blew immediately afterwards to signal the end of proceedings.

This was a professional performance from the Cards who will hopefully have gained confidence from keeping a clean sheet in a competitive game against opponents who never gave up and played well for the majority of the game. Next up is a trip to Altrincham on Saturday followed by the BT Sport televised match against Southend United on 12th February with a 17:20pm kick-off.

Man of the Match: Jack Skinner scored an excellent goal but Josh Casey clearly enjoyed himself, covering nearly every blade of non-grass and deserved the accolade on the night
Tags
Share Facebook Twitter Print