Woking rescued a point against ten-man Aldershot Town in a close encounter at the EBB Stadium.

Almost 3,700 people were inside the EBB for the annual Boxing Day clash between the Cards and their Hampshire rivals. With form guides putting the Shots near the top and Woking near the bottom, and of course with recent history in this fixture going against the Cards, you could be forgiven for thinking that this was going to be another long day for Alan Dowson’s side.

Woking lined up in the usual 5-3-2 formation, with Josh Casey appearing to occupy a space in the centre of midfield, possibly due to the absence of Rohan Ince, with Solomon Nwabuokei on the bench. Notable players for Mark Molesley’s Shots included pantomime villain Lewis Kinsella, with former short-term Woking loanee Jayden Harris on the bench.

As the players walked out at a boisterous EBB Stadium, there was a minutes’ applause for former Woking and Aldershot striker Marvin Morgan, who tragically passed away aged just 38 earlier this month.

The Cards started the game well, moving the ball quickly towards the wing-back pair of Tommy Block and Kyran Lofthouse. Tahvon Campbell was keeping the Shots defenders busy, and his very early shot was deflected into the hands of Aldershot keeper Laurie Walker.

The game developed into a scrappy encounter, with neither team being able to create anything clear cut. Woking dominated the ball but couldn’t break through the Shots defence. Inih Effiong found his way into the box, slaloming past defenders, but couldn’t pull the trigger and test Laurie Walker.

Campbell fired harmlessly wide after twenty minutes following a good run, before Johnson’s shot looped over the bar via a deflection. Kretzschmar’s corner was punched away by Walker, but only as far as Louie Annesley, whose flick almost crept into the corner of the net, but Walker was there to collect.

Former Shots man Jermaine Anderson was playing well in the Woking midfield, helping distribute the ball and turning neatly away from his marker. He almost fed Tahvon Campbell through on goal, but the ball zipped off the wet surface for a goal kick.

Woking had a golden chance to take the lead just before half time. Great play between Block and Campbell saw the latter put an inviting cross into the box, and Max Kretzschmar’s free header sailed agonisingly over the Aldershot bar. Johnson found himself in the book shortly afterwards for bringing down Alfy Whittingham on the counter attack, but the free kick amounted to nothing and both sides headed down the tunnel for half time.

Aldershot started the second half well, with Jacob Berkeley-Agyepong robbing Annesley of the ball, before firing just over the bar. The Aldershot midfielder won a free kick after being fouled by Joe McNerney, who was booked. Shots’ captain Kinsella stepped up and his effort was pushed behind by Craig Ross for a corner. Corey Jordan might have done better with his header from the resulting corner, firing over the bar whilst unmarked.

Alfie Saunders gave the referee a decision to make moments later, when he went into Max Kretzschmar with plenty of force. Referee Daniel Middleton dished out the red card, and Aldershot were down to ten men, with more than half an hour left.

The Shots reorganised themselves well, with Berkeley-Agyepong making way for Harris, and they frustrated Woking. Alan Dowson responded by taking Casey and Block off, and replacing them with Solomon Nwabuokei and Kyran Lofthouse.

Anderson found his way into the book after fouling Giles Phillips, as Aldershot frustrated Woking, winning fouls and stopping the Cards from getting any rhythm together. Tyreke Johnson’s free kick was headed just wide by Mo Sylla, before Anderson blazed over after good work from Lofthouse.

Disaster struck for the Cards with just five minutes of normal time left. Lofthouse was adamant he’d been fouled just outside his own box, but Kinsella picked up the ball and drove into the box. Tom Champion’s dangling leg made contact with the Shots’ skipper, and Daniel Middleton pointed to the spot.

Top scorer Corie Andrews took the responsibility of the spot kick, and calmly dispatched the ball away from the diving Ross. Aldershot had an unlikely lead and their fans celebrated with joy.

McNerney made way for Louis Britton as Woking desperately looked to rescue themselves from a devastating derby defeat. Walker had to tip Lofthouse’s effort behind for a Woking corner, but Aldershot cleared.

Tommy Williard was brought on for Andrews as the clock hit 90, and minutes later he had the chance to put the game to bed. A clearance from Alfy Whittingham was controlled well by the forward, and he ran through unopposed, before side footing the ball past the onrushing Ross, only for it to hit the far post and eventually find its way back to a grateful Ross.

Moments later, and drama at the other end. Kinsella attempted to clear the ball away, but caught Tahvon Campbell instead. Daniel Middleton once again pointed to the spot.

Max Kretzschmar assumed responsibility for the penalty kick, and with more than six hundred Woking fans struggling to watch, he stepped up and slotted the ball down the middle of Walker’s goal. 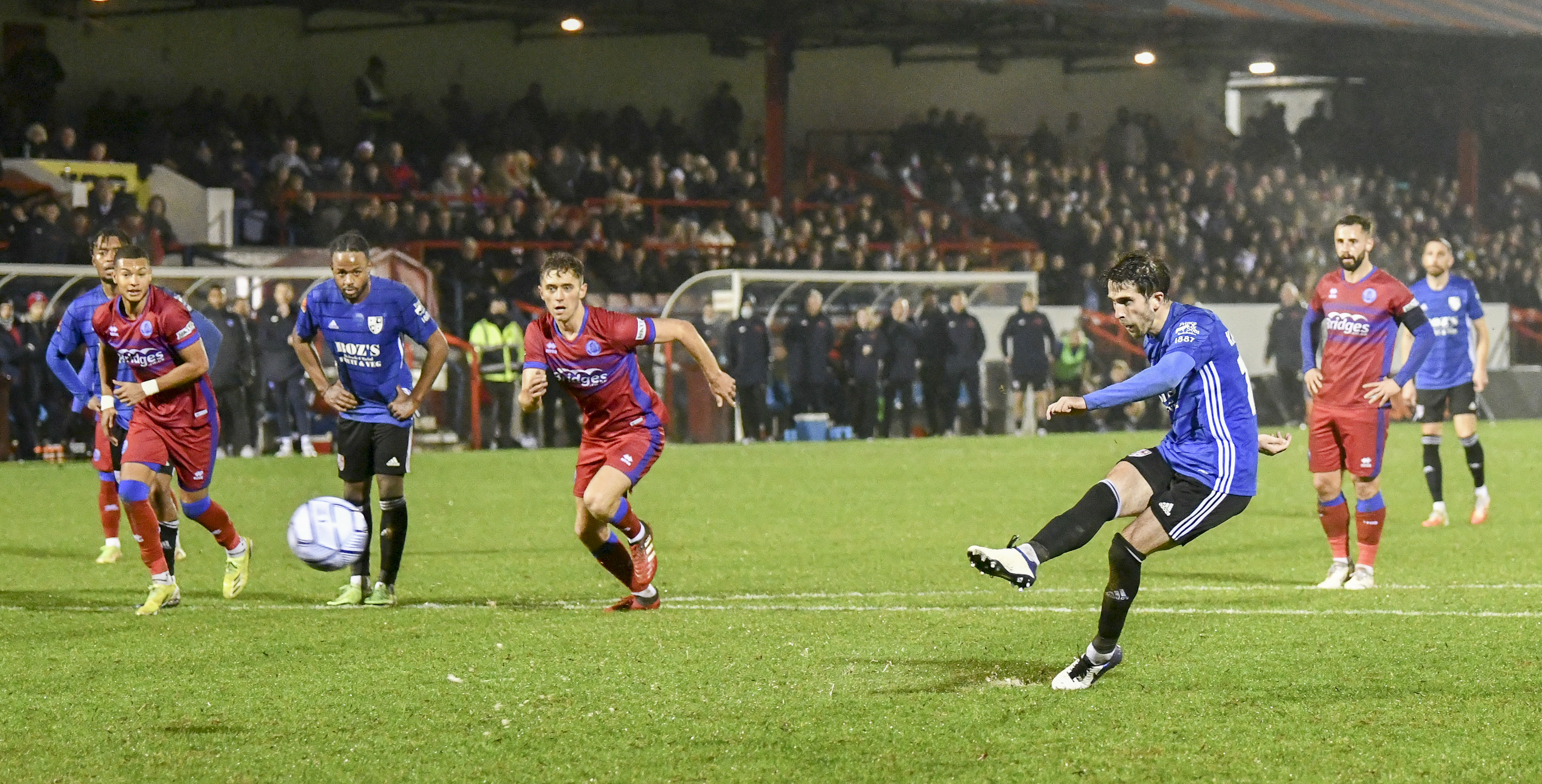 Full-time followed shortly after, relief for the Cards and their travelling fans, after a nail-biting match in Hampshire. Alan Dowson will hope that his side’s resilience will help them string a run of results together, with rock bottom Dover coming to Kingfield, before the Shots travel to Surrey for the reverse fixture. Woking have Kretzschmar to thank for keeping his cool and ending a run of four straight defeats in league and cup.

Man of the Match: Max Kretzschmar capped off a busy performance in midfield with an expertly taken spot kick under the most intense of pressure.
Tags
Share Facebook Twitter Print