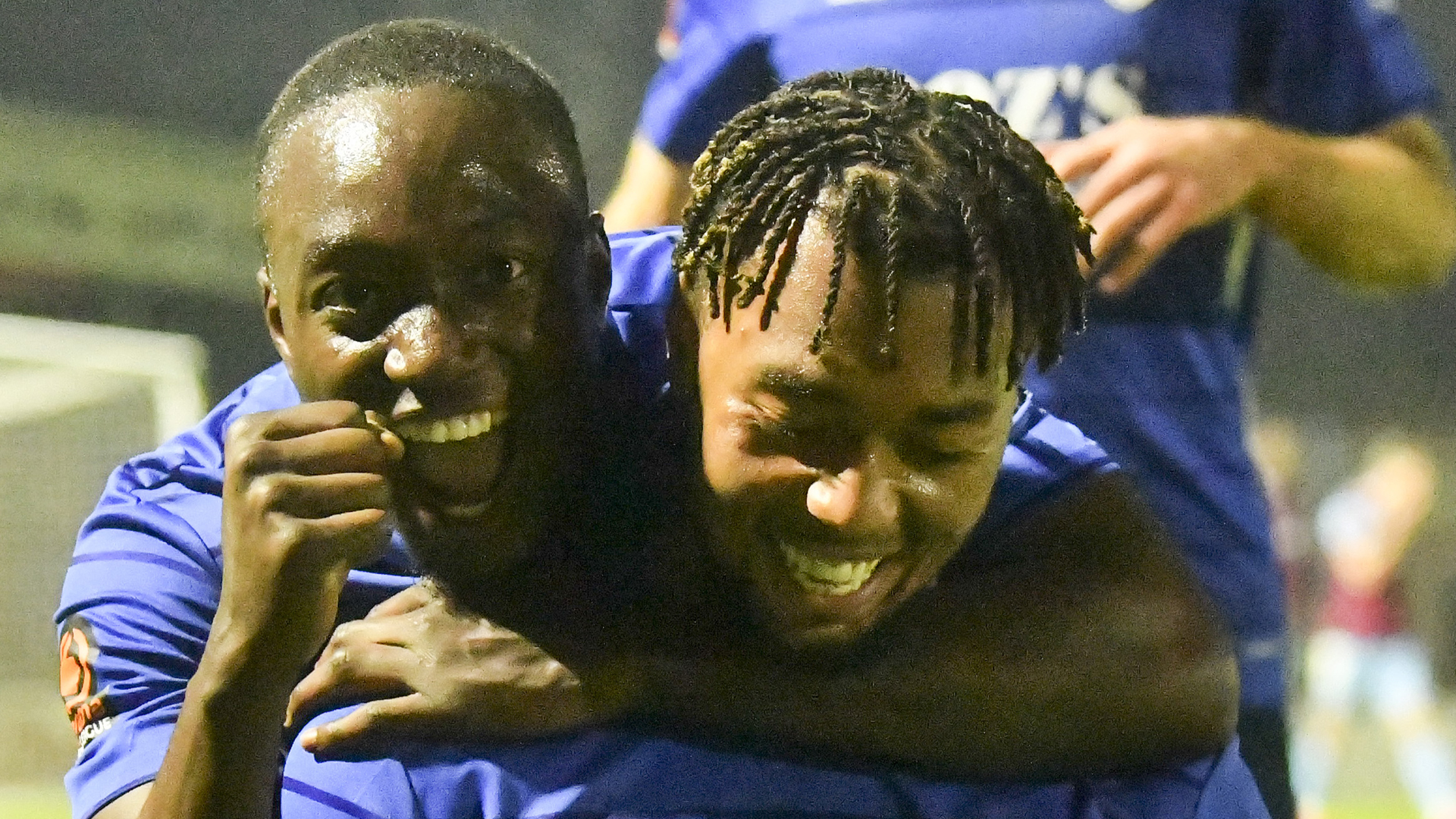 Tahvon Campbell’s twelfth and thirteenth goals of the season either side of a rare Rohan Ince strike helped the Cards condemn Weymouth to three straight defeats in a row, despite a late fightback from the Terras.

On a baltic Tuesday night by the Dorset coast, manager Alan Dowson made three changes from the side narrowly defeated by Stockport, with one enforced, as the unwell Craig Ross made way for Mark Smith to make his first start of the season. Tyreke Johnson made way for Inih Effiong, and Joe McNerney was back for his first game since being sent off at Maidenhead, replacing Tom Champion.

The Cards started well, a speculative effort from Max Kretzschmar flying just wide of Ross Fitzsimons in the Weymouth goal. Weymouth were looking to exploit the left flank of Woking’s defence, with a link up developing between right back Josh Leslie-Smith and busy winger Sean Shields. Shields forced the first save from Smith, an inch-perfect ball met by the ex-Ebbsfleet man, who volleyed straight at Woking’s ‘keeper, who was able to get his body behind the ball.

The Cards continued to put the pressure on, and had their reward after thirty four minutes. A dangerous corner from Kretzschmar was bundled over the line by Campbell, who was off celebrating after the referee and linesman gave the goal with no hesitation.

Smith was back in action, producing an instinctive save to stop Taofiq Olomowewe’s header squirming underneath him. Ince almost got Woking’s second on the stroke of half time, his low curled effort from outside the box left Fitzsimons stranded as it glanced off the post and behind.

Weymouth started the second half on the front foot after the introduction of new signing Tom Blair for Leslie-Smith. Shields continued to get down the wing and put dangerous crosses into the box, as Woking were pushed back. Omar Mussa in particular was a strong outlet for the Terras, keeping the ball well and distributing to the wide men,

But just after the hour mark, Woking made it two against the run of play. A long free kick was flicked on by Effiong into the path of Ince. He showed magnificent composure to turn his defender, before firing the ball past Fitzsimons.

Woking’s two goal cushion would last a mere four minutes. An excellent corner from Mussa was met by a towering header by Tyler Cordner, game on.

Both teams made two changes shortly after, with Loza and Solomon Nwabuokei making way for Tom Champion and Tarryn Allarakhia. Weymouth replaced dangerman Shields and Bradley Ash with Brandon Goodship and Martell Taylor-Crossdale.

As Weymouth started throwing men forward, Woking looked to hit them on the counter, with Allarakhia finding space to run with the ball and feed Effiong, but Fitzsimons saved comfortably. The Cards put together the move of the match shortly after, with a counter from a Weymouth free kick ending with a perfect through ball from Kretzschmar finding Campbell, and he finished calmly past the Terras keeper to surely put the game to bed.

Kretzschmar made way for Louie Annesley straight after, but as the clock ticked into injury time, sloppy Woking defending from a corner allowed Andy Robinson the time and space to lash the ball past a helpless Smith into the far corner.

Campbell finished the game on the sidelines after feeling his calf, but Woking held on to claim a crucial away win, delighting the excellent travelling support. This result leaves the Cards with eight wins and eight losses so far this season, and with the second top scorer in the National League in Tahvon Campbell. Alan Dowson will be desperate for his side to pull off back to back wins when they host Barnet on Saturday.

Man of the Match: Tahvon Campbell made the difference with two goals, he has been on fire for Woking this season.
Tags
Share Facebook Twitter Print