The Cards do like to be beside the seaside

Dowse’s men were back to winning ways on the road as they brought three points back from the UK’s newest city, against a side lacking any threat or real fight.

Whilst anticipation bubbled around the ground, a good-sized crowd commendably commemorated all servicemen and women alongside playing and coaching staff on this final Saturday prior to Remembrance Sunday.

With International call ups (Annesley), unavailability (McNerney) and recent strong performances (Loza, Johnson) causing extra selection decisions, the line-up and formation was shaken up with Effiong dropping to the bench and starting with the favourable back 3, with Casey slotting in on the left of the line.

Southend looked to have a chance instantly as a high Woking back line had to contend with a quick start by the hosts, Woking’s last man Diarra made a vital interception reaching with a high boot on the halfway line, preventing the Southend frontman Murphy from going straight through.

For the majority of the half, chances were hard to come by for both teams, leading for a quiet half for Ross, in particular. We saw glimpses of the forthcoming threat as the Cards pushing on. There being the back three, permitted Moussa Diarra to push on at set pieces, which proffered an aerial threat that drew saves from Arnold around the 15-minute mark. His presence also caused injury to Hobson who tumbled into the goal with Diarra as he returned to ground level.

Max Kretzschmar, always the creative spark in the middle, hassled and made most of the brief moments that did happen, happen; putting pressure on defenders to concede corners, threading slick balls out to Loza and to Nwaboukei who made incisive runs through into space. Jamar Loza, himself, found plenty of joy out on the left in this half, getting luck in beating men and drawing fouls that led to free kick threats.

The deadlock was broken in the 22nd minute with Loza making gains again on the left, crossing into the box, which looped nicely, being met by Tahvon Campbell. He brought it onto his left, then placed it perfectly in the bottom left corner, to claim his 10th goal this term. 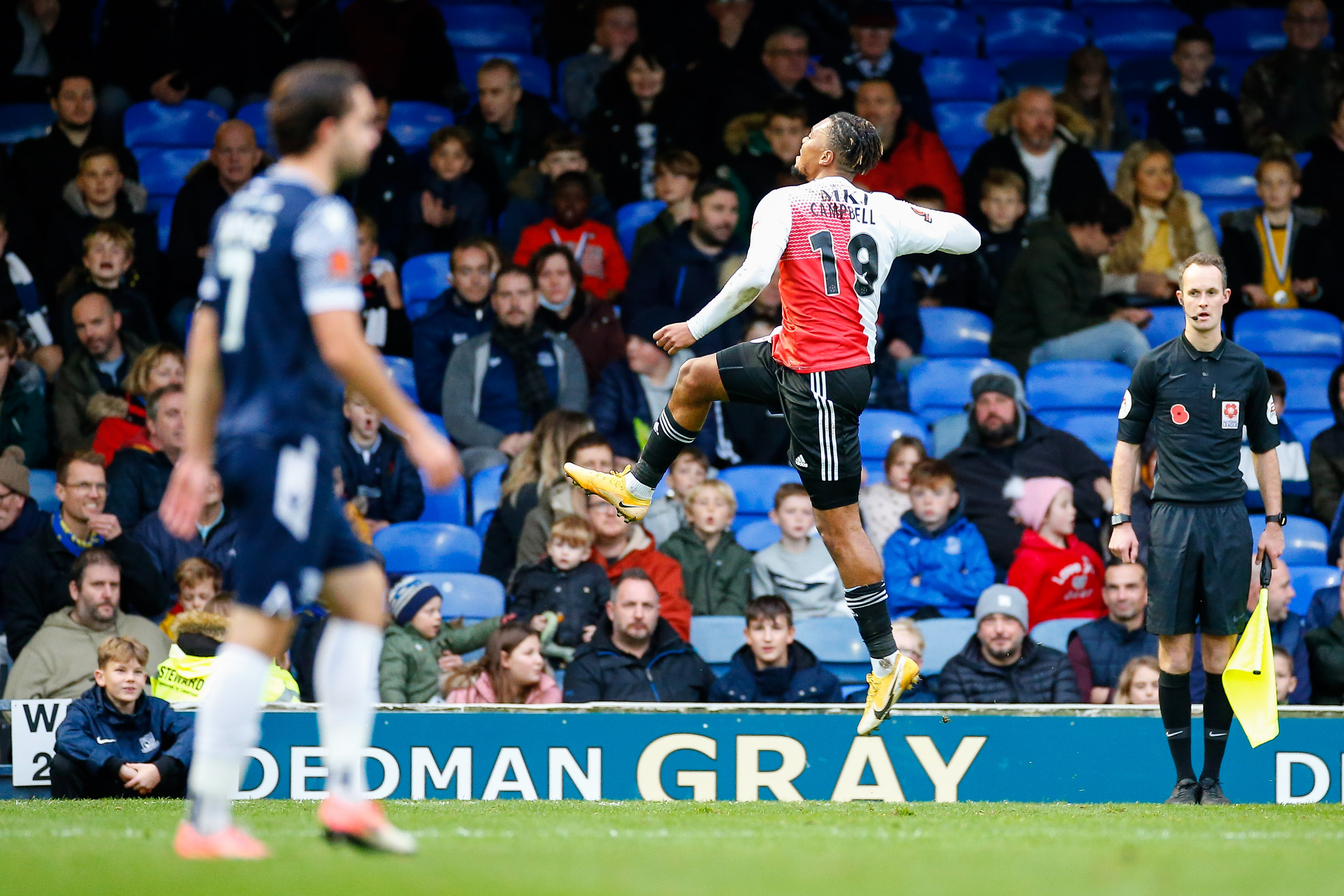 Play then reverted back to that of the even affair with few chances that it started as. Late into the half though, Tyreke showed why he earned the starting place, as he made something from nothing, by cutting in from the left onto his right foot, drove it from 20 yards, but it kept rising and rattled the cross bar.

Once the 3 minutes of stoppage time (owing to Hobson’s injury), the whistle blew, prompting the home support to boo off the Shrimpers.

The second forty-five began with blows traded at either end, firstly the home side came out and threatened with scramble in the box, one shot parried, the next looped up high, which deflected for corner, which didn’t beat first player. Soon after, yet another dangerous run down the left flank from Loza, allowed him to drift another cross in, leading to a corner that was met by the ever dangerous head of Diarra, sadly sailing over the bar.

The hour mark brought the Blues’ most gilt-edged chance, as following a free kick out on the left, a through ball found Rhys Murphy in space 6 yards out, yet he blazed it over the bar and almost the stand too. Minutes later, a reaction from The Cards led to a scramble this time in Southend’s area, drawing a save from Loza’s strike, leading to Ince’s swing and miss and finally a left footed shot from the left went wide from Campbell, not quite able to mirror the successful effort in the first half.

After slight tactical rejigs, the home side again came attacking Ross’s goal. A free kick for Southend on the left, taken by Zak Brunt, led to header downwards back across the goal by Dalby, but safely cleared away off the line. Then it was Brunt’s chance to convert, but he shot wide, after neat play between Dunne and Murphy on the edge of box; composure was lacking, as he swung at it, but it was high and wide of the left stick.

To counter the waves of Southend pressure, on came Effiong for the sedulous Loza, which led to the ball being held up well up top and also causing the home defence to be on the back foot and contend with some powerful runs. At the other end, Craig Ross was attempting to creatively allow the clock to tick by, but earned himself a booking in doing so.

Further threats in the Southend box from Woking came from the first half goal-scorer Campbell and Kretzschmar, as they took on the defence, but lacked the final clinical move to either convert the shot or put in one another when in space.

Another sojourn just inside the area led to Kretzschmar shooting with promise and the ball struck the arm of Southend’s arm. Penalty. Kretzschmar convincingly slotted it in nicely into the top left corner and rightly runs off to celebrate in front of the buoyant travelling support.

The closing moments brought another powerful run into the box by Effiong, seeing off two defenders, and crossing at pace, met by a leaping Kretzschmar, hungry for a brace, but ultimately gathered by Arnold. The final whistle brought joy to the 300-strong away fans but further boos from the suffering Blues fans.

This away win will not only be a spur for the team to get back to winning ways, but also be pleasing to be able to have adjusted the setup and win well in a different manner. This sets the Cards up now for a run of three matches against opponents below them in the league, which should certainly boost belief yet further.

Man of the Match: Tahvon Campbell – Not only for opening the scoring so well, but for providing a continuous and pacey threat that always felt too much for the opposition.
Tags
Share Facebook Twitter Print

Moor pain for the Cards as Solihull stroll to victory