After a disappointing capitulation to Eastleigh on 25th September, you could have forgiven Cards fans for a smidgen of pessimism. As assistant manager Ian Dyer called for his side to “look within themselves”, they faced a daunting run: 2nd (unbeaten) at home, 6th away, 1st away, and 3rd (unbeaten) at home. How many points could they realistically expect?

Surprisingly, they weren’t far from taking twelve. In what was a superb battling performance from both sides, Woking looked a side that had won three on the spin vying for the result against a title favourite that at times played exceptional football.

While the home supporters will be disappointed with the result, sunk at the death by a late torpedo courtesy of Harry Clifton, the fact that Woking fans can now feel genuinely aggrieved to have lost against one of the best sides in the league is indicative of how far the Cards have come over the summer.

The Cards made just the one change from the side that held out so resolutely against Dagenham on Tuesday night. With Max Kretzschmar picking up a hamstring strain in that game, a first Woking start was handed to Tarryn Allarakhia, a summer recruit from Crawley.

On behalf of the visitors, special mention should go to James McKeown, who made his 500th start in a Grimsby shirt on the day. Such records are almost unique in modern football.

With such an impressive crowd watching on, the game started at blistering pace. Visiting forward John McAtee should have hit the target within a minute from a long ball forward, while both Luke Waterfall and Clifton also failed to work Craig Ross from promising positions.

In red and white, meanwhile, Moussa Diarra should have nodded the Cards ahead within five minutes, almost seeming surprised to meet the ball from a far-post corner at close range. Indeed, Woking have come in for what some would term backhanded compliments about their effectiveness from set pieces and an apparent penchant for direct play in recent weeks, but that wasn’t the case this afternoon.

Playing most of their first twenty minutes entirely on the deck and with real intent, the closest the Cards would come to breaking the deadlock all day was one of the best moves of the season. Solomon Nwabuokei stepped through one, two, three challenges in central midfield before firing the ball into the forward line. A one-two between Tahvon Campbell and Inih Effiong would put the latter through, rounding visiting keeper James McKeown only to be denied by the sliding Waterfall on the Mariners’ goal line.

Grimsby would shortly go close too, with Ryan Taylor’s cross from the Woking left missing McAtee by inches in front of the KRE, after which both sides would get into something of a sparring match. That attack was indicative of Grimsby’s first half strength, only regularly finding any space down the Woking left with the busy Erico Sousa regularly on the ball - but they struggled to pick out the right ball to threaten the Woking goal.

By contrast, the screening midfield of Nwabuokei and Rohan Ince neutered everything that the visitors tried through the middle, while the excellent Kyron Lofthouse denied them much joy on the right. However, the incisive, rapid-fire passing that had characterised the opening stages now seemed a little rushed, and the Cards created little of real note after the first half-hour.

The last five minutes summed up that sparring, with a Sousa cutback denied by Nwabuokei, and two Woking free kicks failing to trouble the Town back line. 0-0 was a fair score at the break, even if the absence of a single goal was somewhat bemusing.

While remaining close and hard-fought, the second half saw something of a paradigm shift. Grimsby seemed happier to push higher up the pitch and retain possession for longer, while the Cards dropped deeper to accommodate them and focused more on playing their forward line into the extra space. A booking for Ryan Sears, dragging down Allarakhia after he bustled past two earlier challenges, was indicative of the Woking method.

After another period of both sides feeling each other out, the chances started to come. Ben Fox’s fizzing effort from the edge of the box, well-saved by Ross, was the spark; within two minutes, Josh Casey had nutmegged his marker to win a corner that Moussa Diarra could only nod into the arms of McKeown. Five minutes later, Clifton would drag an effort from the edge of the area wide of goal.

With little falling for either side from set pieces, open play remained the most likely means of opening the scoring. Campbell – voted Woking’s player of the month by over three quarters of the vote today – would fire wide across McKeown after good combination play with Effiong. Entering the final ten, Effiong would bustle through the Mariners’ press himself, only to also flash his shot wide from the left channel. 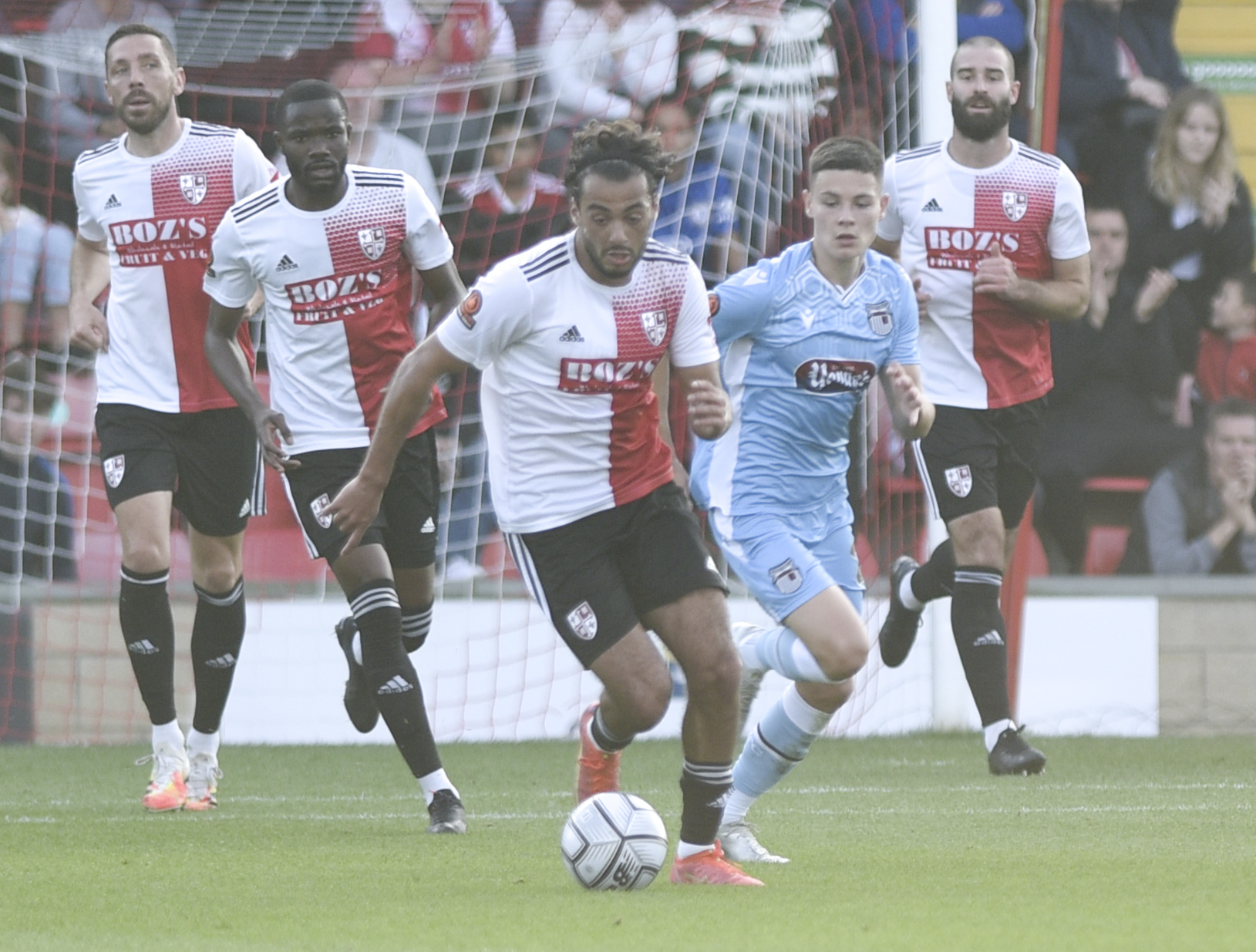 Campbell on the ball
David Holmes

Changes hadn’t seemed to change the state of play for either side. With Birmingham City loanee Thompson-Sommers replacing Allarakhia for the home side, and the dangerous Taylor substituted for Lenell John-Lewis, both sides were still blow for blow. But that would change within five minutes of Grimsby’s second substitute, with Sheffield Wednesday loanee Alex Hunt pulled for Max Wright.

Moments later, he found the winner. With Woking almost entirely camped in their own box, it was Wright who found himself on the Cards’ left, controlling a whipped pass from full-back Adam Crookes. Turning on the ball, he rolled it to Clifton bang in the centre of the D, who lashed a side-footed finish under Ross and into the bottom corner, to the explosive joy of the 869 travelling fans.

Alan Dowson would immediately roll the dice, removing Ince from central midfield to add another forward in Jamar Loza – his first appearance of the season, having worked over the summer to get past an injury – but in truth the Cards created little of further note. The introduction of experienced centre-half Sean Pearson helped to sure up the Mariners’ back line, while Woking’s set-piece delivery failed to find that moment of quality.

Whilst disheartened by the nature of a game that was on a knife-edge for long periods, the absence of league football next week gives the Cards space to reflect. To end their run of ‘top six’ sides with nine points from twelve is indicative of an immense step forward from last season, as was the quality of performance against one of the title favourites.

Man of the Match: Solomon Nwabuokei. The box-to-box midfielder put in an all-action display in the heart of the Woking midfield, covering an immense amount of ground to both protect the backline and spark attacks of his own.