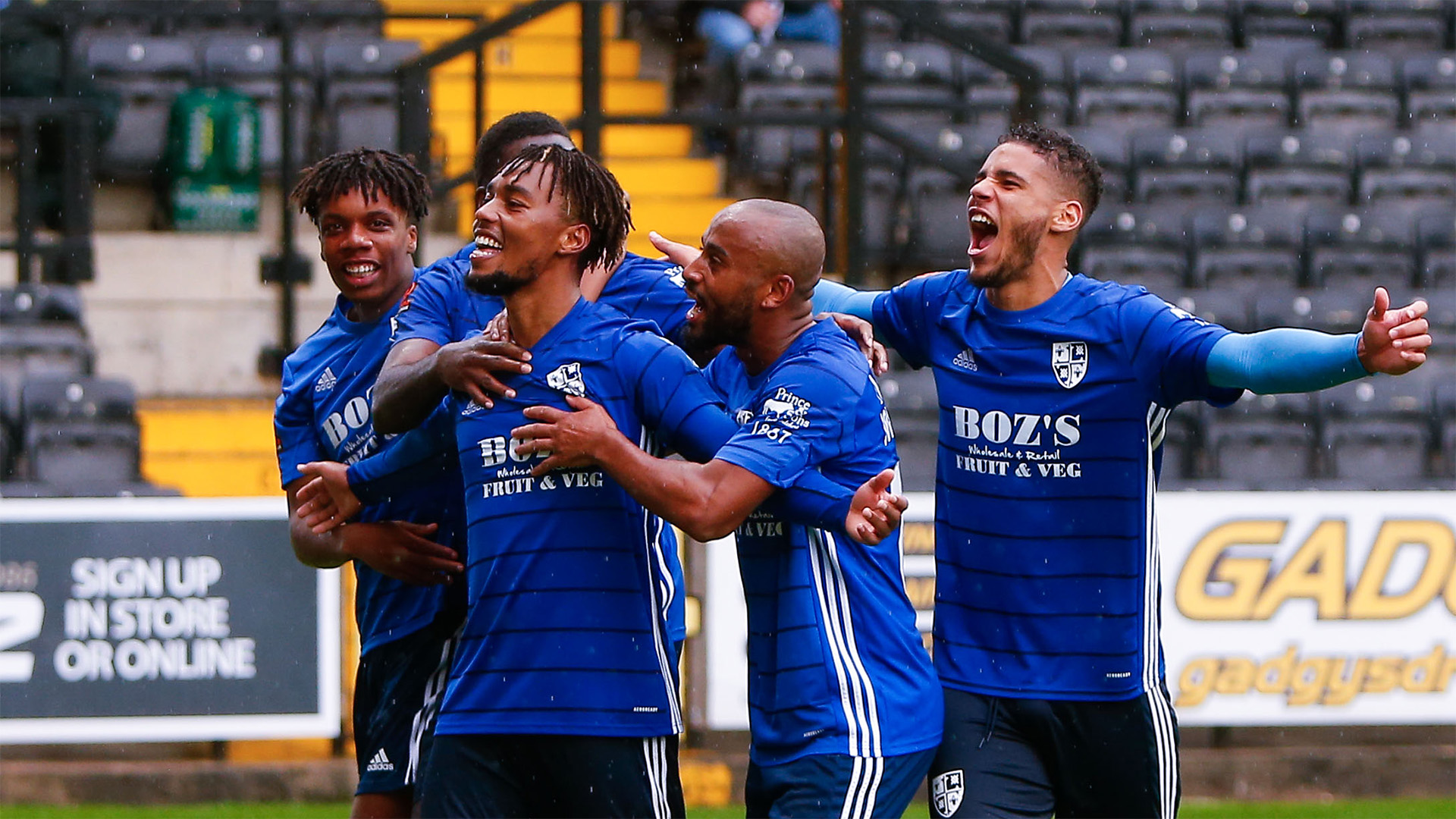 No team had ever hit four goals past Notts County at Meadow Lane since they were relegated in 2019. That record looked certain to be extended as the game approached the 70-minute mark with a 1-0 lead to the Magpies. However, what was to follow would go down as a huge statement to the rest of the league.

The Cards travelled to Meadow Lane with hope after a second half demolition of Chesterfield on Tuesday night. Manager Alan Dowson was forced to make one change from that game, with George Oakley out injured. Inih Effiong came into the team following his late goal off the bench.

Notts County, in front of a crowd of almost 6,000, aimed to impose themselves on the game early. Summer signing Aaron Nemane was proving a handful for Josh Casey, getting plenty of joy down the wing. Notts, under the guidance of Ian Burchnall, former understudy to Graham Potter, were dominating possession and trying to create.

But it was Woking who had the first half chance. A quick throw in from Kyran Lofthouse found in form forward Tahvon Campbell who teed up Effiong. He found time to take a shot, but it was well blocked by Richard Brindley.

Notts should have taken the lead, after a corner from Matty Palmer was headed across goal by Kairo Mitchell, and had Ruben Rodrigues got anything on the ball, it would’ve been 1-0 to Notts. However, Notts made their dominance count, twenty nine minutes on the clock and Ruben Rodrigues received the ball in space inside the box, producing a smart finish into the bottom corner.

The hosts continued to press, several openings coming to nothing, the best of which saw pinball in the box, Woking failing to clear their lines as Rodrigues, Brindley and Mitchell all came close.

Woking’s first significant attack since that Effiong chance saw another controversial decision. A corner found Rohan Ince, and he was sure the ball had crossed the line before Notts’ keeper Anthony Patterson could claw it away. The referee and linesman were not so sure, and gave a free kick to Notts for a foul instead.

Half time came and Woking were perhaps fortunate to only be one goal down. Despite the dubious ‘goal’, the Cards lacked possession and clear chances.

Notts aimed to pick up where they left off, the speedy Nemane tearing down the wing and winning a corner seconds after the restart. Woking were coming into the game, with Effiong trying to threaten, albeit to no avail.

Kairo Mitchell whipped in a dangerous cross on the hour mark, but there was no one in a black and white shirt to tap in. Tyreke Johnson was brought on with sixty four minutes on the clock, and the impact was almost instant. He took on his man several times, winning throw ins and pushing Woking up the pitch.

Johnson whipped in a dangerous cross, Notts failed to clear and Solomon Nwabuokei managed to feed Inih Effiong. Woking’s number nine made it two in two games with a clinical finish off the post. 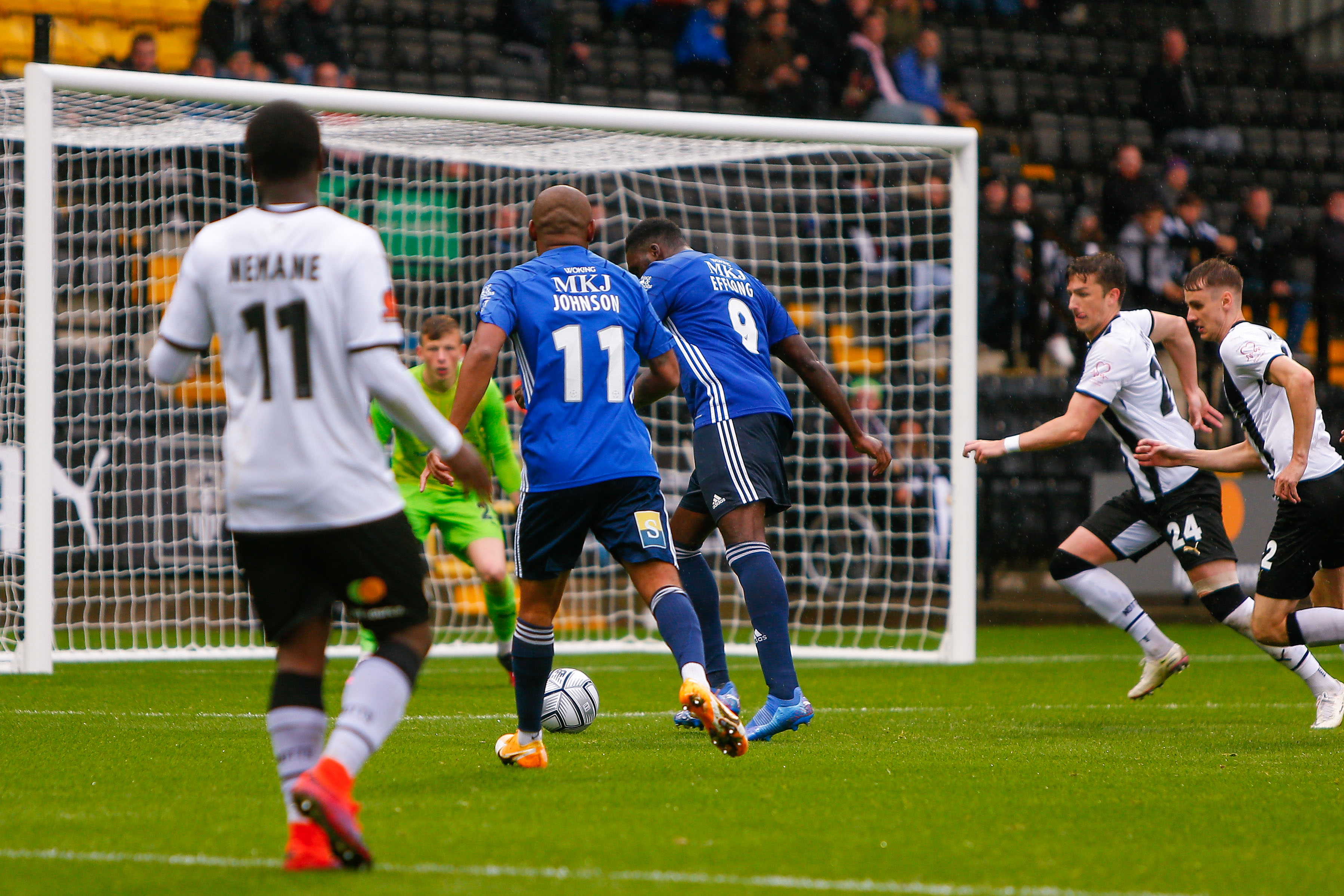 Five minutes later, Woking won a corner, and it was two. Kretzschmar’s dangerous ball was met by the towering head of Moussa Diarra, and the ball took a slight deflection before finding the net.

Another 3 minutes on and it was ‘game over’. Tahvon Campbell continued his scoring streak, picking up the loose ball after Notts yet again failed to clear, and slotting into the corner of the net. In just eight minutes, Woking had silenced the home fans and caused bedlam in the away end.

Max Kretzschmar almost made it four with a free kick attempt that just whistled past the post. Woking managed to kill the game off with a number of fouls. There was just one last save for Craig Ross to pull off, Matty Palmer’s speculative effort saved brilliantly by the Woking stopper.

The following corner was cleared away, before Tahvon Campbell sealed the deal. He left the keeper on the floor before tapping into an empty net and running over to a jubilant away end.

An incredible week for Dowse’s men, scoring seven goals past two of the league’s tightest defences, and in Tahvon Campbell they have a man on fire. The sky is the limit for Dowse’s new look Cards.

Man of the Match: Tahvon Campbell made it eight goals in seven games with another double, a clinical performance
Tags Match Report
Share Facebook Twitter Print