There was a sense of excitement and expectation as a superb crowd of over 3,000 gathered for the Cards’ first home game of the season. They were treated to an entertaining contest, but they did not see Woking repeat their opening day victory at Wealdstone. The Cards were undone by a combination of clinical finishing and steadfast defending from the Shaymen, whilst Woking themselves perhaps lacked penetration and were over-reliant on trying to make their aerial prowess pay from set pieces.

The Cards were without Inih Effiong, presumably injured, but suffered a further blow to their attacking threat when Max Kretzschmar pulled out at the last minute. He was replaced by Tom Champion, who provided excellent cover for the back four, but it meant that the hard-working George Oakley, in for Effiong, arguably lacked sufficient support.

On a magnificent pitch, the Cards started brightly, with Tahvon Campbell looking dangerous on the left flank, combining well with the impressive Rohan Ince and Josh Casey. Campbell put in great cross for Oakley, which was followed by a downward header from Ince, which was cleared off the line. The same players were involved again when, following a fine move, Campbell shot wide. Joe McNerney then got in on the act, his looping header tipped over the bar by the Halifax keeper, Sam Johnson.

Having weathered the early Woking pressure, the visitors issued a warning around the quarter of an hour mark. Having nearly created an opening with some good possession in and around the box, their frontman, Jordan Slew, won out in a battle with Craig Ross for a long ball forward, only to skew his shot wide from a difficult angle.

Woking responded well with a lovely ‘front to back’ move down the left flank again. But the complexion of the game changed dramatically in the 24th minute when defender Jesse Debrah struck an unstoppable drive from outside the area past Ross and into the far corner. It was a great strike but arguably Woking ought to have done more to close him down.

Fortunately for the Cards, they were gifted an equaliser fairly quickly. The visitors’ captain, Niall Maher, inexplicably passed straight to Ince, who then went to the ground in the area with two defenders paying close attention to him. The referee hesitated before awarding a penalty – much to the fury of the Halifax contingent. Jordan Maguire-Drew shot emphatically into the roof of the net to make it 1-1.

Woking proved their own worst enemies, conceding again just before the break. They failed to cut out a pass into the box and, while Ross parried the resulting shot, Martin Woods was on hand to ram the ball home to make it 2-1 to the away side.

Worse was to follow immediately after the break. A superb cross field pass out of defence left Woking exposed on the right side of the defence. The ball was slipped into the path of the lively Billy Waters, who shot across Ross and into the far corner for another excellent finish.

It could have been 4-1 a few minutes later as a corner was headed onto Woking’s bar, Ross saved the follow-up effort and then a further strike went narrowly wide.

The Cards’ sense of urgency was palpable as they sought desperately to find a way back into the game, whilst the Shaymen, not surprisingly, were content to break up play, resulting in a fairly ‘bitty’ game at times. Crosses rained in as Woking won numerous corners and free-kicks but, in spite of the threat posed by McNerney, Moussa Diarra et al, the Halifax keeper was not really troubled, as his defenders either cleared the ball or did enough to prevent a telling header.

But, in the 68th minute, just after Kane Thompson-Sommers had replaced Champion, Woking finally made a breakthrough. The ball was nodded down to Oakley in the box and he deftly steered the ball past the keeper to make the scoreline 2-3. 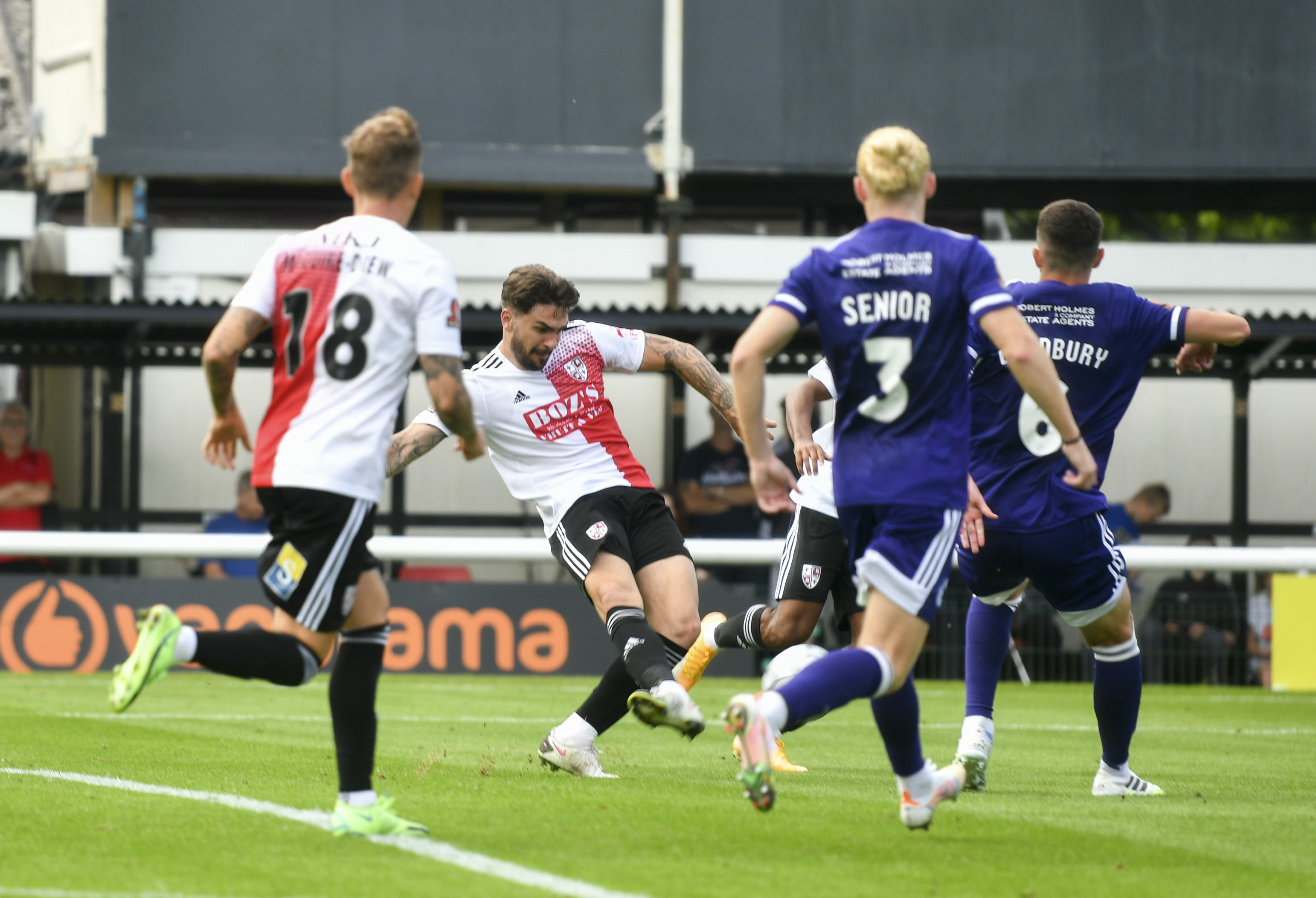 The Woking crowd roared on the side, and Tyreke Johnson’s arrival, in place of Campbell, certainly provided fresh impetus, but the closest Woking came to creating an equaliser were a fine effort from Thompson-Sommers, tipped over the bar, and a shot from Maguire-Drew, which, though well-directed, was comfortably saved by the Shaymen’s keeper.

On the balance of play – and certainly in terms of possession and corners won – the Cards were perhaps a bit unlucky not to gain a point. But Halifax earned their win with some sharp finishing and stout defending against a Woking side which was perhaps a bit too focused on pumping in crosses.

Although Cards fans will be disappointed not to start with a win at home, there were plenty of encouraging signs in, for example, the wing play of Campbell and Johnson and the influence of Ince and Champion in midfield.

You can check out Seymours here

See how Jon Woozley Mortgage advice could help you here