Beavers and Cards - with reduced squad - draw in entertaining friendly

A lot has changed since Woking and Hampton met in the build-up to last season. Only five of Woking’s squad in the August sun were involved in that colder, quieter tie behind closed doors, with Woking’s transition to full time and a frankly brutal second half to the season begetting a near-total changing of the guard.

A sizeable minority of the new guard, however, were unavailable, and so the Cards named a mixed line-up that included two trialists from the previous match against Farnborough. Notable was the three-at-the-back system: Alan Dowson has sung the praises of his centre-halves as some of the best performers during pre-season, and a switch to a back three gave the opportunity for each of them to get game time.

Unfortunately for Tom Champion, that time would only be about six minutes. An early clash between the head of Champion and the studs of Rohan Ince would necessitate an early substitute and a change of system. The introduction of Trialist #1 meant a switch from five at the back to a 4231 system, with the new introduction playing on the left wing opposite to Tahvon Campbell, and Trialist #2 in behind Inih Effiong leading the line.

A shift to a theoretically more offensive system didn’t lead force much action in the opening stages. Both sides needed set pieces to threaten in the opening twenty minutes, with Campbell miscuing a volley from close range, while a quick throw-in from the Hampton right led to a cross that Ruaridh Donaldson should’ve done more with.

Chances would soon begin to flow freely for the visitors, though. Hampton’s game plan seemed to bypass the midfield area dominated by Ince and Max Kretzschmar, attempting to play in wingers that struggled to get the best of Josh Casey and Tommy Block. Several long balls led to throw-ins and an opportunity for Woking to recycle the ball, while more central efforts were properly marshalled by McNerney and Diarra.

Woking’s better moments, by contrast, came from short, high-tempo passing through the central areas. Effiong, Kretzschmar and Trialist #1 all had promising efforts – with the former perhaps disappointed to fire his low effort straight at home keeper Alan Julian. The Hampton defence deserves credit for its willingness to block shots from dangerous positions.

Despite their efforts, as the half wound down, Woking’s approach paid off. Two minutes after Campbell was denied a one-on-one opportunity through a great last-ditch block, the Cards would convert their best chance of the half. Winning the ball high in midfield, Trialist #2 was able to time a ball to Kretzschmar that saw the midfielder drive into the Hampton penalty area, slotting a weak-footed effort under the onrushing Julian and into the bottom corner. 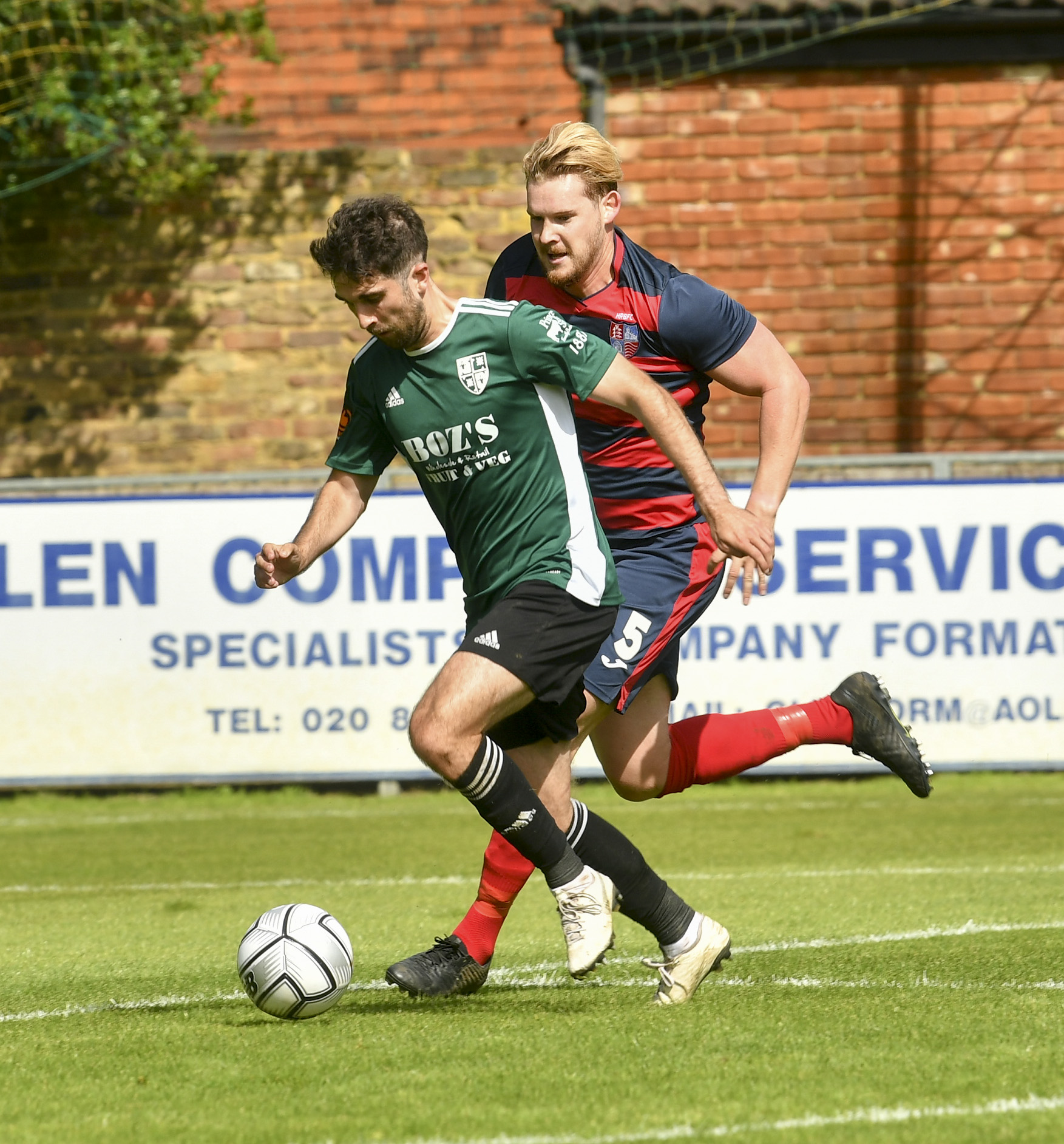 With little more to offer from either side before half time, the visitors were by far the more pleased of the two. Despite the formation and personnel setback, the Cards had asserted their superiority on the game as the half went on, and perhaps should’ve been disappointed to only be one up.

That rosy complexion briefly seemed to carry into the second half. Within two minutes the two Trialists were combining, with #1 setting up #2 inside the penalty area for a low shot tipped away by Julian. From the resulting corner Campbell rose highest, but couldn’t get a clean connection on the cross.

From that point on, though, momentum began to shift. Indeed, the Beavers were extremely unlucky not to equalise from their next attack. After good work down the left-hand side, a deflected thunderbolt from Tyrell Miller-Rodney had Smith wrong-footed from close range, only for the goalkeeper to pull out what is undoubtedly the best stop of his Cards career with a Hulk-strength right hand. Not many saves warrant a fist bump from the striker you stopped!

Two minutes later Smith was called into action again, with a miscue in midfield allowing Ryan Gondoh a strike from close range that the keeper saved well with his feet. Trialist #2 would respond with a fizzed effort just wide from a mirror position shortly afterwards, but the dominance the Cards had enjoyed in the first half seemed a long time ago.

Changes didn’t help that, with Woking shuffling the pack without necessarily having the right pieces for their puzzle. The introduction of Oakley and Hamblin would see Josh Casey shift to right back and shunt Inih Effiong out wide, with necessary changes perhaps disrupting the team in similar ways to the Cards’ loss at Farnborough.

Ten minutes later, that would tell. Another spill in midfield would give Hampton opportunity to drive at the Woking defence, and with Jorome Slew on the ball, there tends to only be one intention. The former Wealdstone man showed a flash of the form that earned him his transfer from Maldon and Tiptree last season, fizzing an unstoppable shot into Craig Ross’s bottom corner.

Despite unusual elements of their shape, the goal seemed to wake Woking up, and the last fifteen minutes were a thoroughly enjoyable sparring match. The Cards’ best chance of the half would come within a few minutes, with Trialist #2 setting up Trialist #1 in the penalty area from a nice central break: the latter should have done more to test Julian, who was able to tip the ball wide. Joe McNerney nearly saw a deflected shot loop over the Hampton stopper, while a corner routine to the edge of the area set up a Kretzschmar effort that ultimately came to nothing.

In the closing stages, however, Hampton will feel they could’ve sewn the game up. Ex-Card Kadell Daniel nearly made himself the hero of the day from all of thirty yards, smashing a goal-bound effort towards the top corner that brought the best out of Ross. The keeper was just as important from the resulting corner. The cross wasn’t dealt with and dropped to another ex-Card, Niko Muir, at the back post – but his effort didn’t have the power to beat Woking’s Player of the Season, scrambled to safety instead.

Full time would shortly follow. Given the limited personnel available, the need to continue to provide minutes and the reasonably impressive performances of both trialists, there are positives for the Cards here. At the same time, the visitors will be keen to ensure that upcoming performances reflect the better qualities of the ties against West Brom, AFC Wimbledon and Chelsea U23.

Man of the Match: Trialist #2. The creative midfielder was brave and composed in possession, creating several opportunities to shoot both for himself and others from dangerous positions, while demonstrably happy to dovetail with wingers on either side of him. After a goal on Tuesday, his performances will have given Dowson and Co. something to consider in the run up to the new season.
Tags Match Report
Share Facebook Twitter Print