Cards Denied Draw by Deflection at the Death

The Cards made the short trip across the border into Hampshire on a balmy Summer evening to take on Farnborough in their latest pre-season friendly match. A much-changed Woking line-up from Saturday’s second-half comeback against Chelsea U23’s played in their smart green and white away strip in front of a vocal home crowd who roared their approval at the final whistle.
The pitch looked in excellent condition, despite having been borrowed by Sutton United for their pre-season games, and this allowed for quick passing and movement throughout the game.

The hosts were liveliest in the early stages of the game which failed to produce any clear-cut chances. On ten minutes the visitors produced the first meaningful attack with Oakley feeding one Trialist who passed to another but saw his shot blocked well by the Farnborough goalkeeper.

It was then Farnborough’s turn to test the goalkeeper, when a left foot shot by former Card Reggie Young from the edge of the area was well held by Mark Smith at his feet, who cleared the ball up the field for Leo Hamblin to find George Oakley who spurned the chance by firing over the bar from close range.

The Cards then conceded an unusual indirect freekick in the box for a back pass but this came to nought. Shortly afterwards a mazy run by Fernandes, leaving several Woking players in his wake, was ended by a timely block after he had waltzed his way into the penalty area.

The same player was proving to be a thorn in the visitor’s side when his shot was well saved at the near post by Smith, with the follow-up being blocked and cleared to safety. The Cards then started to up the ante as half time approached and home skipper Jordan Rose was fortunate to escape a caution for a late challenge on a Woking Trialist, which the man in the middle let pass with just a strong word.

Woking opened the scoring with the last action of the first half on 45 minutes. A trialist turned inside on the left before cutting the ball back to another trialist whose shot was parried only as far as the third trialist who tapped the ball home through the legs of a Farnborough defender. There was no time left to kick off as referee Parsons blew his whistle to bring the half to an end. 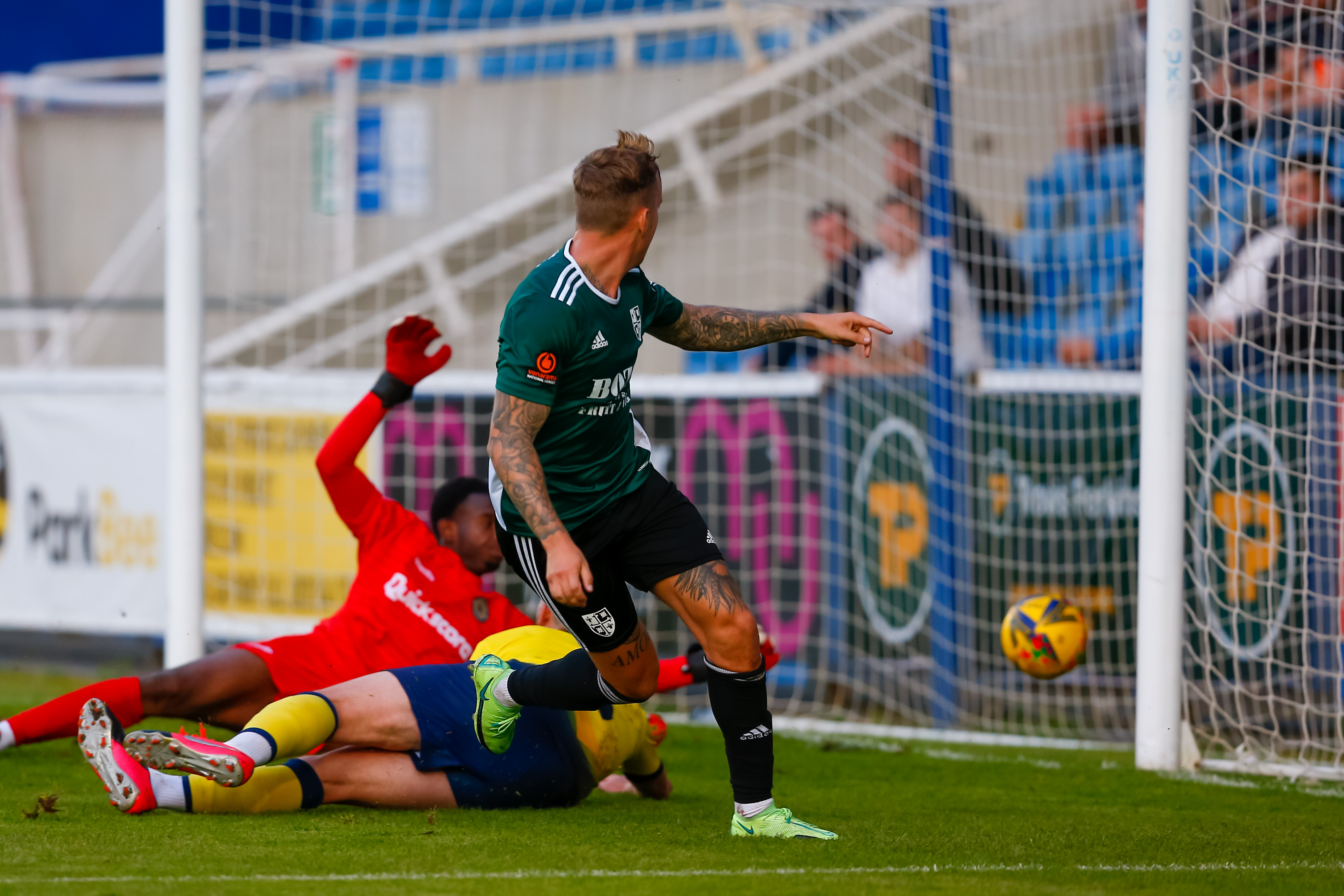 A trialist opens the scoring for Woking
Phil Fiddes

The home side were clearly aggrieved to be behind and came out in the second half with renewed purpose. Their efforts were rewarded with an equaliser on 51 minutes. Cooksley's cross was only pushed away by Smith as far as Young who struck the ball cleanly first time into the bottom right corner with his left foot to restore parity and remind the visitors that they meant business.

Five minutes later the Cards almost restored their lead when a header from a Trialist cannoned off the underside of the bar with the home goalkeeper a mere spectator but alas the ball stayed out.

The Cards made five substitutions on 61 minutes with Craig Ross taking over from Smith in the Woking goal with Effiong, Campbell, Johnson, Skinner and Block all joining the action. They made two more changes on 67 minutes; Saied and Casey replacing a Trialist and Nwabuokei and then Farnborough also brought on two Trialists.

These reshuffles seemed to spur on Farnborough who attacked with aplomb and carved out several good chances and after 72 minutes the excellent Cooksley was replaced by Butler. Into the last 10 minutes and they almost scored twice from corners but failed to take their chances.

With the electronic scoreboard showing that the 90 minutes had elapsed, Farnborough won the match through Oyenuga. The full-back tried his luck from outside the box and the ball took a big deflection before spinning into the bottom left corner, giving Ross no chance.

The near 400-strong crowd were delighted to take the spoils from their neighbours and deny them a derby draw.

Dowse’s Cards were left to reflect on a disappointing result against opponents who played with purpose throughout and who eventually deserved their narrow last-minute victory. Next up for Woking is a trip to Hampton & Richmond on Saturday followed by a short trip to Woking Park to play Westfield on Monday evening to complete their pre-season games.

Man of the Match: A difficult choice with so many changes made but George Oakley played well before being substituted and the Trialist who scored also caught the eye with some neat touches.
Tags Match Report
Share Facebook Twitter Print