In most seasons, equalling the clubâ€™s longest run of defeats since man landed on the moon is an almost guaranteed sacking. The madness of trying to complete a sporting competition in the midst of a pandemic, with more than half of the first-team squad unavailable, has made it just another turn in a mad, mad season.

In this case, the ninth loss in a row was a positive performance, against one of the surprise packages of the season. The points take Sutton above Torquay and into first in the National League table, but they were hard earned, with the Cards mounting a first-half fightback and a late charge to threaten one of the best sides in the league at a ground where theyâ€™ve been almost invincible over the course of the season.

Wokingâ€™s line-up was almost unrecognisable to the team that last visited Gander Green Lane, with only seven of the sixteen that beat Sutton 1-0 in February able to make the trip. Eighteen-year-old Leo Hamblin made his fourth consecutive National League start, with fellow academy graduates Joe Leslie and Selim Saied, as well as loanee teenagers in Zach Robinson and John Freeman, in a threadbare squad.

The Sutton squad, meanwhile, retained its recognisable personnel in the well-drilled 4-4-2 that had taken the Uâ€™s to second place in the National League ahead of the game â€“ in fact, 8 starters on that cold February night also started this game. The only new acquisition to start was Donovan Wilson, on loan from Bath City following the curtailment of the National League South season, and in great scoring form with six in thirteen games.

As has been the custom in Wokingâ€™s recent run, the first major chance would see them fall behind, with the barrage of Chesterfield corners on Saturday not appearing to teach too many lessons. Sutton won the first two contacts, with first Omar Bugiel and then Louis John winning headers inside the Woking box. The ball dropped to Wilson, and the forward on loan from Bath was able to hold off Sam Ashford and slide a two-yard ball back to John. The centre-half poked home through four Woking shirts, wheeling away with his fingers in his ears â€“ an odd choice in an empty stadium.

Beyond that, the first twenty minutes didnâ€™t afford many chances for either side. The Cards showed a lot of industry in defence, often seeing off Sutton moves by sheer weight of numbers as much as anything else, without being able to pick an incisive pass or moment on the counter. A Jack Cook long throw almost offered Malachi Napa the chance to replicate his stunning bicycle winner from the previous meeting, only for the young winger to kick air; at the other end a Bugiel header from a Sutton corner, bulleted metres wide, was as good as the opening stages got.

Speaking of Bugiel, the Libyan was the man to literally hand the visitors a lifeline. Another long throw from Cook into the six-yard area wasnâ€™t dealt with, and with Gerring and teammate Craig Eastmond battling for the ball beside him, Bugiel missed his defensive header and simply punched the ball into the air. Charlie Cooperâ€™s penalty on Saturday bordered on comedy, and heâ€™d clearly spent the rest of the weekend practicing: his third goal in three games was lanced into the bottom corner, with Uâ€™s keeper Dean Bouzanis diving the wrong way. The Cards had been awarded two penalties in thirty-eight games before the start of April - now theyâ€™d scored two in a week. 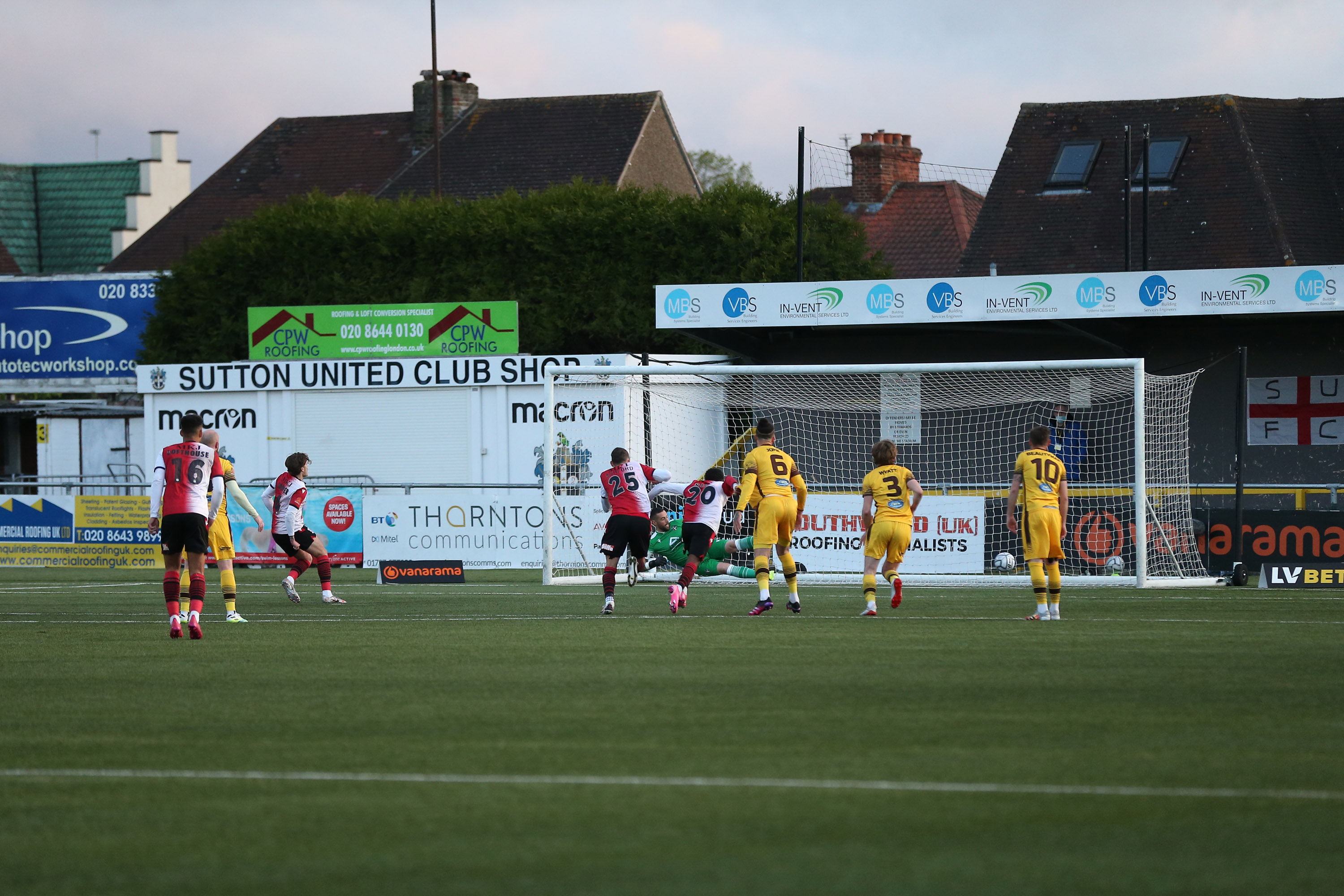 Woking took heart from the goal, with Uâ€™s keeper Bouzanis on his toes to steal wide crosses away from Ashford and Ben Gerring, but Sutton should have claimed the lead back within ten minutes. A quick throw-in from the Sutton right split the Woking defence, with Hamblin alone left to protect Ross from the advancing pair of Wilson and Harry Beautyman. The former squared to the latter, only for the midfielder to hammer the bouncing ball off the Woking crossbar with Ross at full stretch.

Teasing efforts from Bugiel and Beautyman would fail to create the shooting chances they deserved, and then suddenly it was half time. With the Cards conceding almost a third of their goals in the last fifteen minutes of games, it was by no means certain that the deadlock would last, but a just reward for a battling performance against one of the leagueâ€™s most in-form sides.

With that said, Sutton should have been ahead within seconds of the restart. Superb work from Wilson allowed the forward to bring the ball down in the right-hand channel, rolling Ben Gerring before laying the ball off to Bugiel on the edge of the box. The forward played Beautyman into space of his own on the left, with the midfielder dummying beautifully away from Lofthouse before hammering an effort into the onrushing Ross, with the goal gaping.

Unfortunately, it took less than five minutes to rectify that miss. One long ball into the midfield from Bugiel was flicked into open space in the centre of the Woking half, and the Cards met it with indecision; Gerring continued to mark his striker, while Kyron Lofthouse hesitated in pursuit of the ball before backing off. Wilson was the man to take advantage, rifling a superb left-footed strike through Gerringâ€™s legs and into the bottom corner from twenty yards.

Another five minutes, and it was three. The home sideâ€™s first dangerous free kick of the half, whipped in from Beautyman on the Sutton right, was headed out by Nathan Collier, but the Cards had so many players defending the six-yard box that there was nobody defending the edge. David Ajiboye was the man on the scene, and if Wilsonâ€™s goal was a good strike, this was a superb one, rocketing the bouncing ball into Rossâ€™s top corner.

Understandably, it took the wind of Wokingâ€™s sails. The home side were able to take control of possession and begin to throttle the few passing lanes that Woking had been able to rely on in the first half, denying crossing opportunities much more effectively. That, in turn, meant a quicker counterattack; Wilson couldâ€™ve had his second if his stabbed effort from an Ajiboye through-ball had a little less venom on it.

The visitors had had very little to shout about in front of goal in the second half, but the introduction of youngsters Joe Leslie and Selim Saied changed that. With three minutes to go and having not had a shot on target all half, the former made his mark, picked out on the left by Ashford before standing up fullback Jonathan Barden and whipping a low, swerving drive into the bottom corner from twenty yards. The grin as he backpedalled to the halfway line spoke a lot of what the game meant to the young Cards.

It couldâ€™ve been 3-3 but for the late bravery of Dean Bouzanis, screening a great late cross into the six-yard box with Craig Ross lurking on a rebound, but an equaliser was ultimately beyond the Cards. It is a performance that those still standing after such a gruelling run of games can take heart from, showing character in the face of adversity â€“ a quality that Alan Dowson has said is extremely important in picking players for next season.

That season canâ€™t come soon enough. Woking have played a midweek game in every week bar three since Boxing Day, and have finally caught up, with Saturday games making up the last three of the season. As the competition nears its end, and the days get warmer by the week, and restrictions hopefully continue to lift, the club is nearly able to wash its hands of one of the most uniquely challenging campaigns in non-league history.