It was always the intention, at the end of an impressive FA Trophy run, to protect the inimitable legacy of Geoff Chapple and ensure that Cards fans could sing â€œnever lost at Wembleyâ€� in full voice when fans return to the Laithwaite Community Stadium. It just wasnâ€™t supposed to be quite like this.

For all of the magic that Cards fans associate with the hallowed Wembley turf, this year will see a new FA Trophy champion crowned. A first-half goal from forward Joey Butlin would end a cup run in which the Cards have seen off four National League Premier competitors in gritty, character-driven performances, only to be bested by their National League North opposition in every department.

The result wasnâ€™t for a lack of offensive intent in the setup, with Woking opting for an attacking switch in the absence of suspended midfielder Ben Dempsey. On-loan Watford striker Sam Dalby led the line ahead of fellow loanee Sam Ashford, Max Kretzschmar and the near-miss Jamar Loza (pictured above), returning from injury after the Cardsâ€™ midweek win over Wealdstone.

For all of the attacking talent in the Woking line-up, the early stages were dominated by towering centre-half Moussa Diarra. The Frenchman produced Wokingâ€™s first attempt on goal with a looping header that had former Card Brandon Hall scrambling across his line, before a superb sliding tackle denied Kyle Finn a free run at the Woking goal.

Despite a subsequent interception to deny Butlin a tap-in from a Michael Bakare cross, Diarraâ€™s efforts were soon stained by an error that would lead to the match winner. A poor touch in an unusually high area of the pitch gifted the Bulls possession in midfield, with the home side working the ball left to Bakare. Lofthouse failed to block the cross, both centre-backs were left standing by the whipped ball, and the 5â€™9â€� Butlin was able to bullet a header past the exposed Craig Ross to open the scoring.

The goal seemed to fire some urgency into the visitors, who began to force chances that merited better finishes than they received. Superb collaboration between Ashford and Kretschmar on the edge of the box saw the former force a strong parry from Hall, only for the latter to blaze over the resulting corner from a routine described as â€œpitch perfect in trainingâ€� by media mogul David Holmes.

Itâ€™s also fair to say that the Cards saw more than one â€˜sliding doorsâ€™ moment in the first half that could have turned the tide of the game. From Kretzschmar pinging a through ball into the heels of an onrushing Sam Dalby, to Ashford getting the ball stuck under his feet inside the penalty area, to a Loza mistouch following a powerful run from Josh Casey on the left-hand side, Woking had several chances to level the score that went begging but for the mercy of a ball that wouldnâ€™t quite stick.

A deflected Bakare shot aside, the visitors felt in the ascendancy coming up to half time. With an early goal giving plenty of time for response, the Surrey natives watching on felt fairly optimistic; surely there was time for a real assault in the second half?

If an early barrage was expected, it was disappointing for Woking fans to see it come from the home side. Empowered by their first half efforts, the Bulls asserted their intent to double the deficit, with centre-half Jamie Grimes proving dangerous from set pieces. At the same time, Herefordâ€™s strategic intent was made manifest by a slightly unjust yellow for Hall after the fifth time-wasting set-piece in the first ten minutes. 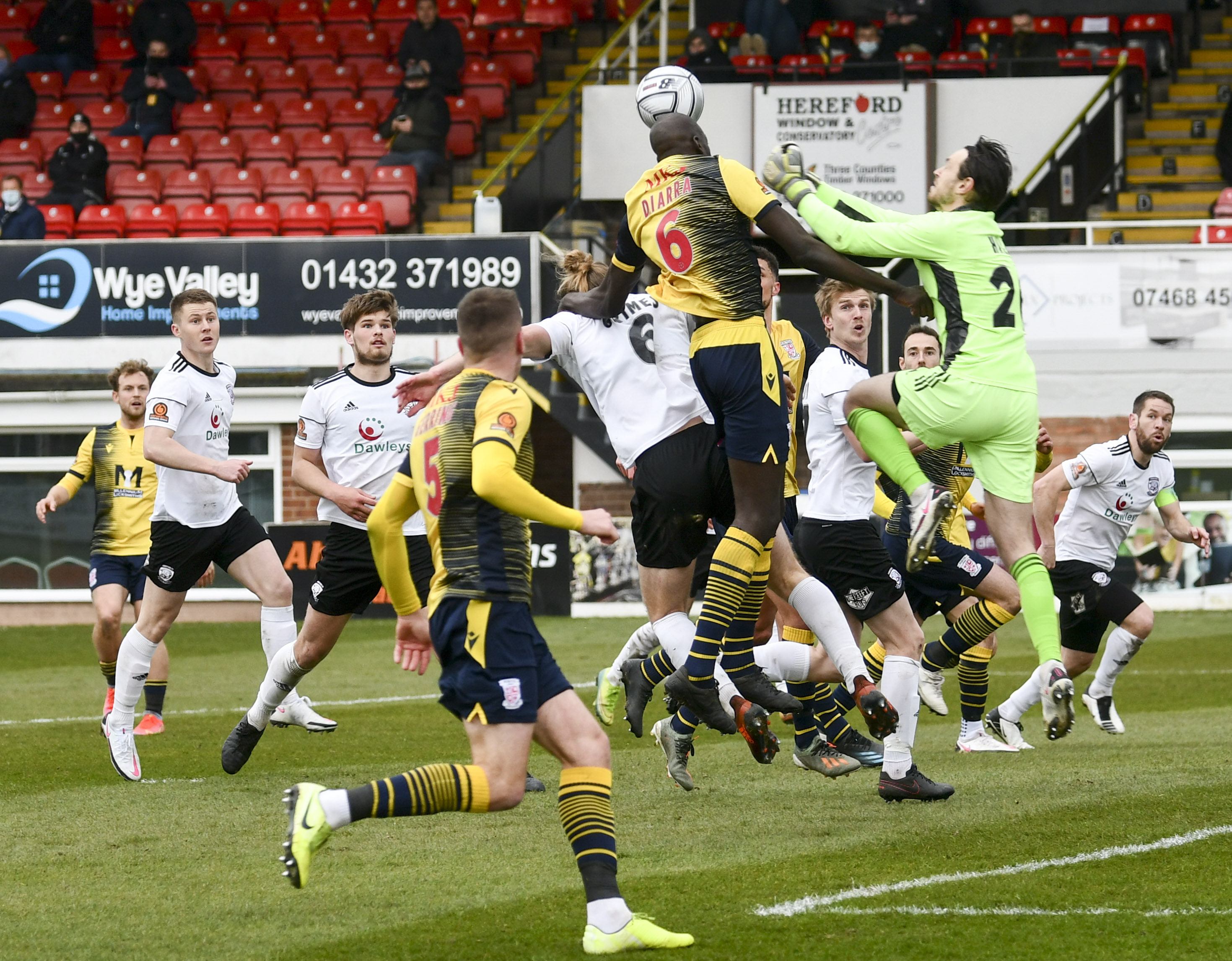 On the hour mark, after feeling their way into the second half, an uncomfortable hour for Woking was forgotten for a few seconds. A free kick in the middle of the Hereford half was driven into the box by Charlie Cooper, and a brave Diarra header â€“ despite a two-fisted punch to the face â€“ picked out Ashford to head into an unguarded net. With Diarra seeming offside on replays, but also taking a powerful blow to the face from a booked Hereford player, and Ashford briefly circling away only to pull up short, Woking fans can be forgiven for a conflicted few minutes.

The remaining half-hour, it has to be admitted, was anything but. While the visitors would have hoped for those in yellow to take heart from such a near miss, the next quarter-hour was dominated entirely by Hereford. A huge block from Diarra was all that denied the impressive Bakare from doubling the deficit, with Chris Camwell firing the rebound wide of the rooted Rossâ€™s post. Three minutes later, Ross did superbly to deny Owen-Evans from close range, relying on the goalkeeping gods to see Finnâ€™s follow-up fired over the bar.

For the final fifteen, changes were made in the hope of forcing a reaction. Ashford and the ineffective Loza made way for Jonte Smith and Malachi Napa, the latter of which was unable to shake a hamstring strain after a ten-minute spell of positivity and intent. Hampton loanee Niko Muir soon followed for Sam Dalby as the Cards looked to play increasingly direct; it wasnâ€™t long before both centre halves were bombing on beyond the subs in order to win long balls in dangerous areas, with both Gerring and Diarra winning flick-ons that ultimately failed to find their teammates.

Ultimately, the Cards would manage two attempts on goal in the last fifteen minutes; the first was blocked from the edge of the area, and the second found the foot of a 6â€™6 centre-back at full stretch with little hope of hitting the target. Hereford, for their part, would almost certainly have scored a second if Butlin hadnâ€™t been so surprised by an onside call that he took a touch akin to a shot at Ross.

In a season unlike any other, the final whistle was significant for a number of reasons. Primarily it represented the confirmation, at least in part, of the first FA Trophy final without a National League Premier candidate since Grays Athletic took on Hucknall Town in 2005.

It has also heralded the end of a Woking career for several as-yet unknown players that wonâ€™t be with the club next season. With manager Alan Dowson adamant that furlough will be needed to protect the finances of the club, and a transition to full-time football necessitating change in the squad, the loss blunts the competitive edge of a season that has already dispensed with the possibility of relegation.

What we know for certain is that, with no threat of relegation and short of a phenomenal playoff run, the Cards have reached the end of a competitive season. Dowsonâ€™s comments on â€œfurloughing the entire squadâ€� are not literal, but nor are they without truth; the remainder of the season will see emphasis placed upon the next, in which a substantial budget increase is indicative of the Wokingâ€™s intent to look beyond midtable.

Whether that ambition comes to fruition or not, in the immortal words of Bob Dylan, â€œtimes, they are a changinâ€™.â€� The launch of a five-year season ticket has heralded a new era for the Cards, at the end of a campaign unlike any other. We can only hope that the positives of this season are taken into the new.

Man of the Match: Sam Ashford. The only Woking player to fire a shot into the net, and the most dangerous of his teammates before injury forced an early departure.