The game was played at Victoria Park on a sunny, almost balmy spring-like afternoon. Hartlepool enjoyed the best of the first half action but Woking more than matched their opponents after the interval and were unlucky not to score. The gameâ€™s decisive moment came with ten minutes left to play as Oates struck the winner in off the far post to seal a single goal victory for the hosts.

Dowseâ€™s Cards showed three changes from the midweek draw with Altrincham. Mark Smith making his debut in goal and Malachi Napa (pictured) and Niko Muir replacing Charlie Cooper and Jamar Loza. The latter was originally amongst the substitutes but was injured in the warmup and replaced on the bench by Woking academy graduate Jack Skinner.

The first ten minutes produced very little in the way of chances for either side. Featherstone and White controlled midfield well, and the first touch for either goalkeeper was when Killip collected a cross from Sam Ashford.

The first real chance of the game came in the 14th minute. After slipping past Moussa Diarra, Oates cut the ball back to Molyneux who hit the top of the Woking crossbar with his effort.
This was a warning to the Cards that their hosts were keen to keep up their excellent home record. 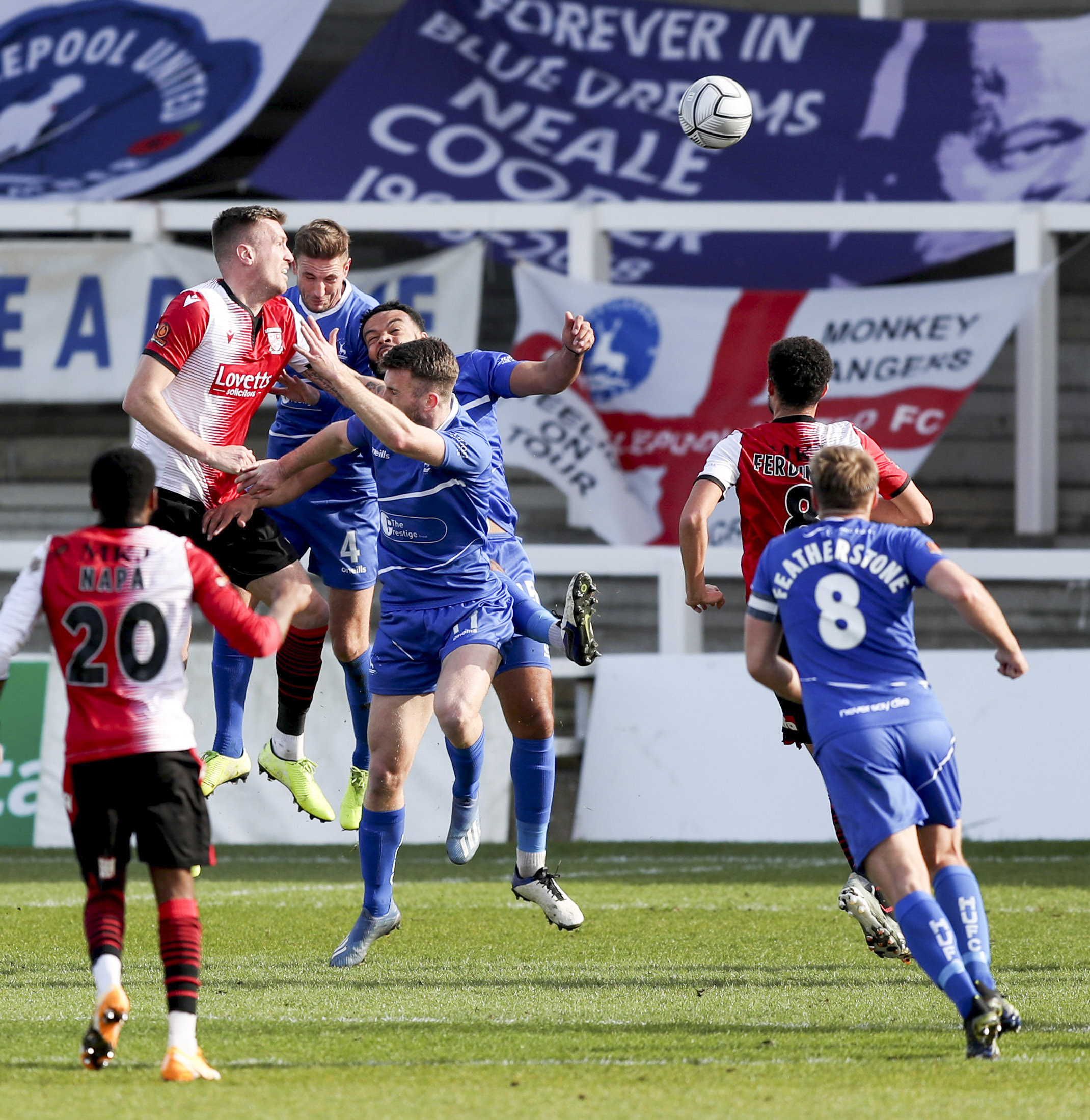 Two more opportunities followed with Williams dragging a close-range chance wide and Tom White firing over from 25 yards. It was then Wokingâ€™s chance to attack. A long ball through the middle found its way to Matt Jarvis; his hooked cross was headed over by former Poolsâ€™ striker Niko Muir.

Johnson found himself in the refereeâ€™s notebook on 37 minutes after he took exception to the assistantâ€™s decision to signal a free kick. It was the only card of the game by the man in the middle Paul Marsden, who let the game flow with a pleasing performance in an age where officials often take centre stage over the players.

A good three minutes before the interval by Ben Dempsey resulted in some ping-pong in the box with no positive outcome and shortly afterwards the half came to an end goalless with just one added minute.

The home side started the second half well and had a chance when experienced defender Liddle could only head straight at Mark Smith, although the assistant had raised his flag for offside.

Niko Muir was replaced just before the hour mark as Woking pressed forward. They were very nearly rewarded for their ambition when Matt Jarvis found some space and crossed for Sam Ashford. The forward forced an incredible fingertip save from Killip who palmed his point-blank effort away when he had seemed certain to score.

Shortly afterwards Sam Ashford pulled clear of his marker only to see his shot cannon back off the post with Killip well beaten. This was to prove pivotal in the final analysis as these chances need to be taken when they arise.

Josh Casey then had a long-range effort fly over the crossbar and a cross from Oates was claimed by Mark Smith, but much of the game at this point was lost in the middle of the park.

Hartlepool made a double substitution with 20 minutes left; Holohan and Shelton coming into midfield for White and Williams. Johnson had a half-chance after another corner from Ferguson (seven in total) but the Woking defence resisted stoutly.

It was the introduction of Shelton that led to the only goal after 80 minutes. Collecting the ball 30 yards out, the midfielder slid the ball through to Oates who hit his shot across Mark Smith and into the bottom corner of the net via the far post. It was a good finish from a striker in his second spell with the club.

Sam Ashford was replaced by Jayden Wareham with seven minutes to go and he had the visitorsâ€™ best chance to equalise in the final minute of the match when his goal-bound shot was blocked. Three added minutes produced little action as the hosts closed out the game to claim the points.

To be fair to Woking they never gave up but were ultimately undone by the one decisive moment that consigned them to defeat. The referee was one of the best seen this season and both sides contributed to an entertaining contest.

The Cards travel to newly promoted Wealdstone on Tuesday, the two clubsâ€™ first meeting since the infamous play-off semi-final of 2019, before heading West to Hereford next Saturday for the eagerly awaited FA Trophy semi-final with a place at Wembley the reward for the victors.

Man of the Match: A difficult choice but Sam Ashford was unlucky not to score and put in a good all-round performance for the Cards before going off injured