Cards come up short in Somerset

Coming into Saturdayâ€™s game, Woking would have been full of confidence on the back of two positive performances at home, in the 3-0 victory over Kingâ€™s Lynn and the dominant performance in midweek against Boreham Wood, which somehow remained goalless. However, they faced a Yeovil side on a run of 6 consecutive wins at Huish Park, despite losing their previous two matches.

Woking made no changes to the team that drew in midweek, but the front three failed to cause problems in the same way they have over the past week. Despite club captain Josh Caseyâ€™s pinpoint delivery and Max Kretzschmarâ€™s (pictured) well-timed header at the back post, the Cards were unable to snatch an unlikely point in blustery Somerset.

Woking started the most brightly, winning a succession of set pieces down the left hand side. In the 2nd minute, a recycled corner was looped back into the box towards Diarra, but the Yeovil keeper did just about enough to divert away from the Frenchman and gather on second attempt. Minutes later, another fantastic move was put together, with sharp play from loanee Ashford leading to a driving run from stand-in left back Lofthouse, who cut back onto his right foot from the edge of the box, but his shot was turned away by Adam Smith. A couple of corners and a long throw followed, but to no avail.

The referee made it clear from the get-go that he wasnâ€™t going to stand for any nonsense, giving a number of free kicks both ways in the middle of the park. Furthermore in the 18th minute, following a great piece of link up play, Jamar Loza was booked for an apparent attempt to deceive the referee into giving a penalty.

In the 22nd minute, Murphy looked certain to have outdone Diarra for pace, but the pair collided and the ball ran through to Craig Ross, with Diarra perhaps lucky to have not been penalised and presented a yellow card. More quick passing by the Gloversâ€™ front line led to a cross from ex-Woking forward Josh Neufville, but Ross was fast off his line to collect in front of the Yeovil strikers.

A plethora of half chances followed, with a Cooper free-kick from 30 yards failing to trouble the Yeovil goalkeeper, and likewise an effort from a similar distance from Knowles was comfortably gathered by Ross. Reuben Reid then found himself in a good position down the left hand side, but couldnâ€™t find a teammate in the middle, and up the other end great play between the new Woking loan signings Ashford and Muir forced Sass-Davies to slide the ball behind for a Woking corner. From this, came Wokingâ€™s best chance of the afternoon so far. In a routine straight off the training ground, Ashford rolled the ball to Cooper on the edge of the box, whose first effort was blocked, and his second fired just millimetres past the near post. He had really got a hold of it, and was incredibly unlucky not to have found the top corner.

Unfortunately, Woking soon found themselves behind. Familiar face Josh Neufville picked the ball up in the middle of the park, drove at the back four and flicked a pass through a disorganised Woking defence, where the ball was picked up by danger-man Rhys Murphy, who calmly opened up his body and curled it past Craig Ross into the top right hand corner, and Yeovil had the lead.

Finding themselves a goal behind, Woking might have hoped that the game would open up a bit more, but no clear-cut chances came for either side. A delightful clipped ball to Max Kretzschmar at the back post in the 36th was headed across goal to Ashford, but a poor touch meant he failed to swivel and direct an effort goalwards.

Yeovil were comfortable with the one goal cushion, and dominated the ball for long periods towards the end of the first half. A couple of fast counter-attacks threatened to cause problems for the Cardsâ€™ defence, but they did just enough to head one behind for a corner, and take the sting out of another effort from distance by Knowles, and so didnâ€™t really work the Woking keeper.

In a game of few chances, in the second half Woking would have hoped to produce more quality openings, which were to be needed if they were to get anything from this game.

The second half certainly didnâ€™t start in the way that Dowse would have hoped, something which was evident when Josh Casey came on off the bench to replace Jack Cook, with Lofthouse switching to his more favoured position at right back. In the 51st and 53rd minutes respectively, Max Hunt and Alex Bradley picked up yellow cards for the home side, but the Cards were unable to fashion an opening from either of the resulting set pieces. 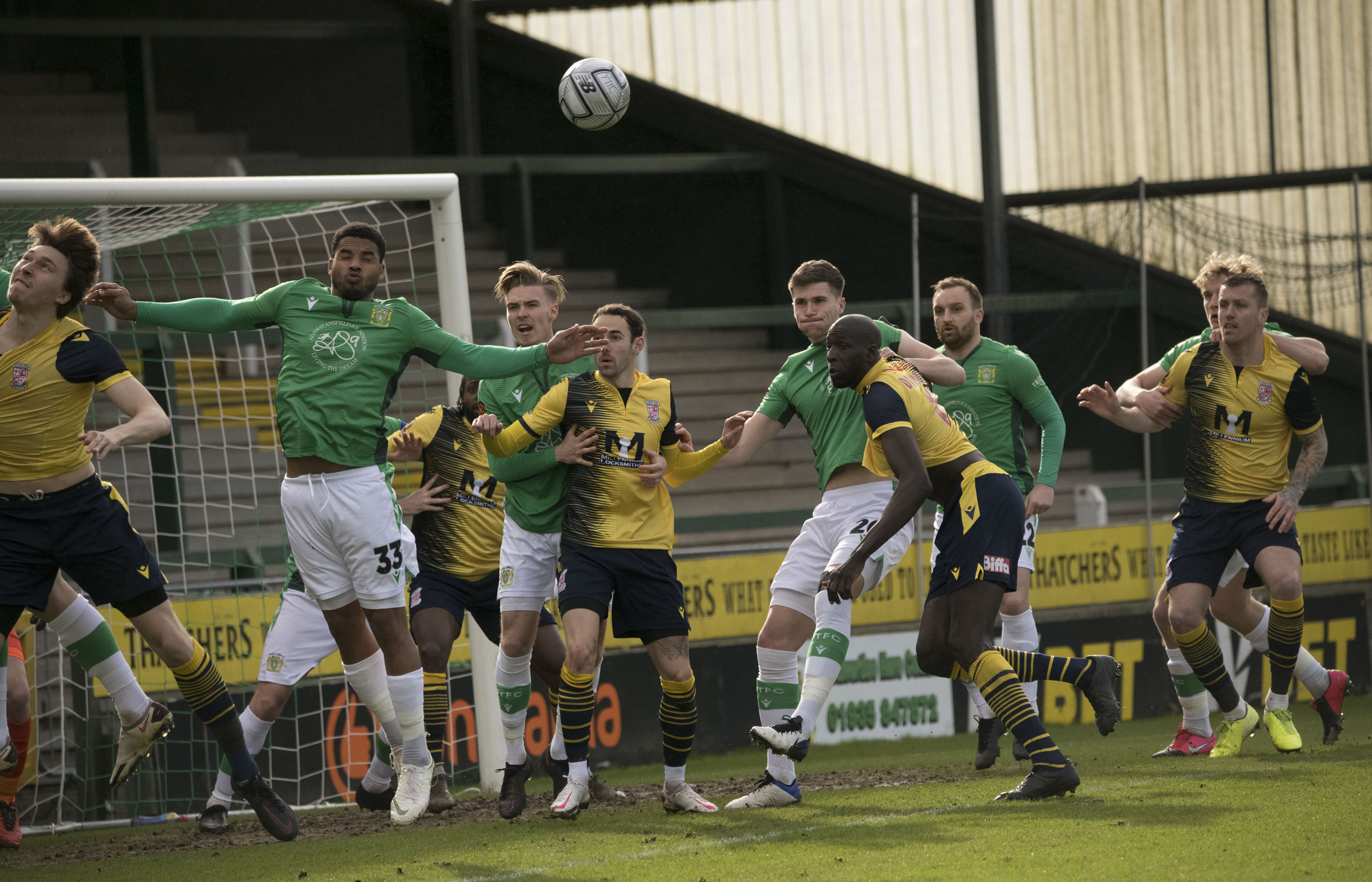 Action in the Yeovil goalmouth; pic by Len Copland Photography

The lack of flow in the game was characterised in the 56th minute, where Woking had four consecutive corners, but despite quality deliveries from Sam Ashford, the Yeovil defence was impressively equal to each one, considering the relative inexperience of their centre-backs; they are both 21 years of age.

Near the hour mark, after Lofthouse was unfortunate to be penalised and subsequently booked for a foul by the corner flag, Rhys Murphy struck again with a deftly flicked volley at the near post! As ever, conceding from a set piece is disappointing, and no one seemed to have picked up Murphy, but it was a wonderful piece of skill from the lethal frontman to double Yeovilâ€™s lead.

The second goal seemed to really kick Woking into gear, and Loza and Kretzschmar out on the flanks had started to cause some problems for the Yeovil full-backs, and only a desperate bit of defending prevented Loza an effort on target after he danced his way into the penalty area. In the 65th minute, substitute Josh Casey delivered an inch-perfect cross towards the back post, where Kretzschmar arrived unmarked to head back across the keeper into the back of the net!

The pressure had been building, and the Cards thoroughly deserved a lifeline in the game. The Woking front line was causing all sorts of problems, and Darren Sarll in the home dugout had seen enough, hauling off Alex Bradley for the more established Worthington.

It seemed to be a game full of â€˜nearlyâ€™ chances, particularly with the bulk of set pieces that Woking amassed. Diarra and Gerring couldnâ€™t quite bully their counterparts in the air in the way they usually do against an extremely well-drilled Yeovil defence. Napa replaced Ashford in Wokingâ€™s third and final change, but the game had grown scrappy once again, and the referee was handing out cards like it was Christmas.

Realising time was almost up, Woking loaded the box for a series of free kicks, but Yeovil saw the opportunity to counter, and for the third time of the afternoon Knowles lined up a shot from outside the box under minimal pressure, but last seasonâ€™s Player of the Year, Craig Ross, was equal to his effort, as he has been on countless occasions this season, and tipped over the bar!

Woking countered from the resulting corner, but an extremely cynical yet professional foul from Charlie Lee saw him pick up the ninth yellow card of the game, and give Woking one last chance to snatch a late point. However, once again, Yeovil stood firm, and the referee blew the final whistle â€“ the Cards just hadnâ€™t been dominant enough for large periods of the game.

Dowse will almost certainly be disappointed that we couldnâ€™t pose more of a threat from the huge number of corners and free kicks that we have, but Yeovil are a strong side with huge short term ambitions of returning to the Football League. We now turn our attention to Tuesdayâ€™s game when we host Altrincham, with the hope of avenging the 1-0 defeat versus ten men earlier in the month.

Man of the Match: Ben Dempsey â€“ He had a tidy game in central midfield for the Cards, breaking up play and did well to continuously retain the ball in difficult conditions.