On 10th March 2020, Kingfield hosted 1,486 fans. Woking lost. It poured with rain. There were more individual mistakes than moments of quality. But it was football.

That was a Tuesday; by Friday, Wokingâ€™s next game had been called off. The rest of the season would follow suit, along with normal life in general.

277 days later, 799 fans returned to the hallowed Kingfield turf. Woking won. The sun shone. There were several moments of absolute quality â€“ and some hilarious mistakes. But most importantly, once more, we have football. The hard work of volunteers, and the exemplary conduct of the spectators, have claimed back a little slice of normal life.

As wonderful as it is to be back, it must be said that Woking have performed above all expectations this season in the absence of fans, with the Cards starting the day three points off of third. Consecutive 1-0 defeats to Sutton United and Notts County in the lead-up were frustrating but outweighed by drubbings of Dover Athletic and Barnet. The only change in personnel from the County game â€“ Matt Jarvis taking the place of Kane Ferdinand â€“ was necessitated by injury.

Kick off brought the first roar from the Kingfield Road End for nine months, and the Woking faithful would barely have to wait 120 seconds for their first moment to savour. From Wokingâ€™s first attack a lung-bursting run from Kyran Lofthouse down the Hartlepool left went unchallenged, and the Oxford United loanee was able to float a ball into the Poolsâ€™ six-yard box. With the visitors unconvincing in their efforts to clear, the bouncing ball fell to Matt Jarvis, who fired a dipping volley past Ben Killip and into the bottom corner.

As homecomings go, a technically brilliant goal from a former England international inside the first three minutes isnâ€™t bad.

The quick start would set the pace of the first half. Woking rarely line up in a 4-4-2, but Alan Dowson had chosen to match Hartlepool and press the visitors on a man-to-man basis. With both teams playing the same formation and trying to maintain a high line, pushing their strikers onto the opposition backline, chances were aplenty in the opening stages. Slavi Spasov (picture above) should have done better with a Jarvis flick-on that he scuffed straight at Killip, while Gavin Holohan wasted Hartlepoolâ€™s first shot of the game from twenty yards thanks to an unfortunate slip as he struck the ball.

It barely took Woking five minutes to punish that bit of bad luck. With Casey and Jarvis combining superbly through a sequence of corners down the left wing to earn a corner, Cooperâ€™s first corner of the game caused chaos in the Hartlepool box, with a scramble earning the home side a second corner. The ball in was the same, and again not dealt with; Davisonâ€™s leap at the near post only connected with thin air, and as the ball bounced on the six-yard line, Jack Cook was able to hook it home almost unchallenged to double the Woking lead. 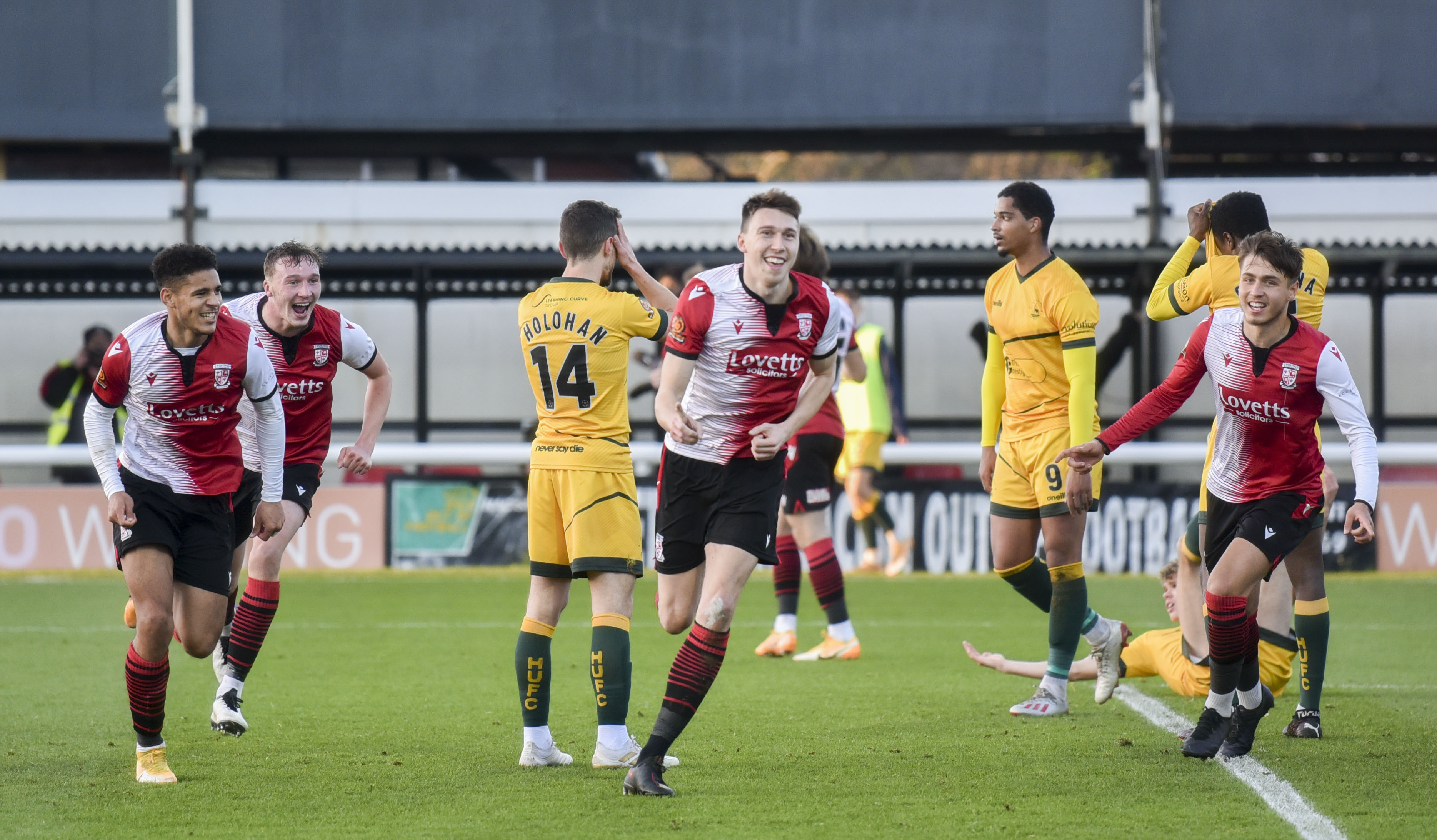 With a hard-earned lead, Woking were able to exert a certain amount of control on the game for most of the rest of the half. The Cards clearly set out to float set pieces into central areas, regularly winning flick-ons and putting the visitors under pressure, but unable to find a telling opportunity to shoot. Spasov and Davison were both regular outlets, working extremely hard to hold the ball up and bring others into play.

It should also be said that Hartlepool had their best spell of the entire game in the last fifteen minutes of the half. Norwich loanee Mason Bloomfield was a powerful aerial presence, helping Poolsâ€™ make ground down the Woking left consistently, and as added time was announced he was targeted by a vicious cross from Lewis Cass, playing at right full back but regularly bombing beyond his winger to create an overlap. Saul Shotton was the unfortunate man attempting to mark him, with the cross cannoning off of the defenderâ€™s shinpads towards the Woking goal â€“ only for Craig Ross to pull out a superb reflex save low to his right to keep the clean sheet.

Half time was blown moments later. From the clean sheet to the quality of goals, the Cards couldnâ€™t have asked for a much better first forty-five in front of the returning fans.

With no changes at half time for either side, it was no surprise that the game continued to be something of a sparring match in the opening stages of the half. High lines from both sides made the pitch congested and difficult to manoeuvre within, with Woking looking to send runners into the channels via long balls to make ground. Manager Dave Challinorâ€™s audible demands for tempo were not, it appears, effective; within ten minutes of the restart, Bloomfield and left winger Rhys Oates were replaced by wide man Claudio Ofosu and seventeen-year-old forward Joe Grey.

The Woking press had not dipped in intensity, and on the hour mark it would reward the hosts with a third. An under hit pass from Killip was pounced upon by Ben Dempsey as the keeper tried to play his way into midfield, and the Charlton loanee did superbly to skip past challenges from Shelton and then Odusina as he drove across the pitch. Breaking into the penalty area on the left-hand side, the young midfielder clipped a pass across goal to Spasov, who slotted home from close range for his third goal of the season.

Hartlepool would muster up some half-decent chances to try and claw themselves back into the game, with new signing Armstrong forcing a save from Ross after good work from Holohan, but it would take a red card to change the balance of the tie. Chasing down a long ball in the left channel, Max Kretzschmarâ€™s tackle was late, but appeared innocuous; the referee considered it violent conduct, to the total bemusement of all in the ground. Alan Dowson was booked for his protests â€“ presumably his first yellow card since 2006.

Within five minutes, Hartlepool had taken off centre-half Odusina for a forward in Ryan Donaldson, and you had the sense that Woking would be under the cosh for the final phases. But in spite of the one-man disadvantage, and the part time vs. full time fitness levels, the home side always felt in control. Dropping to a 4-4-1 system and continuing to use long balls into the channel to relieve pressure worked superbly, with Hartlepool unable to make any meaningful ground into the Woking box. The only attacks that would complete with any regularity were early crosses from midfielder Nicky Featherstone, trying to whip the ball in from the left-hand channel. None were a serious threat.

Indeed, Woking were able to make some substitutions to mark the return from injury of Tommy Block and young midfielder Jack Skinner â€“ and with Kretzschmar suspended and Ferdinand returning from fitness, both may find themselves in the starting line-up over the coming weeks. Skinner was almost able to set up fellow academy graduate Jayden Wareham for a fourth, which would have put even more gloss on an impressive result.

Not that it was needed. The return of fans, the nature of the performance and the comfortable result added up to a perfect day for Cardinals faithful. The exceptional work and admirable diligence of the volunteers who made Kingfield safe for fans again were the bedrock of a fantastic day for Woking fans, and another tiny step towards normality.

Man of the Match: Ben Dempsey. The loanee had his best performance in a Woking shirt by a country mile, with a battling display crowned by a magnificent assist for the third goal to put the game beyond doubt.