10:30am, Tue 10th Nov 2020
With Remembrance Day being tomorrow, Woking Football Club would like to remember one of our greatest ever players, Evelyn Lintott, who lost his life on the first day of the Battle of the Somme.


Evelyn Henry Lintott was born at Busbridge near Godalming on 2nd November 1883. The son of a local sheep dealer and one of eight children, his family moved to Woking and settled at The Grove, Horsell - about one hundred yards from the site of the Cardinals' first ground on Wheatsheaf Common. Evelyn was a pupil at the Royal Grammar School in Guildford and then became a physical training teacher at Maybury School in Walton Road, Woking. It was at the RGS and Woking FC that he served his football apprenticeship.

Evelyn made his Woking debut just two months after his sixteenth birthday and scored the winning goal in a 2-1 victory at Brookwood. Starting as a forward, he was prolific in front of goal and is currently still ranked twentieth in the all-time list of Woking goal scorers, bagging 66 goals in only 108 appearances. In 1903 he became a centre-half and, from the centre of the park, he soon showed skilful, robust football, exercising fine judgment in his tackling and distribution. Evelyn became the captain of the Woking team and played alongside four of his brothers - Stacey, Cuthbert, Morris and Keith. Lintott's amateur career at Woking saw him win the Surrey Charity Shield twice, the East & West Surrey League and the West Surrey League. He also went on to represent Surrey on ten occasions between 1903 and 1905. 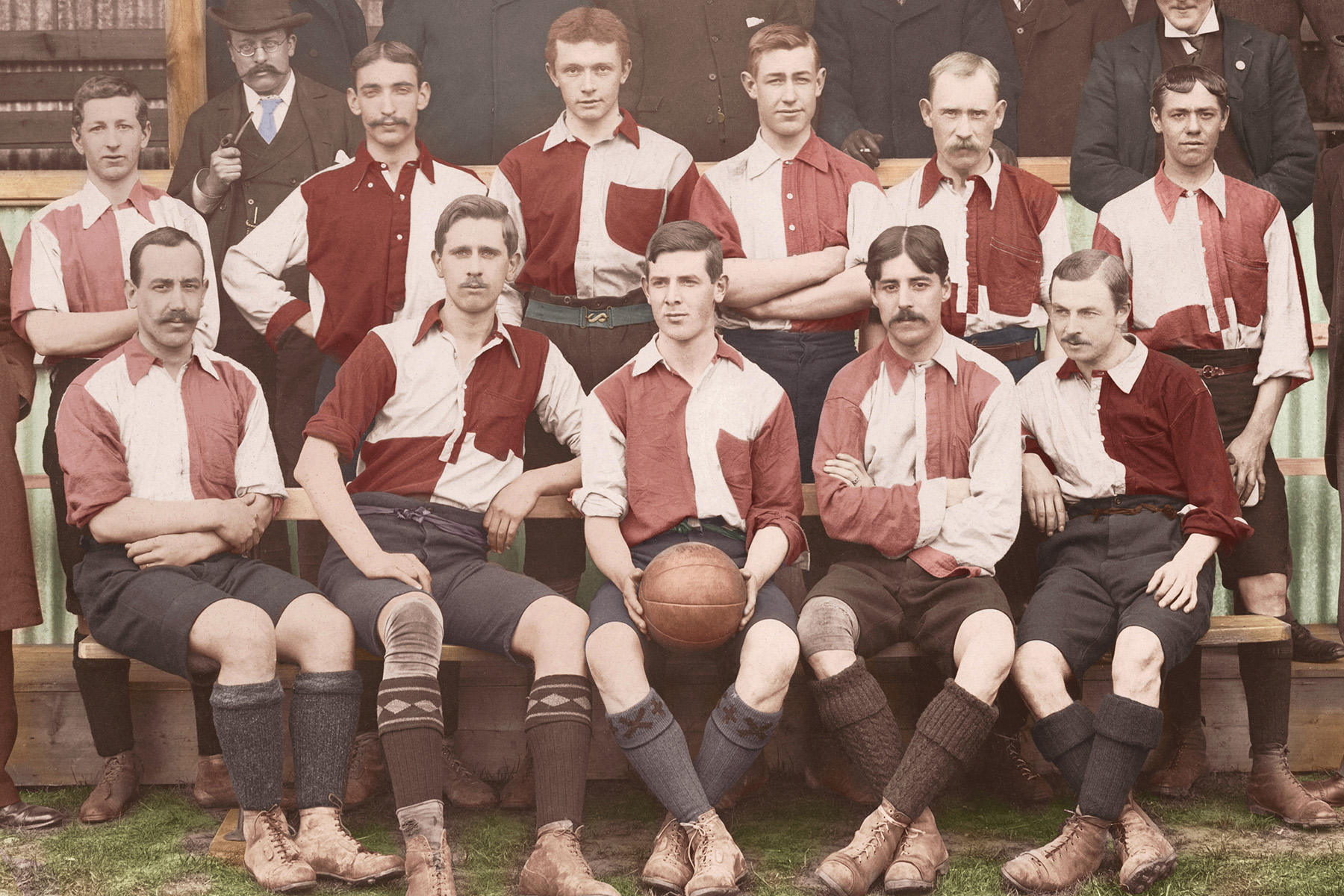 Evelyn Lintott on the front row holding the football, his brother Stacey to his right.


Unfortunately for Woking, in 1905, Evelyn Lintott went to Teacher Training College in Exeter and could then only play for the Cards on limited occasions. He played some games for Plymouth Argyle, captained Devon and then, on starting to teach in London, signed for Queens Park Rangers. This was not the end of Evelyn's Woking career as he still turned out on two further occasions. By this time he had already made two England Amateur international appearances: a 6-1 win over Ireland at White Hart Lane and a 12-2 win over Holland at Darlington.

After nine seasons of association with Woking FC Evelyn's last appearance saw him playing alongside his brother Stacey Lintott in a 1-0 win over Farncombe at a frozen Pembroke Road on 4th January 1908. This was just a week before Woking's epic encounter with the mighty Bolton Wanderers in the First Round of the FA Cup. Unfortunately Evelyn Lintott didn't make an appearance for Woking the following Saturday at Burden Park and the Cremators (as Woking were nicknamed at the time) were beaten - but not disgraced - 5-0 on the icy Lancashire turf by their Division One professional opponents.

Lintott had made 35 appearances for QPR, scoring one league goal, winning the Southern Football League and playing two Charity Shield matches against the Football League champions Manchester United, when he caught the eye of Bradford City manager Peter O'Rourke. On 21st November 1908 O'Rourke travelled to London and met Lintott at Paddington station - Rangers were returning from a match at Swindon. Lintott signed for Bradford that night for a fee of over Â£1,000. The transfer went a long way to helping QPR out of serious financial problems.

At City Lintott was heavily involved with the emerging Players' Union, known today as the PFA. From 1910-11 he was the organisation's chairman, with his brother Stacey editing the Union's 'Football Player Magazine'. After 57 appearances and 2 goals for the Bantams, Lintott moved to Leeds City, the leading professional club in Leeds at the time, on 7th June 1912. At Elland Road he made 45 appearances, scoring 1 goal.

Evelyn joined up shortly after the outbreak of World War 1. On 14th September 1914, frustrated at the delays in recruiting in Bradford where he still lived, he enlisted at Leeds with the 15th Battalion West Yorkshire Regiment (Prince of Wales Own) - the 'Leeds Pals'. One of the first to volunteer, Lintott was quite supportive of players who chose not to, pointing out, perhaps somewhat naively, that football was generally their only livelihood, and a leg wound could easily end their only career. He did think that, with encouragement, perhaps half a dozen players from each club would enlist. There was however, considerable criticism from the public at large about sportsmen not enlisted, and finally a lot did, some forming specific sportsmen's battalions. The Leeds Pals had quite a number of athletes from a variety of sports, and gained a reputation for winning trophies.

In June 1915 Lintott was given a commission as 2nd Lieutenant, the only professional footballer, he believed, to be commissioned. He was posted to A Company and made commander of No. 1 Platoon, before being made a temporary Lieutenant. With training at Colsterdale, Ripon and Fovant complete, on 7th December the Pals boarded the liner 'Empress of Britain' at Liverpool bound for Egypt to guard the Suez Canal from the Turks. A minor collision with the French mail ship 'Dajurjura' forced an unscheduled stop at Malta for repairs. Despite an encounter with a submarine, they landed safely at Port Said on 21st December.

After three months in Egypt, Lintott and the Pals boarded the troopship Asconia on 1st March en route for France. They landed at Marseilles and were transported to the front in time for the assault on the Somme.

One 1st July 1916, the Battle of the Somme began, and at 0730hrs the Pals rose from their trenches and began to advance into no-man's land. Their objective was the village of Serre, less than a mile away, but despite some early reports, they never made it. The Leeds Pals suffered heavy losses, and of the twenty-four officers who left the trenches, most were killed, just a few being wounded. Among the dead was Evelyn Lintott. The Yorkshire Post on 11th July reported his death as follows:

â€œLieutenant Lintottâ€™s end was particularly gallant. Tragically, he was killed leading his platoon of the 15th West Yorkshire Regiment, The Leeds Pals, over the top. He led his men with great dash and when hit the first time declined to take the count. Instead, he drew his revolver and called for further effort. Again he was hit but struggled on but a third shot finally bowled him over. Lieutenant Booth, too, though in sore agony from a shell fragment which penetrated the shoulder and must have touched the heart, tried his utmost to go forward, but pitched forward helplessly after going a few yards. He and Lintott were two gallant sportsmen who knew how to die â€“ but then so did all the boys. They went out to almost certain death with the cry â€˜Now Leeds!â€™ on their lips.â€�

His body was never found, and he is remembered on the Thiepval Memorial, and on our memorial in the Leslie Gosden Stand which was unveiled in 2016.

Watch the unveiling ceremony of the commemorative plaque below.