Woking suffered their fourth defeat of the season in a bruising encounter at Huish Park. A first half masterclass from the Glovers frontline left the Cards with all to do. Despite Ibrahim Meiteâ€™s spectacular 25 yard drive, the second half fightback proved to be too great a challenge to overcome.

The Cards travelled to a side that just five years prior had been playing in the second tier of English football. Despite the Glovers rapid descent down the league system, signs were now apparent from recent form that they are potentially placed to regain their position in the Football League at the first attempt. Whereas the Cards had produced their best form during August, Yeovil had shot up into the top three with a September that had delivered them maximum points under League Manager of the Month Darren Sarll.

Ben Gerring returned to the Woking line up from his three match suspension with Godfrey Poku also receiving a recall. Toby Edser and Jake Hyde both dropped out of the squad. These changes reflected a changed formation with Alan Dowson reverting to a system with three centre halves in position, Cook and Casey deployed as wing-backs and Loza in an advanced role with Tarpey.

With a light rain falling prior to kick off the Cards won the toss and opted to change ends to attack the vacant uncovered Radio Cabs terrace, usually reserved for the away fans. Thankfully the 172 loyal Cards fans that had made the long midweek journey had been rehoused under cover in part of the Screwfix Community Stand located on the side of the pitch.

Backed by their own boisterous support the home side went on an early attack. Worthington found space on the right and crossed in for Murphy to head straight into the arms of a relieved Ross.

The Cards got the chance for their first attack minutes later. A forward ball was nodded on by Tarpey to Kane Ferdinand. With a clear sight on goal Wilkinson sensed the danger and was able to make an excellent tackle to deny the Cardsâ€™ midfielder the chance to shoot.

Ten minutes in, Loza won the ball midway through the Gloversâ€™ half. His pass was played wide to Casey in space who returned forward to Loza. A short pass then played in Tarpey, who though surrounded, took a couple of touches to switch feet and tee up a low powerful shot at the bottom corner. Only the quick reflexes of home goalkeeper Adam Smith denied Tarpey the early goal.

From the resulting corner swung back in by Tarpey, Parry got up first but was narrowly unable to divert his header below the crossbar with Smith appearing to be beaten.

This miss proved costly as some minutes later Duffus floated a searching cross from wide on the right. Gloverâ€™s forward James Smith was first to get there and his delicate knock back teed up Rhys Murphy to strike past Craig Ross for his sixth goal of the season.

Midway through the half Ross played out an accurate kick to Tarpey who found space along the left. As the Yeovil defence scrambled back the Cards forward switched the ball across to Cook who raced forward on the opposite wing. With it looking like the was just the goalkeeper to beat, Cook cut back inwards looking to play in a teammate. However, having charged back Wilkinson was able to make up the ground and shepherd the ball to safety before the pass could be made.

With the minutes of the half winding down the home side doubled their lead. A short pass was threaded through to Duffus who took a slight touch forward to control the ball from underneath his feet. Parry appeared to clumsily mistime his tackle which allowed referee Middleton to point to the penalty spot. Top scorer Murphy stepped up and though Ross produced an excellent save to claw the ball away, the rebound was unkind and allowed Murphy to slot home his second goal of the evening at the second attempt.

Shell-shocked from conceding a second goal the Cards appeared to be caught out by the home sideâ€™s continued relentlessness. As the board for added time was raised Murphy escaped along the left flank after a missed tackle from Gerring. Whereas it appeared some of the defending team expected the refereeâ€™s whistle to be blown the advantage was given allowing Murphy to play a simple pass inside for James Smith to score Yeovilâ€™s third and cap off a dominant half for the hosts.

With the game appearing to be all but gone Alan Dowson made a double substitution ahead of the restart. Gerring and Poku, the two players recalled for the game both made way for Kretzschmar and Meite. This enabled a return to the formation more akin to a 4-4-2.

Unfortunately it appeared to make little difference to a game that the home side seemed happy to resume control of. After an early attempt for Murphy which was denied by Ross, the Glovers striker again found himself clean through. Only tireless tracking back by Diarra was able to disrupt the charge strikerâ€™s for goal in his attempts to extend the lead further.

Woking made their final change before the hour mark with Paul Hodges introduced for Loza. This seemed to give the Cards a little confidence that had previously appeared to be missing. A quick throw by Casey was launched long to Tarpey. Holding the ball up well he passed back to Meite in the centre who took a touch and launched an unstoppable shot into the top corner of the Yeovil net from 25 yards out.

Building on from the goal, the Cards pushed on further. A Kretzschmar free kick from out on the right was played into a crowd of bodies. Diarra rose first but was unable to keep his attempt down.

Woking would feel that they could have been awarded a penalty in the 77th minute due to the similarities to one awarded to the hosts in the first half. Meite appeared to have his legs taken by Wilkinson when in control of the ball in the penalty area. Despite a strong appeal referee Middleton waved away protests. The aftermath led to a booking for the Cards striker for dissent. 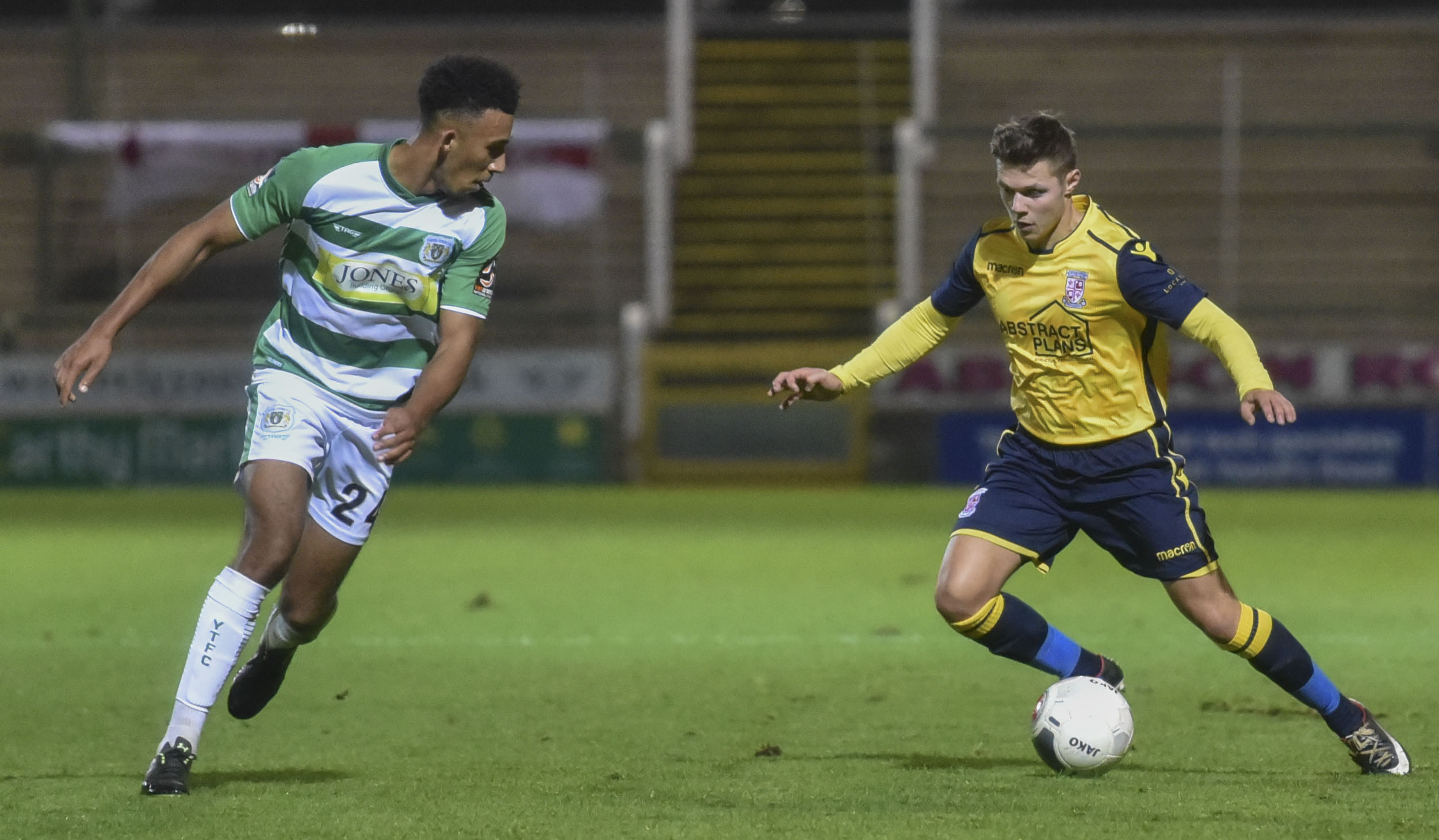 Paul Hodges off on a run; pic: David Holmes

Late efforts from Meite, Tarpey and Kretzschmar all appeared to offer Yeovilâ€™s goalkeeper and defence some discomfort. However there was a sense that the result had long been decided earlier in the game and a comeback from the visitors was always unlikely.

The result meant that though Yeovil remain third they are now only a point behind leaders Halifax. With defeat, the Cards drop a place but still remain within the play-off positions.

Another stern test awaits on Saturday and Alan Dowson knows that he must now pick up his players for the next battle away at Barnet.

Man of the Match: My choice is Ibrahim Meite; an outstanding 25 yard strike helped to lift the whole teamâ€™s performance and offered slim hope that they could take something from the game.
Tags
Share Facebook Twitter Print