Woking were hoping to end a rotten September with a win over Boreham Wood at the Laithwaite Community Stadium in the final game of the month. However, a loss against a side that played with 10 men for a large part of the 2nd half makes September a month to forget for the Cards, as they failed to pick up a single win. The pitch was in immaculate condition and despite it being fairly cloudy, it was a pleasant afternoon and perfect conditions to play football. Woking fans came in great numbers as always, with over 2,200 in attendance at Kingfield to support the team.

Jake Hyde and Dave Tarpey returned to the side, after missing Tuesdayâ€™s away defeat against league leaders Bromley, whilst Ben Gerring and Tyreke Johnson were still out through suspension and injury respectively. Two other players returning to the Laithwaite Community Stadium were former Cards Keiran Murtagh and Mark Ricketts, starting for the away side. Despite a favourable line up against opposition that sat in 18th place going into the game, complacency proved to be an issue for Woking, and National League top goal scorer Kabongo Tshimanga punished the Cards to overturn a goal deficit for the visitors. There were countless chances for Woking to get all three points throughout the game, but on this occasion the home side werenâ€™t able to pick up one.

It was a scrappy start to the game, with neither team able to retain possession. The first significant chance however came inside the 5th minute, where a mistake from Manny Parry gifted Tshimanga the ball down the left flank. Boreham Woodâ€™s top goalscorer tried to pick out Tyrone Marsh who was making a darting run into the penalty area, but his cross was overhit to the relief of the former Boreham Wood centre back.

The opener of the game arose from Wokingâ€™s first corner 11 minutes in, where loanee Toby Edser put in a delightful cross into an undefendable area for Boreham Woodâ€™s defence. Kane Ferdinand, who made his 100th appearance in a Woking shirt on Tuesday, got enough on it to convert from inside the 6-yard box. The midfielder finds himself on the scoresheet for a 3rd time this season, but much of the credit will have gone to Edser for his exquisite delivery. 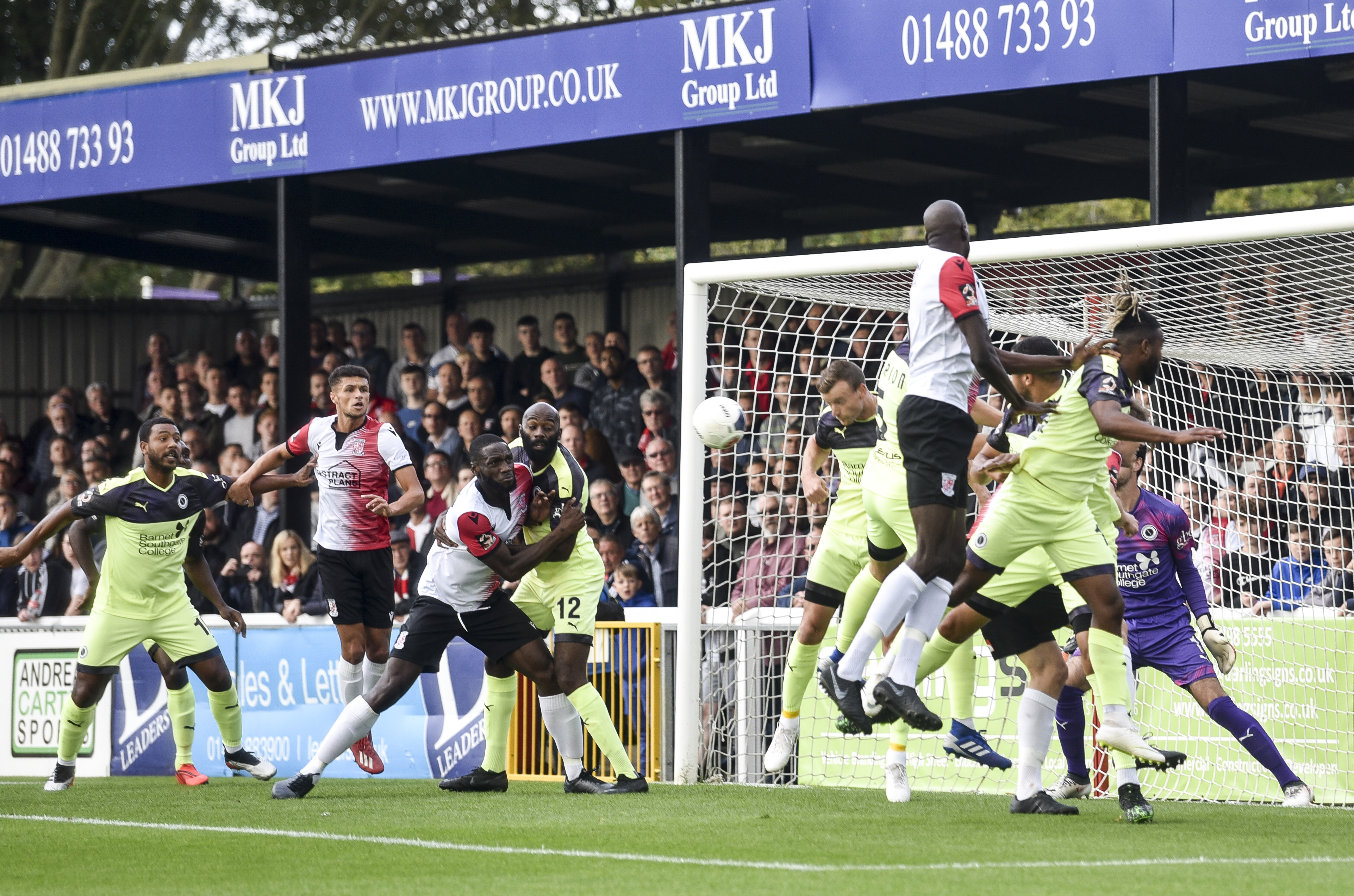 In spite of this great start, Woking were unable to carry momentum after their goal, and Boreham Wood showed character in continuing to attack fearlessly. Tshimanga, Sorba Thomas and Tyrone Marsh were linking up well going forward and showing signs they could create problems for Wokingâ€™s back line.

Woking responded soon after when a succession of corners for the home side gave Boreham Wood real problems. The first of these was a Tarpey cross which was headed away only as far as Edser who volleyed it with terrific technique, but the shot was deflected just over the bar. Minutes later, the best chance to double Wokingâ€™s tally came from another Tarpey corner, who picked out Hyde with acres of space in the centre of the penalty area. Wokingâ€™s top goal scorer tried to cushion his shot goalwards with the inside of his foot, but it ended up narrowly clearing the bar.

Nevertheless, Boreham Wood brushed off these chances not allowing it to affect their confidence, and they grew into the game in the final 15 minutes of the half. In the 38th minute, Tyrone Marsh found himself with space to penetrate, and threaded through the last man Woking wouldâ€™ve wanted inside the box - Tshimanga. He clinically fired it past Craig Ross - who got a slight touch - into the bottom right corner. The goal was a fair reflection of how the game was swaying, as Wokingâ€™s intensity had dropped slightly leading up to the equaliser.

The travelling supporters almost saw their team go in the lead on the stroke of half time, when Marshâ€™s wonderfully struck free kick on the edge of Wokingâ€™s 18 yard box rattled the crossbar. It was a scare for the Cards in stoppage time, and would have certainly had an influence on Alan Dowsonâ€™s half time team talk.

It was a breathless start to the second half when, within 2 minutes, Jack Cook got the better of Femi Ilesanmi on the right flank and put in a menacing cross into the heart of the box. Jake Hyde met it with an excellent low header, and guided it into the top right corner of the net, beating the helpless David Gregory. However, to the despair of the delighted Woking fans, the goal was ruled out for offside, denying Hyde his 8th of the season.

Dramatically, following Wokingâ€™s disallowed goal, Boreham Wood attacked with menace at the other end of the pitch. A low cross from the left hand side led to a goalmouth scramble which appeared to come off Sorba Thomas last. His touch presented a delightful opportunity for goal scorer Tshimanga, who inevitably finished his chance with ease, getting his 10th of the season. Woking will have felt hard done by considering they had thought theyâ€™d taken the lead moments before, but the clinical nature of Boreham Woodâ€™s front man meant the visitors were in front for the first time in the game.

In the 54th minute, the gameâ€™s momentum turned completely when former Woking skipper Mark Ricketts was given a straight red card. Despite getting the ball, he appeared to make a dangerous two-footed challenge on Edser, which meant referee Alan Dale had no choice but to dismiss the defender.

Woking used this momentum to their advantage and so did the Woking supporters who spurred their team on to get an equaliser. A long teasing throw-in from Jack Cook landed in a dangerous area in the box, which centre back Manny Parry couldnâ€™t finish, pulling his effort wide of the post on the turn from very close range; this was perhaps a chance Woking fans wouldâ€™ve hoped had fallen to a more natural goal scorer.

In the 71st minute, Alan Dowson made his first change and brought on Paul Hodges for Godfrey Poku, hoping he could make an impact in Wokingâ€™s final third. Minutes later, a corner defended well by the visitors fell in the path of Jamar Loza, who was having a great influence in the second half. He took the ball down nicely, and curled an effort from a stationary position brilliantly, only to be denied by the woodwork.

The final 15 minutes proved to be a challenging spell for Boreham Wood. Bookings for Thomas and Murtagh for non-foul related incidents were reflective of the away sideâ€™s desperation to survive these last moments without conceding.

There was a multitude of opportunities for Woking to equalise late on; one came from substitute Paul Hodges whose impressive low-driven long range strike was well stopped by the keeper. A minute later, a long promising ball from Josh Casey was won in the air by Cook ahead of David Gregory in goal, tipping it onto Parry who headed it on target into a goal filled with Boreham Wood shirts. His header was blocked on the line, only to fall to Ferdinand who really shouldâ€™ve doubled his tally when he blazed his effort over the bar, missing an open net.

Woking would rue their missed opportunities however, as Boreham Wood saw the game out, showing resilience until the final whistle. This was a golden opportunity for Woking to pick up three points, and this result will have been a huge blow for the Cards. Nevertheless, the Cards will have to put this dreary winless month behind them, and focus on getting back to winning ways next Saturday at the Laithwaite Community Stadium, facing a Wrexham side just outside of the bottom 4.

In the last hour
Match Highlights