The Cardsâ€™ last game in their league programme resulted in a disappointing defeat, their seventh at home in this campaign. With Woking having secured a second-place finish (and home advantage in the play-offs) with their fine win over Dulwich Hamlet on Easter Monday, and the visitors having lifted themselves away from the relegation zone, there was, in practice, not a great deal for either team to play for in this encounter. However, it could be argued that a convincing display might have been a morale boost for the Cards ahead of what seems certain to be a stiff challenge from either Bath City or Wealdstone, both of whom have already beaten Woking convincingly at the Laithwaite Community Stadium. In truth, Woking ought to have wrapped up a win early in the second half of this match after Armani Littleâ€™s fine free-kick had given them a 1-0 lead on the stroke of half-time. But a rather familiar tale of missed chances, followed by porous defending, enabled the visitors to secure two late goals to end their season on a high.

Dowse made four changes from the side which had started at Dulwich. Olu Durojaiye and Greg Luer dropped to the bench, while Reise Allassani missed the game through injury, with Max Kretzschmar apparently rested. In came Kane Ferdinand, making his first start since 30 September following his long lay-off through injury, Jake Hyde, Paul Hodges and James Ferry.

On a cold, blustery afternoon the visitors seemed intent on shooting from distance whenever the chance arose and tried their luck from the centre circle straight from the kick-off. Craig Ross carefully watched as the ball went narrowly over the crossbar. But it was Woking who really threatened early on, as Ferdinand threaded a pass to Hyde in the box. Turning sweetly, he chipped a shot to the far corner, with City keeper, Tom King, just managing to fingertip the ball onto the bar. Another half-chance fell to Hyde a few minutes later after Kieron Cadogan had cleverly beaten a defender to set up an attack down the right before feeding Little. The latterâ€™s cross seemed to bounce off Hydeâ€™s knee and away to safety. Next it was Hodgesâ€™s turn to threaten as Moussa Diarra nodded down at the far post, but Hodgesâ€™s shot went straight at King.

With Little, Ferry and Cook all pushing forward, it seemed only a matter of time before the Cards would get their noses in front. But they were given a warning in the 20th minute when a swift counter-attack from a Woking corner failed only because the final ball was pushed too wide of the area. Another warning came when Fabien Robert, left completely unmarked from a short corner, was foiled only by a brave block from a defender.

After a typically darting run by Hodges, which led to a Gloucester booking for a foul, the visitors attacked again, with Ben Gerring blocking an effort by the lively Jake Jackson, which was soon followed by unconvincing shouts for a penalty.

Woking continued to enjoy more of the possession midway through the game, with forays forward by Casey and Cook, but without looking like they would test King, let alone score. Cook made a smart interception in defence in the 38th minute to cut out Robertâ€™s cross before getting forward again to fire in an excellent cross to Hyde, whose deft flicked header went only inches wide. A fine move started by Little and Hodges then saw Hyde help the ball on to Ferry at the far post. Unfortunately, the Stevenage loanee blasted over from close range.

Just when it looked as though half-time would see a frustrating 0-0 scoreline, Woking were awarded a free-kick just outside the box for a foul on Ferdinand. Up stepped Little to curl a superb strike over the wall and into the net before King could barely move a muscle. 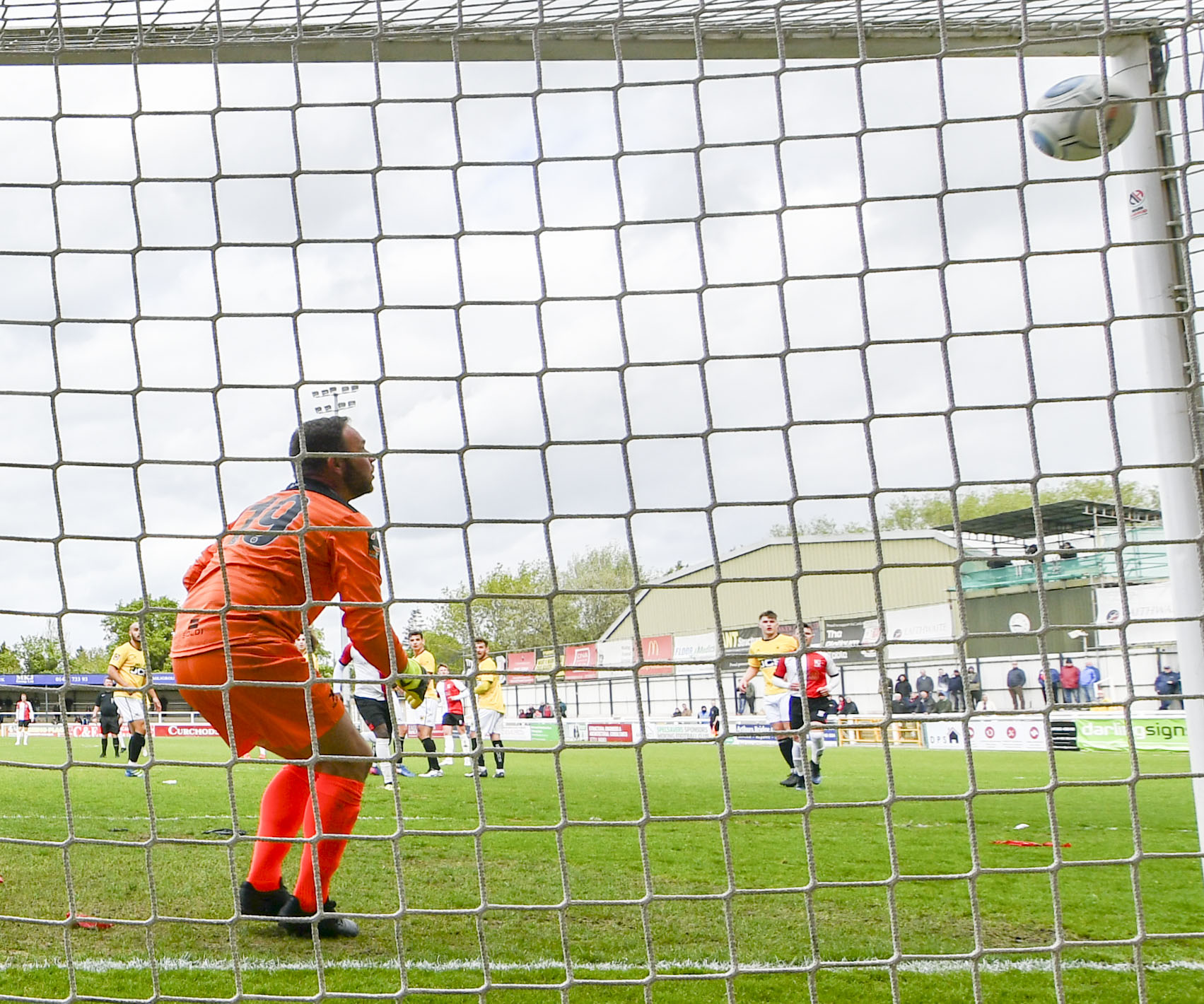 The refereeâ€™s whistle blew for half-time almost as soon as the game resumed.

Dowse made an interesting change at half-time, bringing on 18-year-old Sam Mason in goal in place of Craig Ross. Any thoughts that Sam might have a gentle â€˜end of seasonâ€™ run-out were soon banished. Woking started the second half quite brightly, with some of the interplay reminiscent of the second half at Dulwich, but, as has happened not infrequently, chances were passed up and the Cards were made to pay dearly for increasingly alarming defensive lapses. There were early signs of the latter when a ball over the top sent Jackson clear. The first of several notable saves saw the young keeper somehow manage to divert the ball wide of the goal. Woking were nearly caught out again by the resulting â€˜short cornerâ€™ routine but Robertâ€™s effort produced a comfortable â€˜takeâ€™ for Mason.

The Cards then gained the clear ascendancy as they pushed forward. Lovely interplay between Hyde and Hodges saw the latter burst through but, with only the keeper to beat, he prodded the ball wide. A more difficult chance fell to Ferdinand. Unable to get over the ball, his header from Caseyâ€™s cross flew over the bar. More attacks followed as both Casey and Cook put decent crosses in, with a defender being forced to divert the ball onto the roof of his own net.

But a huge â€˜let offâ€™ for Woking followed. Casey, though far upfield in a Woking attack, was the last man as he was uncharacteristically robbed of the ball. Hanks ran on and on but Mason came to the rescue again, blocking his shot.

Two minutes later the young keeper saved Wokingâ€™s blushes once more as he tipped Parkerâ€™s effort round the post after the striker found himself slicing right through an increasingly porous Woking defence.

After Harvey Bradbury had come on for Hyde it looked certain that Hodges would make amends for his earlier miss. Seizing perfectly on a Cook long throw, he spun and shot in one move, only to see King pull off a fantastic save. Another good chance followed as Cook did well to chip the ball to the far post but, in spite of two or three Woking players converging there, the ball somehow squirmed away from the target.

Ferdinand, who had hitherto been pretty neat and tidy, erred dreadfully with a header back towards Mason which fell badly short. Substitute Zack Kotwica, whose direct running helped to turn the game in Cityâ€™s favour, shot strongly but, once more, Mason produced a fine save.

However â€“ and you could not say it had not been coming â€“ City finally got their reward in the 81st minute. Kotwica twisted and turned and managed to fire in a cross-cum-shot, which Jackson deflected in, giving Mason no chance.

More casual defending followed as Woking fell asleep at a free-kick. In the blink of an eye the ball was played into the Woking box and then turned in by Robert, via a deflection which wrong-footed Mason.

The Cards tried to rescue a point but it was too little, too late. Diarra looked as though he might have done better from a Casey cross and, right at the death, Cook headed over at the back post from another Casey cross.

Dowse rightly said in his post-match interview that this game did not really matter and that everything would turn on how his team performed in the semi-final play-off on Sunday 6 May, but Woking fans will nevertheless have been disappointed to see some familiar frailties returning after a much better display at Dulwich.