A Greg Luer hat-trick fired Woking to the top of the table (albeit until Torquay United played and won later in the day) in a feisty encounter against local rivals Hampton & Richmond Borough.

Luer opened the scoring in the fourth minute after a smart move, before rifling home on the half-hour and then rounding it off with a superbly taken second-half penalty to get 2019 off to the perfect start for the Cards.

But the victory was slightly marred by what looks like a serious injury to key playmaker Max Kretzschmar, which may rule him out of the FA Cup third round game against Premier League side Watford.

Woking were looking to do the double over their neighbours after last weekâ€™s 3-1 home victory. They were also seeking to extend a six-match winning run in the league, culminating in a 2-0 win against Eastbourne Borough at Kingfield, and keep up the pressure on leaders Torquay. The last time they won six matches in a row was in April 2014 in the Vanarama National League under Garry Hill.

However, with five games in the last two weeks and half an eye on their FA Cup tie on Sunday, manager Alan Dowson rested key players Jamar Loza and Jake Hyde.

Dowson and his management team returned to their former club for the first time since leading them to the Vanarama National League South play-off final which they lost 4-3 on penalties to Braintree Town.

But the Hampton side was almost unrecognisable after new boss Gary McCann made wholesale changes over the summer, bringing in a host of players from his former club Hendon. One familiar face in the home line-up, however, was ex-Woking skipper Richard Orlu, who joined Hampton on loan from Welling United last month.

The hosts were trying to halt a three-game losing run which had seen them slump to 15th in the table before kick-off.

Dowson shuffled his pack, bringing in Luer, Kretzschmar and Paul Hodges for Loza, Aaron Eyoma and Hyde, who all moved to the bench. On a mild January afternoon, the Cards lined up in a 4-3-3 formation with Luer in the middle of a front three and Kretzschmar on the left and Hodges on the right.

Woking got off to the perfect start on four minutes when Hodges sprung the offside trap with a delightful through ball that Luer latched onto and rounded the keeper to slot home.

Hodges was in the thick of it again on 12 minutes when the ball fell to him on the edge of the box but he fired wide of the right-hand post.

Moments later Kretzschmar was booked for a robust tackle on a Hampton player before going down with a suspected hamstring injury which will likely rule him out of the Watford game, to be replaced by Loza.

On 19 minutes, Josh Casey whipped in a free-kick from the right which Ben Gerring got on the end of only to head narrowly wide of the right post.

Tyrell Miller-Rodney joined Kretzschmar in the book minutes later for another strong challenge.

On 27 minutes Woking won another free-kick which Toby Edser fired into the box and the ball fell to Luer, who lashed it home. 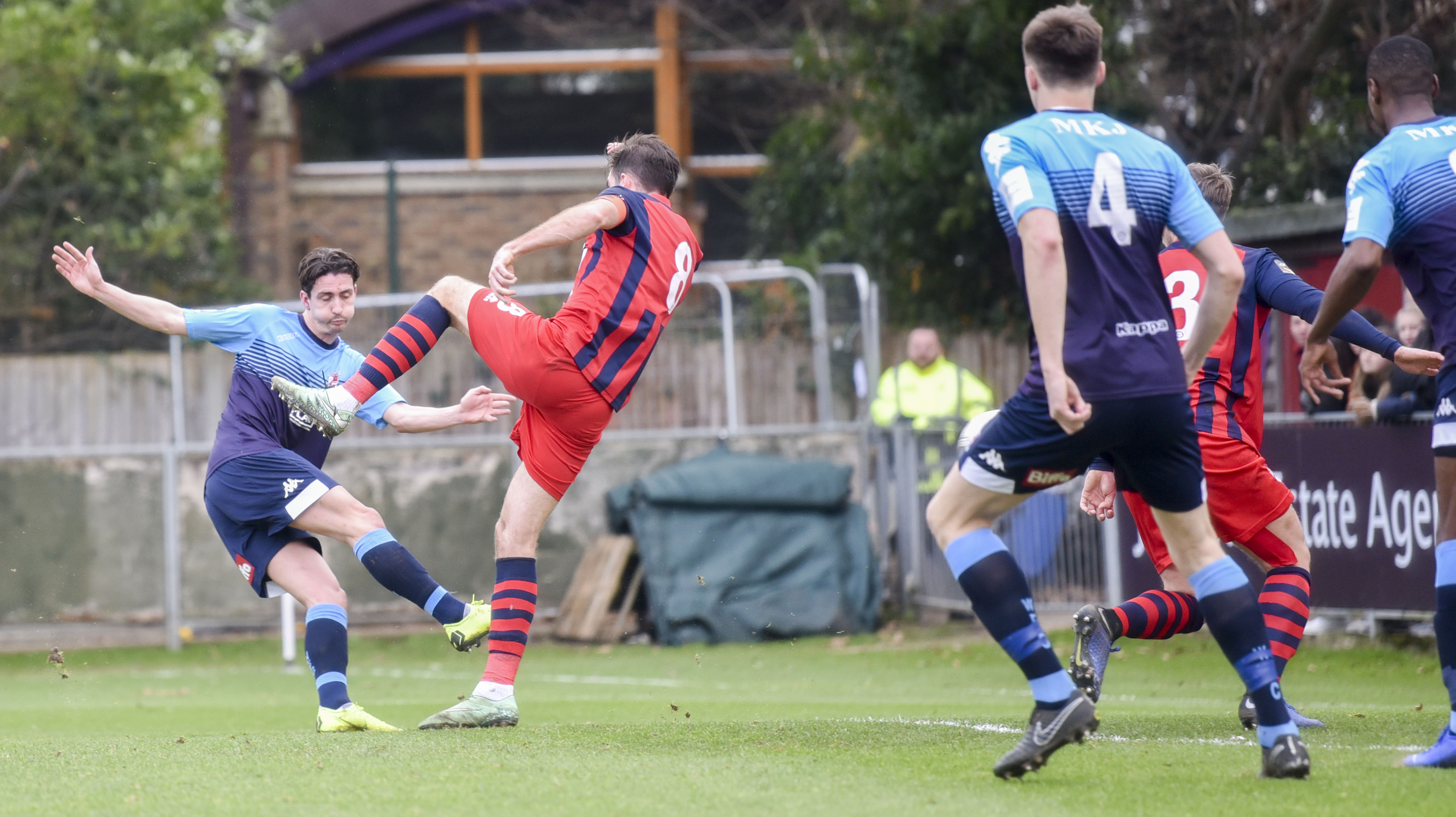 Greg Luer strikes on his way to a hat trick; pic: David Holmes

Oliver Sprague then saw yellow for a clumsy tackle on the lively Hodges.

On 32 minutes Sprague almost made amends when he floated in a free-kick from deep which fell to Luke Ruddick, but he fired well over the bar.

Moments later Luer teed up Loza on the edge of the box, but his shot was comfortably saved by Tom Lovelock in the Hampton goal.

Loza turned provider on 38 minutes, setting up Hodges, but his shot low down to the left was turned around the post by Lovelock for a corner
.
On the stroke of half-time the hosts had their first meaningful attack when Craig Dundas shrugged off Gerring and played a perfectly weighted through ball to Ryan Hill, but Nathan Collier nipped in to deny him as he was about to pull the trigger.

Luer looked to clinch his hat-trick early in the second half, firing the ball just over from the wide right on 46 minutes.

Loza then slipped his marker down the left flank and fired across goal with Edser lurking on the line, but Orlu cleared the danger.

Hodges was next to try his luck on 53 minutes after being teed up by Edser, but his shot rolled wide of the right post.

Christian Jolley was then booked for protesting when Woking were denied a penalty on 61 minutes after Hodges had burst into the box and appeared to be brought down.

On 62 minutes McCann had seen enough and rang the changes, bringing on Chris Dickson for Karl Oliyide and Casey Maclaren for Matty Wichelow.

Miller-Rodney then handballed after trying to stop another mazy Loza run and referee Tom Bishop pointed to the spot.

Orlu was also booked for protesting, but Luer stepped up to fire home the spot kick with aplomb and secure his hat-trick.

On 69 minutes Dowson replaced Edser with Eyoma, presumably to rest the Nottingham Forest loanee for the Watford match.

Moments later, Maclaren was booked for going in hard on Jolley.

On 75 minutes Liam Sole came on for Sam Cox and Woking made their final change with Luer being replaced by Noel Leighton.

Craig Ross was next in the book after the referee deemed he had taken too long over a free-kick and Eyoma followed him moments later for another crunching tackle as the game petered out.

It was a hugely satisfying performance for Dowson as the Cards look to build on an impressive first-half of the season.

Whisper it, but this Woking side are showing shades of Hillâ€™s 2011/12 promotion-winning team.
Next up the Cards host Watford in the FA Cup on Sunday.

Man of the Match: Greg Luer, a superb hat-trick from a man bang in form