Steve Snelling
12:21am, Sat 8th Aug 2009
Iâ€™ve been asked to give an update and some information in relation to Jon Boardman and his recent operation.

Jon underwent a double procedure on Tuesday 4th August at the Princess Grace Hospital in London which was carried out by Consultant Surgeon Mr Jerry Gilmore. For those who want to â€˜Googleâ€™ or look up the procedures on the internet, the technical names of the procedures are a â€˜Gilmore's Groin repairâ€� and an â€œAdductor Tenotomy.â€� The operation went well and after an overnight stay in hospital, Jon was discharged to start his re-hab. Since then he has represented the club at the re-opening of Woking Leisure Centre's gym, spent a couple of sessions at the gym and will be doing a further session on Saturday morning before travelling with the squad for our away fixture at Welling.

A little bit more about the procedures carried out!

The UK acknowledged expert on groin disruption syndrome is Jerry Gilmore, who first identified and carried out a successful repair of it in 1980. The repair procedure pioneered by Mr Gilmore was later to be named after him and is now commonly known as Gilmore's groin. The condition is also commonly referred to as Posterior Abdominal Wall Disruption or PAWD and â€˜Sportsman's Herniaâ€™, which I find a little misleading as the syndrome frequently doesnâ€™t involve any form of herniation.

So what is the condition?

The lower abdominal wall immediately above and either side of the genital area is made up predominantly of four layers of connective tissue originating from the abdominal muscles of the Transverse Abdominus, Internal Obliqueâ€™s, External obliqueâ€™s and Rectus abdominus (six pack muscle). This connective tissue combines together to form the â€˜Vâ€™ shaped ligaments which we can all feel in either side of our groin area. In this connective tissue are two openings on each side which allow other structures to come through. These openings are known as inguinal rings, of which there is an internal and external one. These tend to be areas of weakness and the twisting and turning associated with football can lead to tears in this area. In simple terms, this tearing/damage to connective tissue in the area of the superficial inguinal ring is â€˜Gilmore's Groin.â€™

What does the player feel & how does it affect them?

Generally, a loss of power with acceleration and kicking. Pain with twisting and turning during a game. Pain much worse the morning after a game. Pain with turning over in bed and getting out of the car. Rarely is there bruising. Usually the condition comes on gradually, although it can be caused by a massive one-off overload of the area. Players tend to rest the area for varying periods of weeks or months and the pain goes away only for it to gradually return when they start playing again. I frequently see patients who have been struggling for months with groin problems where the condition has been missed. The condition generally gets progressively worse, although players tend to be able to manage it with painkillers and rest in the initial stages.

How is it diagnosed?

Like any diagnosis itâ€™s vital to listen to the patient. Gilmore's Groin is a syndrome â€“ which means there are a number of things which characterise it. So, all the things mentioned above tend to lead towards it as a diagnosis â€“ however, as always, other things need to be ruled out, the most common one being problems with the joint at the front of the pubic area.

So what tests can we do?

I usually get players/patients outside on the training ground and observe them trying the movements which tend to aggravate the condition. Then I try and rule out other things that may be causing the problem.

Finally, it is possible to palpate the superficial inguinal ring - this test is invasive and informed consent needs to be obtained prior to carrying out the test.

I was taught how to do the test by Mr Gilmore some 10 years ago. It needs to be learned and you need to know your anatomy, where you are, what you're feeling, where you're going and how far to go, so please donâ€™t try this at home!!

This basically is how the test is done; using the little finger of the examiner's, hand it is possible to get access to superficial inguinal ring by pushing into the abdomen through the scrotum (this is known as invagination). In a normal inguinal ring, for the examiner, it feels like putting your finger into a glove. Itâ€™s usually a nice comfortable fit, and, although strange and unpleasant for the patient, itâ€™s relatively pain-free.

In a defective inguinal ring, the test tends to be extremely painful and itâ€™s usually possible to feel the tear In Jonâ€™s case it was more like putting my finger into a shirt sleeve than a glove: the tear was evident and it was extremely painful.

How is it repaired?

The operation is usually done under general anaesthetic and takes about 30 minutes plus the time to put the patient to sleep and bring them around after the anaesthetic. It involves an overnight stay in hospital, although I did have one patient who elected to have the procedure done by someone other than Mr Gilmore, under a local anaesthetic, and it was done as a day case.

Iâ€™ve been lucky to watch Mr Gilmore and his associate Mr Simon Marsh operate a number of times and the operation involves cutting down through the outer layers of the abdomen, locating the torn structures and then fixing them back in place prior to closing the wound by working back to the surface.

Varying times are quoted for return to play for a simple Gilmore's Groin, but 4 â€“ 5 weeks is the norm but, as always, is dependent on the patient.

What about the other procedure â€“ the adductor tenotomy?

If anyoneâ€™s interested I can explain this in more detail at a later date. Briefly for now - the procedure is relatively simple in that it involves cutting away or releasing tight connective tissue(s) in the groin that connect with the adductor muscles, of which there are three main ones, Adductor Magnus, Adductor Brevis and Adductor Longus. These three muscles are located on the inside of each of your thighs and are the main ones used when kicking or trapping the ball with the inside of the foot. Again, as with Gilmore's Groin, adductor tenotomy operations are relatively common in professional football.


Picture 1 is a diagrammatic view of the lower abdomen. 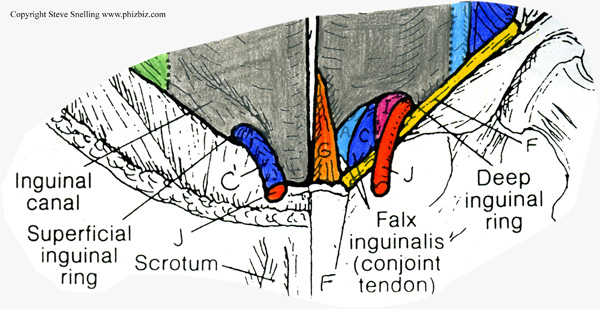 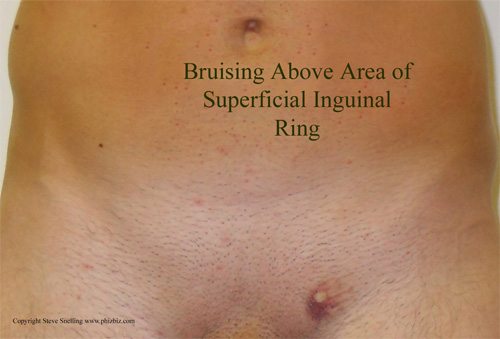 Picture 3 is a typical scar and bruising 7 days following a Gilmore's Groin operation. 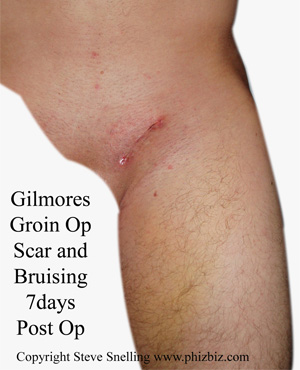