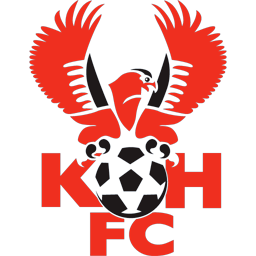 Exciting match in prospect on Tuesday

This could be one of the highlights of the season at Kingfield, so make sure youâ€™re there on Tuesday evening! Both games last season provided quality football, excitement and goals â€“ and thereâ€™s every chance that Tuesdayâ€™s match will provide more of the same, with both clubs coming off the back of superb wins on Saturday.

The Cards are in a rich vein of form at present with four wins in their last five games, the only â€˜blipâ€™ being a 2-0 defeat at league leaders Cambridge United. Those four wins have produced 13 goals, with on-loan star Jack Marriott grabbing seven of them and strike partner Scott Rendell netting five. Once again on Saturday the front two proved too hot to handle, as the Cards raced into a 4-1 lead at FC Halifax Town, a side that had previously won nine and drawn two at home, conceding only seven goals. The Cards eventually found themselves having to defend stoutly to preserve a 4-3 win but the three points were undoubtedly well earned.

As Garry Hill pointed out after the game, the front two may be reaping the headlines but a lot of credit must go too to the likes of Josh Payne, Kevin Betsy and Keiran Murtagh who are supplying the ammunition.

The Harriers narrowly missed out on promotion last season after recovering in astonishing fashion from a dismal start to the campaign. Their promotion challenge this season is gathering momentum: they now lie 3rd in the table, behind Cambridge United and Luton Town.

Might the Harriers get distracted by their FA Cup run, though? On Saturday they hammered Newport County 4-2 after galloping to a four-goal lead. If anyone can keep them focused, however, it is talismanic manager Steve Burr.

The Harriersâ€™ away record isnâ€™t outstanding. Theyâ€™ve beaten Braintree, Welling, Tamworth and Southport on their travels, drawn at Chester and Macclesfield and lost to Alfreton, Nuneaton, Dartford and Barnet.

Steve Burr strengthened the side in the summer with several impressive signings, including midfielder Lee Fowler from Doncaster Rovers and striker Joe Lolley, who augments an already-fine strike force which includes Michael Gash, Anthony Malbon and Amari Morgan-Smith.

There will be a bucket collection on Tuesday evening for the WFC Christmas Project, with donations being used to provide hampers to help the aged, lonely or financially-struggling families at Christmas.

The 56-page matchday programme on Tuesday includes plenty of interest for Woking and Harriers fans alike. James MacDonald recalls some memorable encounters between the two sides and profiles a great Harriers manager, Graham Allner. Harriers fan David Humphreys talks about the current Kidderminster side and assesses their promotion prospects. Ian Nicholson profiles promising Cards midfielder John Goddard. And of course there are all the usual match reports, previews, news and great photos. If you canâ€™t get to the game, you can order a copy from the Club Shop on shop@wokingfc.co.uk

A pulsating end-to-end encounter saw the Cards take an early lead, with Lee Sawyer scoring from a fine Kevin Betsy pass. But the Harriers equalised in the 16th minute, Nathan Blissett thundering in a header. The Harriers missed a penalty â€“ Aaron Howe making a splendid save â€“ before taking a 2-1 lead just before half-time, Blissett again converting.

The Cards gradually gained some ascendancy in the second half and equalised when Bradley Bubb took advantage of an uncharacteristic slip by Josh Gowling.

Another breathless encounter between these two sides saw the Cards deprive the league leaders of two vital home points. The Harriers started quickly and took the lead in the 13th minute when Gowling headed in at the far post from a corner. Against the run of play, the Cards equalised six minutes later when Bubb scored from the spot after being brought down by Demetriou. Both sides had more chances before the break but without capitalising. Woking began the second half confidently but found themselves behind again ten minutes later when Malbon scored after Gash had headed a deep ball back across the box. Harriers fans had barely finished applauding when Billy Knott scored a sensational goal, running right through the centre of the Kidderminster defence and beating the keeper from 20 yards. Woking had to survive some heavy pressure before collecting a hard-earned point.

The Cards make the long trip to North Ferriby United next Saturday in the 2nd Round of the FA Trophy and, the following Saturday (21 December), travel to Nuneaton. The Cardsâ€™ next home league game is on Boxing Day when high-flying Salisbury City are the visitors.

A 64th minute goal from Scott Rendell was enough to see Woking past promotion-chasing Kidderminster at a foggy Kingfield on Tuesday evening.

Garry Hill stuck with the same XI that recorded an impressive victory on the road at Halifax on Saturday. The Cards got off to a lively start with Banya taking the ball down 20 yards out from goal, running at the Harriers' defence and releasing a shot that narrowly missed Danny Lewisâ€™s near post.

Woking continued to press and were unlucky not to be a goal up when Kevin Betsy sent in a tempting cross from out wide which found Jack Marriott on the edge of the six-yard box. The Ipswich loanee's header was on target but at a comfortable height for the Harriersâ€™ â€˜keeper.

A strong Woking defence were keeping chances to a minimum but their forwards were struggling to find a breakthrough. The home side again went close when Josh Payne took aim from thirty yards and released a thunderous shot towards goal which ended up going marginally wide.

Despite being on top in the first half, Woking could have gone in at half-time a goal down after Joe Lolley went down in the area following a tackle from Mark Ricketts. Despite the Harriersâ€™ appeals for a penalty, the referee waved away the claims.

Both teams made a slow start to the second half and the first real chance came from a Payne free-kick. The midfielder again tried a long shot, this time it was on target but was straight at Lewis in the Kidderminster goal.

The breakthrough came shortly after when Keiran Murtagh played a great through ball to Betsy, who dribbled along the by-line and picked out Scott Rendell in the middle, who smashed home from close range.

The goal ignited some entertaining attacking play from Woking and saw back-to-back corners for the home side. However, they couldnâ€™t extend their advantage and were given a scare when Josh Gowling took the ball down on the edge of the six-yard box, spun and shot but couldnâ€™t find a way past Beasant in the Woking goal.

Woking continued to push for a second goal and when a brilliant through ball from Murtagh cut the Kidderminster defence in two Marriott found Banya on the edge of the box, but the wingerâ€™s shot was blocked.

The visitors were struggling to get past a resolute Woking defence and their only chances late on came from long shots from Marvin Johnson and Gowling but both failed to trouble Beasant as Woking held firm to take all three points and move up to 17th in the table.

Sponsor's MOTM : Mike Cestor - had a solid game at the heart of the Woking defence, breaking up play well and using the ball intelligently