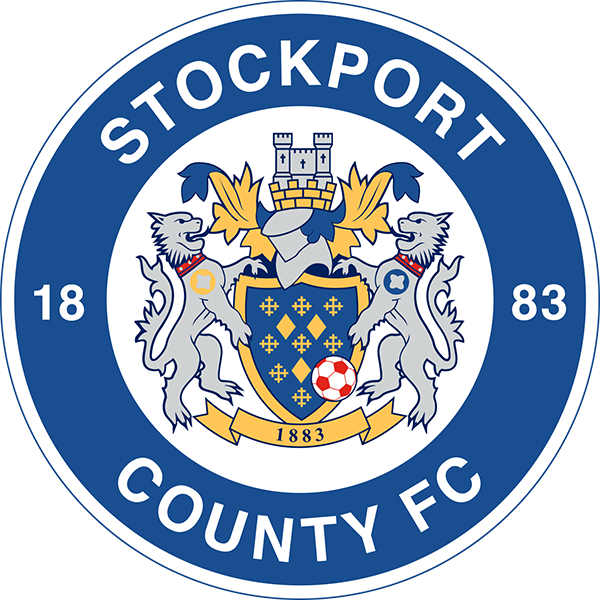 Cards look for away points

Garry Hillâ€™s side will have been given a huge tonic by their splendid 6-1 win over Nuneaton Town last Saturday. Now itâ€™s time to break that away duck! The Cards have been unlucky on their travels not to have picked up a point or two against some fancied sides. Letâ€™s hope that they can get off the mark on Saturday at Stockport County.

Garryâ€™s faith in his players was rewarded on Saturday when they notched a very convincing win after a run of four defeats. And they did it without the injured Mark Ricketts and (of course) Gez Sole, and with Loick Pires and Brett Williams both starting on the bench. Bradley Bubb showed great composure to grab his four goals, with the likes of Gavin McCallum, Lee Sawyer and Kevin Betsy giving terrific support. But it still needed Aaron Howe to pull off three top-drawer saves, including from a penalty kick, as some signs of defensive fragility lingered.

It seems unlikely that Garry will make many changes at Stockport, although he may want to play a slightly less attacking formation than last Saturday.

The Hatters had a tough debut in the Conference Premier last season, flirting with relegation until Jim Gannon took over from Didi Hamann and steered them to 16th place, notching five wins in their last seven games in the process. The general view pre-season was that Gannonâ€™s young side would fare better than last season but would probably not be one of the main challengers for the play-off places. They started well with two wins, at home to Alfreton and away to Grimsby Town, but their subsequent games have yielded three defeats (including home losses to Macclesfield and Tamworth) and three draws, including last Saturdayâ€™s respectable 0-0 draw at Newport County. They now lie in 15th place, just above the Cards, with the same number of points (9 from 8 games).

Some players worth looking out for include teenage keeper Ian Ormson, recently selected for the England C squad; experienced defender James Tunnicliffe, with some 150 League appearances to his credit; skipper Joe Connor in midfield; striker Danny Hattersley, signed midway through last season from Lancaster City, with a prolific goalscoring record; and promising striker Craig Hobson, brought in from Stalybridge Celtic. Gannon has just brought back midfielder Matty Mainwaring, who previously played for the club before joining Hull City and who had a loan spell at Edgeley Park last season.

By coach
The Cards Trust coach leaves Kingfield at 9.00am. The cost is Â£22 for Trust members and Â£29 for non-members. To find out if there are any seats left, ring the Club Shop or email shop@wokingfc.co.uk

By car
Exit the M6 at Junction 19 (sign-posted 'Manchester Airport, Stockport A55, M56 East') and at the roundabout turn right onto the A556. At the Bowden roundabout after 4.2 miles, turn right (sign-posted 'Manchester M56') onto the M56 motorway. Exit the M56 motorway after 6.9 miles (sign-posted 'Stockport M60, Sheffield M67') onto the M60. Exit the M60 at Junction 1 (sign-posted 'Stockport Town Centre'). At the roundabout, follow signs to 'Cheadle A560' also 'Stockport County FC' into Hollywood Way. Go straight on at the first set of traffic lights and turn right at the next (sign-posted 'Cheadle A560, Stockport County FC') onto the A560 towards 'Ye Olde Woolpack' pub. After 1.1 miles, turn left (no signpost, by the 'Farmers Arms') onto the B5465 Edgeley Road. After approximately 1 mile turn right into Dale Street at the traffic lights and take the second left into Hardcastle Road for the stadium.
There are a number of car parks near the ground.

Stockport Railway Station is about ten minutesâ€™ walk from Edgeley Park. Walk down steps from platform and turn left (opposite direction to booking office). Walk up Station Road, cross the main road at 'The Blue Bell' and continue up the hill towards the roundabout. Take the A5464 (Mercian Way) and turn left into Caroline Street for the stadium.

The Cards are at home the following Saturday (22 September) when high-flying Gateshead are the visitors to Kingfield. Please come along and give generously to the collection which will be held to defray some of the costs of Gez Soleâ€™s medical treatment.

Turn of the Cards for 1st away win


Wokingâ€™s very own dynamic duo of Garry Hill and Steve Thompson pulled off another Cardsâ€™ trick to take the points out of County, the first success on their travels this Conference National season.

Mark Ricketts was welcomed back in a 4-3-3 (actually 4-1-2-3) set-up against Stockport's two up front. They were first to show, Rowe shooting wide as Joe McNerney was lobbed. Countyâ€™s probing of central defence was countered by the quicksilver Bradley Bubb who, in on Mark Ricketts' pass, managed to roll the ball across an open goal area but it was hacked away.

McNerney recovered in his own area to get a vital foot in on Rowe. On the right Kevin Betsy (pictured) back-headed for Bubbâ€™s diagonal curler from well out to beat Ormson's flail, saved by the inside of his post. Woking scented blood and Adam Newton, well forward, set up Betsy for another dangerous cross. But when McNerney trapped Rowe on the flag wide right to concede a corner, Sheridanâ€™s kick found Kenyonâ€™s near post leap to deflect past Howe and it was 1-0.

The Cards teetered, Mainwaring, returning to the County fold, drove down the left supplying Countyâ€™s full back Newton and when his cross was headed back only diving bodies blocked Hattersley's swing on the penalty spot. Mainwaring crossed again for Howe to flap away and as Betsy broke to free Bubb, close in on the right, Ormson blocked for a corner from which Ricketts shot over.

Stockportâ€™s Sam Sheridan was pulling strings and found time to raid on the right and skim the goal area without a touch from anyone. Gavin McCallumâ€™s touchline surge from his own half was only ended by a foul at the corner stick. But County hadnâ€™t read last weekâ€™s script as the next time he was fed he cut inside firing across Ormson and into the bottom corner, 1-1.

The Cards were creating space now, as Betsy and Bubb interchanged sweetly. Ricketts' crunch tackle in the centre circle sent Betsy away without success this time, but Lee Sawyer picked up the pieces from a corner won and Bubb shot wide from his pass.

Rowe nutmegged Newton and wriggled past Ricketts on the goal line to fire against Howe point blank and a Hattersley header was wide from a deep right-hand cross. As play switched, Ormson slid out to foil Bubb as a back pass caught him short!

It should have been Woking's turn for a stoppage time strike in the one minute of added time, but Jack Parkinson failed to rise above a flighted free-kick when all alone on the far post and it went over.

The Cards were well in the hunt after an unsteady start in central defence with some excellent pass and move in an intriguing first half.

Dean Sinclair coming on for Mark Ricketts as the second half started made little difference to County as they quickly gained the upper hand with a bombardment from the flanks, Sheridan hunting the ball to the right-hand corner before play was held up for Roweâ€™s nosebleed. On the re-start Sawyer fed Bubb and Betsy snaked into the centre towards the goal, but his shot was tame.

Mainwaring, freed by Sheridan again, saw his low cross hammered wide at the near post with desperate Woking cover. McNerney cleared only for Rowe to rise but his steepling header was palmed over by Howe. Mainwaringâ€™s surge was not closed down as he shot over, Kenyonâ€™s right-wing run and Sean Newtonâ€™s left-wing cross drilled across the face of goal went clear.

This was enough for Garry Hill to put on Loick Pires for McCallum and the Cards went 4-5-1 to try to stem the tide. Mainwaring rose above Newton on the far post to head over and Kenyon, played in behind Doyle, was only foiled by Howeâ€™s vital block. County threw on striker Hobson but it was Bubb who threaded the ball through to Pires in an inside right channel for him to find Ormson's bottom left-hand corner as Edgeley Park froze. Woking were in front!

Stockport pressed the Cards again but Whiteheadâ€™s right-wing run was stopped unfairly and free-kicks mounted. Manager Gannon had seen enough to make his move and Meaney and Nolan joined the action for Rowe and Sheridan, only for Nolan to trip Betsy in the centre circle as he broke and get a yellow card. Adam Doyle tackled and led a charge for Bubb to feed Sawyer but he shot wide. Nolan lunged at Doyle and caught him late as he cleared. A second yellow, harsh, but he was off.

County sagged. With five minutes â€˜extra timeâ€™, they put the high balls in and Hobson was half-impeded as he turned on the spot for Howe to collect. Instead Mike Cestor on for Bubb and Parkinsonâ€˜s chip and run along the bye line set up Sawyer in the centre but his sliding shot was wide. Howe charged out amidst his own defenders to hack clear. Betsy raided once more and, having left his man inside the box, sliced just wide but Pires should have stayed onside as five faced three on the break. This left Mike Cestor to spin out time with a cameo of corners and free-kicks.

The Cards survived their uncertain start and heavy pressure in the second half to deserve these points for their tight midfield and dangerous counter-attacks, a vital boost to the early season effort.

MotM: Kevin Betsy, who beat his man or men with regularity and still found time and energy to hunt down opponents to set his own men free.